This Spring we have a new batch of schools who have committed to mobilizing students across various different campuses around the issue of raising awareness on human trafficking. The reach of our partnership with the National Consortium of Academics and Sports, has been successful since the launch in 2014. Stories give life to the program – check out Lana’s story and how her involvement in Shut Out Trafficking has granted her an opportunity to be a leader at Florida International University!

My name is Lana Pohlmann, and I am Senior at Florida International University (FIU) in Miami, FL, studying International Relations and Political Science. These are two very broad majors, and up until the previous semester, I was unsure of how I should best incorporate my studies into an appropriate future career. Yet, this past summer I got the opportunity to intern at a local anti-human trafficking NGO, in my hometown of Sarasota, FL. “More Too Life”™ works for the advancement of victims of human trafficking and is at the forefront of rescue, victim care, training and mentoring, as well as closely with local law enforcement and advocacy to address the root causes and prevent the high demand of this industry.

Human trafficking derives from an array of societal issues such as poverty, homelessness, family instability, early childhood molestation and rape that are often overlooked by lawmakers and task forces when addressing this crime. Human rights have always been a passion of mine, and through word of mouth, I discovered this impactful organization operating right outside my neighborhood. During my first few days at the center I came to the realization that “neighborhood” is a keyword in this institution, as, contrary to popular belief, a great amount of these incidents actually occur right before our eyes. I was fascinated by the work More Too Life does and what an impact they are able to make in the local community, as well as all along the west coast of Florida, covering four bordering counties. I was fortunate enough to be adopted into the small team and got the chance to participate in street outreach, talk to the affected individuals one-on-one, and learn more about how such a non-governmental grassroots organization works day and night to accumulate the necessary resources to help those in need. 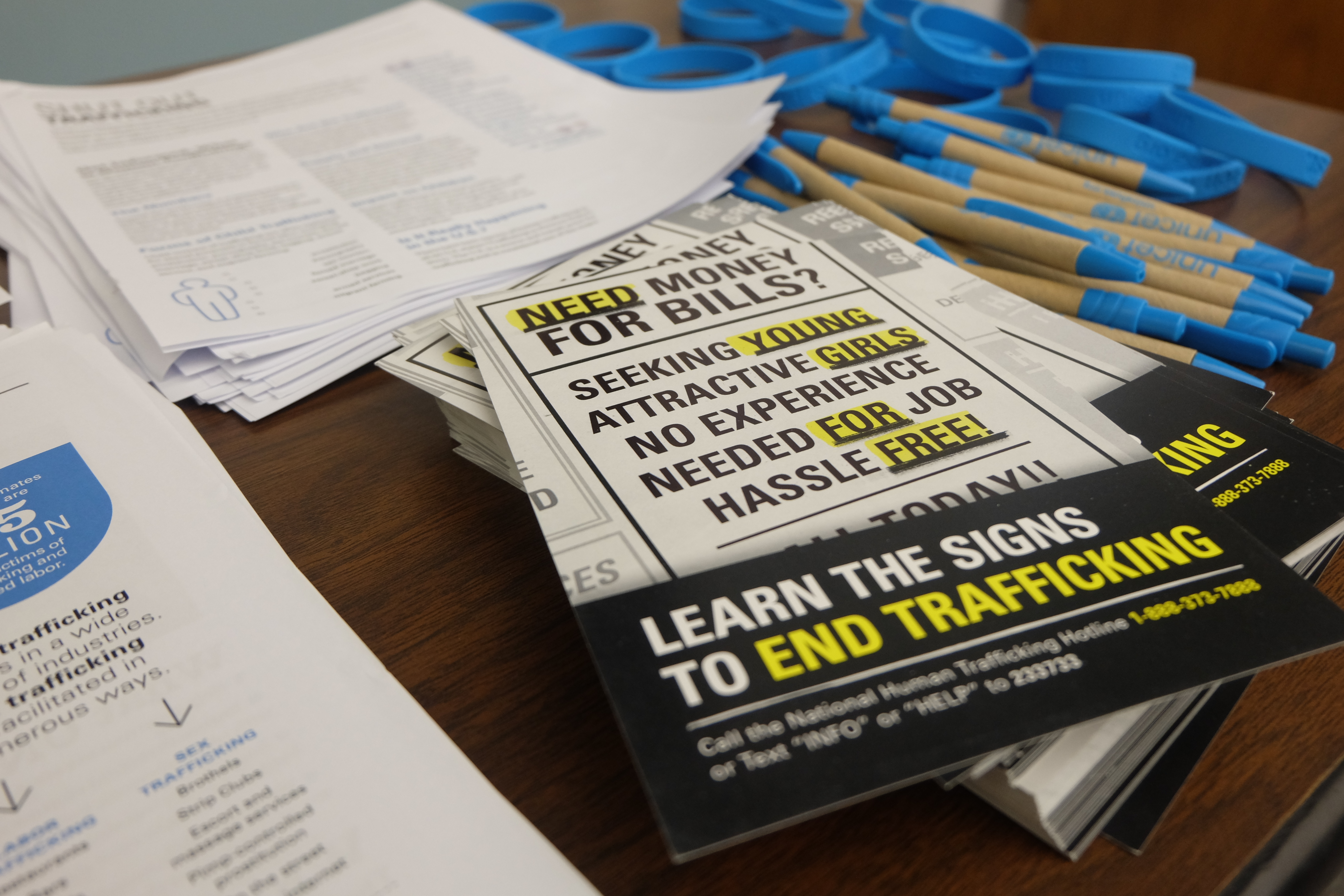 Returning back to FIU after this impactful summer experience working for people affected by human trafficking, I knew I wasn’t going to stop there. Being a part of the UNICEF Club and the student chapter of UN Women on campus, I was determined to gear our work for this semester towards this specific issue, especially because the greater Miami area is a hub for human exploitation. Together with the U.S. Fund for UNICEF, the FIU Women's Center, the FIU Athletic Department, and several other student organizations, I was able to collaborate with, and participate in, FIU’s first “Shut Out Trafficking” week. Throughout the second week of November, we organized a variety of events to address the different groups of students represented on our campus, with special guest Edgar Cruz, the human trafficking fellow from the U.S. Fund for UNICEF.

On Monday Edgar spoke at informational sessions with the student-athletes and coaches from the various sports who came together to learn more about the prevalence of these kind of incidents within their teams and facilities. On Tuesday, the powerful film “Not My Life” was shown, which added a further visual impact of this crime on a global scale to the attending FIU community members. On Wednesday the FIU UNICEF Club, UN Women, NOW, and other campus organizations tabled in our Student Union, informing students about the ways they are exposed to human trafficking in their daily lives, through buying products and services of child labor, underpaid domestic and migrant work, or even prostitution. As this is a globally-minded university, we felt the need to highlight the impacts of human trafficking taking place not only in our area but all around the world as well. 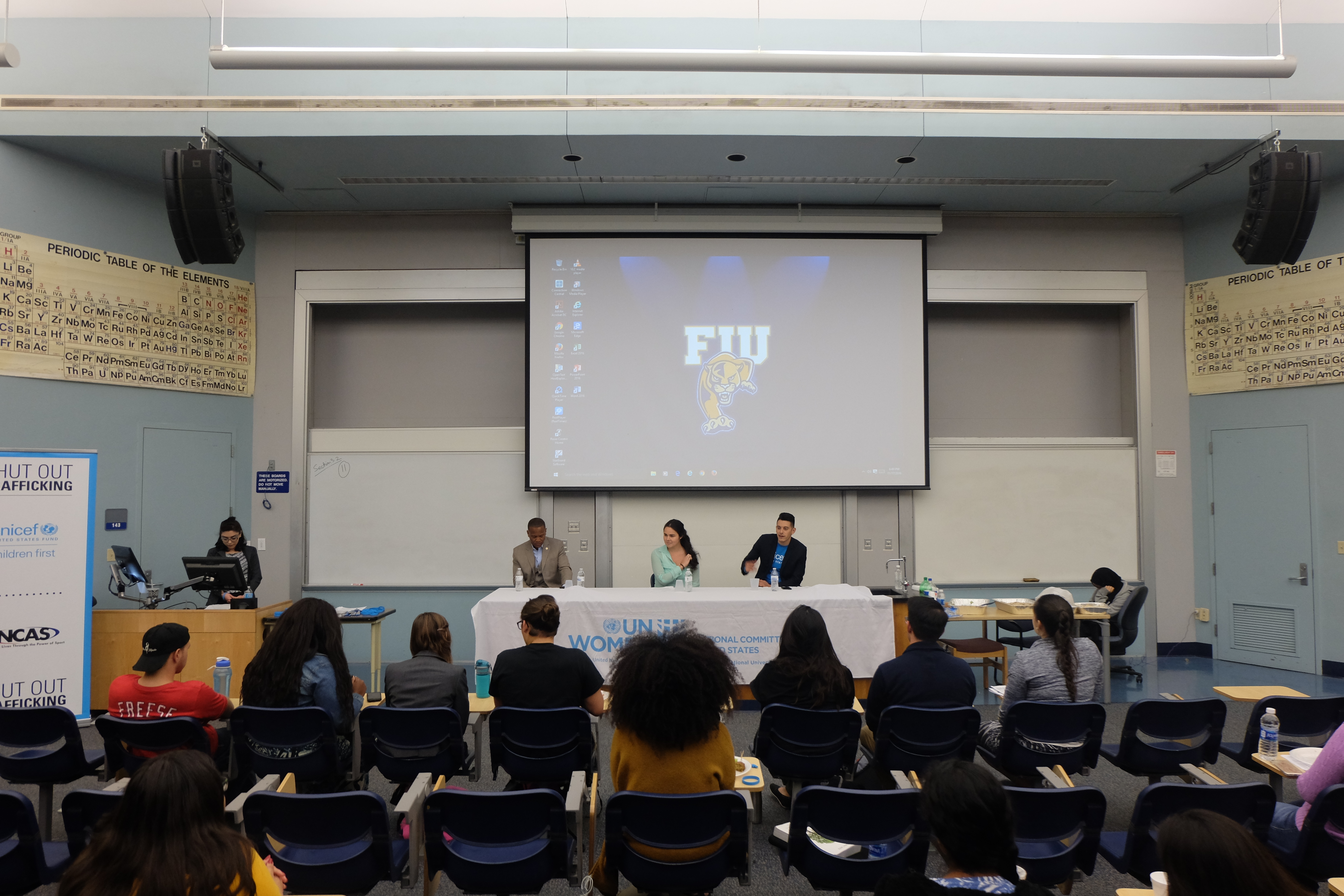 The final event on Thursday was the most exciting day for me, as I was one of the key facilitators for organizing a student-led panel discussion on human trafficking, with our U.S. Fund for UNICEF human trafficking expert, Edgar Cruz, and Homeland Security Special Agent, Victor Williams. As our third panelist unexpectedly dropped out, I was asked to step in last minute to represent the university student’s perspective. It was a bit nerve-racking at first to speak next to experts that have been in the field for many years, yet I was happy to share the information I learned and experiences I gained over the summer, and gave a call to action to my fellow students to work together and keep an eye out for anything suspicious that could be linked to human trafficking.

Personally, Shut Out Trafficking Week at FIU allowed me to further expand my knowledge on human trafficking, locally as well as internationally and provided me with some tools on how to advocate on the issue in a university campus setting. We are all against it, but very few know how to tackle it rather than just ignoring it because they believe it does not affect them personally. Receiving feedback from my peers I am certain there were a lot of takeaways from this eventful week, which reached well over 500 students at FIU, and I hope we get the chance to host similar events again in the near future. Human trafficking is one of the fastest growing crimes out there which is why I believe now is the time to speak up for those who are silenced.

The End Trafficking project is the U.S. Fund for UNICEF’s initiative to raise awareness about child trafficking and mobilize communities to take meaningful action to help protect children. We do this by conducting workshops, facilitating film screenings, advocating for federal and state legislation and educating the American public on UNICEF’s work to protect children globally.