Dillan Prasad and Celia Buckman, students at New Trier High School, have shown an interest in  UNICEF’s work for several years. They began as Young Ambassadors for UNICEF in middle school and after building a critical mass at New Trier, they are now an official UNICEF Club! The UNICEF High School Club program gives students an opportunity to learn about UNICEF’s work around the world and raise awareness and funds in their communities. New Trier is the 13th High School Club in Illinois, and joins more than 380 around the county.

Senator Kirk’s visit to support New Trier’s UNICEF Club comes just weeks after the UNICEF Midwest Board made a trip to DC to meet with the Senator’s staff. They encouraged the Senator’s support of UNICEF, and were excited to participate in the launch of the UNICEF club at the Senator’s former High School.

On May 26, Senator Kirk, a graduate of the class of 1977,  visited New Trier and spoke with UNICEF Club members about the importance of UNICEF’s work and global citizenship. He encouraged students saying, "The most effective thing you can do is learn a foreign language. It will really set you apart. You can really accelerate yourself." 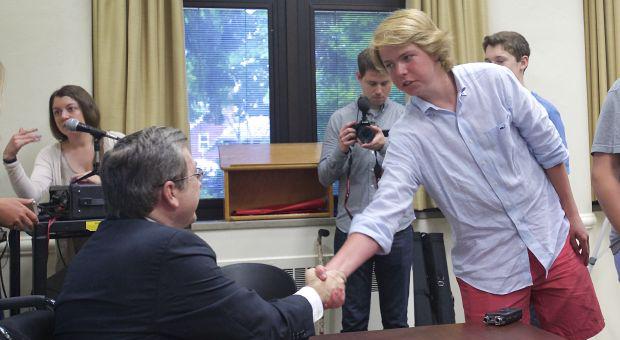 Dillan Prasad, one of the club leaders who had an opportunity to represent UNICEF at the G7 summit in Germany, spoke passionately about why being involved is important to him. "Growing up in a privileged area, I tend to see a lot of money spent on material things," Prasad said. "The goal of the UNICEF club is to inspire the children of the North Shore to help and to give back. My goal with UNICEF is to shift the priorities of my peers."

The press was out to support the event and it made headlines in the Chicago Tribune as well as local news outlets. Pioneer Press reporter Bridget O’Shea reported on the club saying “New Trier sophomore Celia Buckman said the club plans on raising funds and awareness to inspire fellow students to participate in political action.”

Community support for UNICEF is important, as is political support. Senator Kirk and other legislators will be voting on whether to maintain fiscal support of UNICEF when they consider the appropriations in the next couple weeks. We are asking our  advocates and supporters to send a quick messages to their Senators and Representatives asking them to put children first, and maintain $132 million in funding for UNICEF’s life-saving work around the world.