A Retired Teacher Champions Women and Children Threatened by Tetanus

A leader among fundraisers in the global fight against maternal and neonatal tetanus talks about what moved her to take action against this cruel, centuries-old — and vaccine-preventable — disease.

Judy Kramer was outraged when she learned that maternal and neonatal tetanus (MNT) was killing tens of thousands of babies every year — even though there was a vaccine to prevent it.

“I was really shocked,” the 74-year-old retired high school math teacher from Palo Alto, CA, recalled in a recent interview. “My feeling was, we’re living in the 21st century. Come on, there’s no way this should be happening.”

Kramer, an active Kiwanis member, channeled that outrage into what would ultimately become the biggest fundraising drive ever organized by a single North American club in support of The Eliminate Project, a partnership Kiwanis International and UNICEF formed in 2010 to eliminate MNT everywhere it threatens mothers and babies. 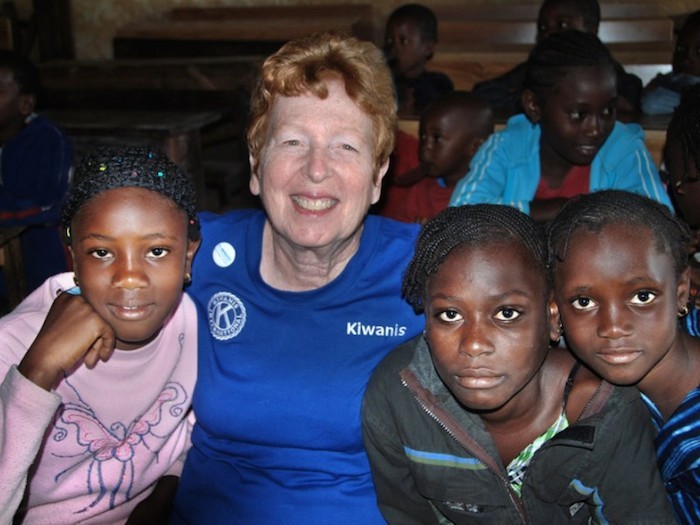 Judy Kramer poses for a photo with three young women she met while visiting Guinea in 2012. Kramer's trip had a catalytic effect on her campaign to raise funds in support of The Eliminate Project, a partnership between Kiwanis International and UNICEF to help wipe out maternal and neonatal tetanus (MNT). Kramer and her Kiwanis Club raised more than $400,000 for the cause, money that will directly support efforts to immunize all women and girls of reproductive age in countries where MNT remains a threat. Guinea is one of 15 countries still working toward elimination. © Judy Kramer

Kramer had been involved in many different issues over the years, advocating for peace in the Middle East and leading community service projects as a longtime member of her local Kiwanis club. But there was something about tetanus that struck a different chord.

“It was an opportunity to have a very direct impact on children’s lives, and their mothers," says Kramer. And joining the fight against MNT felt refreshingly uncomplicated, because with The Eliminate Project, she explains, "you know exactly where the money is going" — toward wiping out a cruel, centuries-old, yet highly preventable disease.

With The Eliminate Project, you know exactly where the money is going.

Kramer's passion proved infectious. From the time of launch in 2011 through December 2017, she helped generate more than $400,000 in contributions from members of her club. The amount is even more impressive considering it currently costs only 63 cents to procure syringes and three doses of the tetanus toxoid vaccine, which will immunize a woman of reproductive age against the disease, protection that is passed on to her future babies.

Women who are not vaccinated risk infection during childbirth through exposure to tetanus spores, a natural part of the environment. Unsanitary conditions in the area where a mother gives birth, or the use of a contaminated instrument to cut the umbilical cord, typically cause tetanus infection, which is almost always fatal for the newborn, and sometimes for the mother as well. To spare mothers and babies this agonizing fate, The Eliminate Project also supports training, social mobilization, transportation and other activities to ensure that women receive the necessary vaccines.

It costs only 63 cents to procure syringes and three doses of the tetanus vaccine, which will immunize a woman of childbearing age against the disease and protect her future babies.

Unlike smallpox or polio, viruses whose sole biological reservoirs are other infected human beings, tetanus cannot be completely eradicated. The bacterium that causes it, Clostridium tetani, exists widely in the environment and in other animals.  However, it can be eliminated within countries and across regions through comprehensive and routine immunization. In 1999, MNT posed a considerable risk to women and their babies in 59 countries. Today, that number has shrunk to 15, thanks in large part to The Eliminate Project, supported through fundraising efforts like Kramer's. 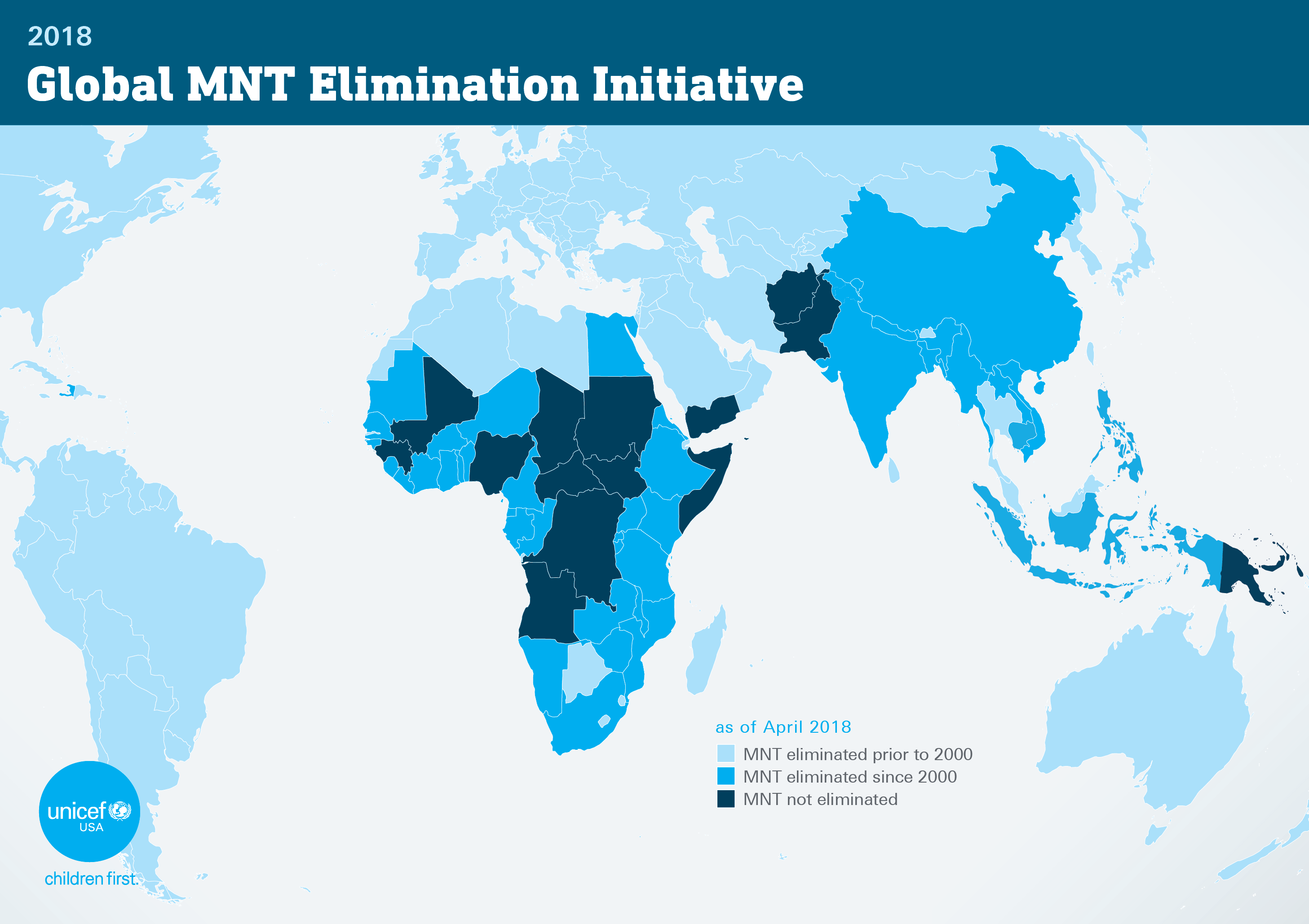 There has been tremendous progress toward eliminating maternal and neonatal tetanus in recent years. But there are 15 countries still working to close the immunity gap among women of reproductive age and become certified as having eliminated MNT. Source: WHO/UNICEF Database.

A field visit to Guinea in 2012 had a catalytic effect on Kramer's activities. It was also an eye-opener for Kramer and her fellow Kiwanis members and travel companions. They all got a first-hand look at the many health challenges and hardships women, children and families face in one of the world's poorest countries.

"We went to the opening ceremony of a 10-day immunization campaign," Kramer recalls. "Local leaders spoke. I sat with the women. They were all beautifully dressed in these gorgeous fabrics, and they loved to have me take pictures of them with their babies. After the festivities, all the women lined up to get their shots. They were getting the third of three to complete the course. Each woman had a card that showed that she had gotten the first two. It was quite a community event." Women line up to receive their tetanus shots during a community immunization event in Mali prefecture, Guinea, organized by UNICEF and local leaders. © Judy Kramer

Vaccination campaigns like this one often prompt women to seek other basic health services for themselves and their children, Kramer notes, including vaccines to protect against highly contagious yet preventable diseases like measles, and screening for malnutrition, a major problem in Guinea. "I was really impressed that people did as much with the resources they had there," Kramer says.

After returning from her Guinea trip, being able to share her experiences had a powerful impact when she participated in speaking events at club meetings across her district. "I think my trip really personalized the issue for people, and made it much more concrete." Donations of all sizes poured in.

Kramer's efforts to galvanize support for the elimination of MNT is rooted in her belief in the power of citizen diplomacy. In the early 1990s, she worked on behalf of Beyond War (an organization that became the Foundation for Global Community), participating in activities designed to foster constructive dialogue between Israelis and Palestinians. She traveled to Jerusalem, Cairo, Amman and Damascus with the U.S. Inter-religious Committee for Peace. 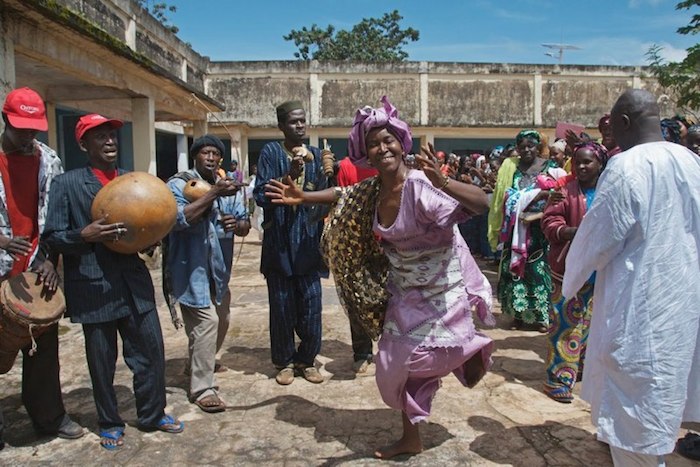 A national immunization campaign is cause for a community celebration. Music and dancing are among the festivities to kick off vaccination efforts in Guinea's Mali prefecture in 2012. © Judy Kramer

Navigating complicated Middle Eastern politics is as tricky as it gets, Kramer acknowledges. To successfully engage Americans in such a cause, you need to provide a window into other cultures — a chance to understand other perspectives, to get the message across that no matter where we are from, we are all human beings. Kramer says she found the same holds true when attempting to inspire support for an issue like the elimination of MNT.

Her three grandchildren — ages 11, 7 and 2 — are a motivating force, and a constant reminder of the need for more global citizens. "It's fine to think America First, but we're all in the world — and things can't be good for America if they're not good for other people in the world," Kramer says.

"What really resonates with me, and motivates me is something Marian Wright Edelman said: 'Service is the rent we pay for living on earth.' The basic rule of life is that the current generation ensures the survival of the next one, and we're not doing a very good job of that."

Service is the rent we pay for living on earth.