The death toll is nearing 400 as the search for survivors continues. UNICEF is on the ground, ready to help.

UPDATE 12/27/18: At least 429 people have been reported dead and an estimated 15,000 people have been displaced; most are staying with friends and relatives in nearby villages. UNICEF Indonesia is providing lifesaving supplies, along with technical assistance on nutrition and child protection issues.

UPDATE 12/24/18: As many as 1,500 are wounded and at least 128 are missing, according to Indonesia's disaster management agency. Authorities are urging residents to stay away from beaches; continued volcanic activity could cause more waves in the coming days.

Rescue workers are using heavy machinery and their bare hands to search for survivors after a tsunami struck the coast of Indonesia late on December 22. The death toll has risen to nearly 400, according to the Indonesian National Agency for Disaster Management.

The tsunami swept away cars and uprooted trees, leaving a trail of devastation 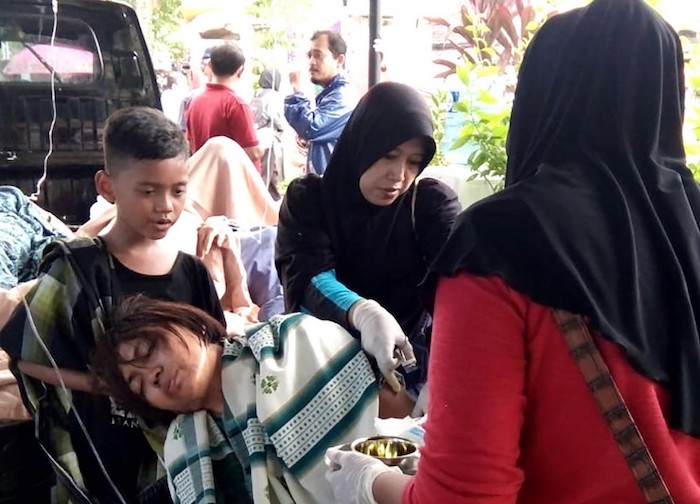 First responders tend to a victim of the tsunami that hit coastal areas around Indonesia's Sunda Strait on December 22. © UNICEF/UN0267263/Semi/AFP-Services

The death toll is expected to rise as health centers continue to report new casualties. At least 556 buildings were heavily damaged, including nine hotels, along with hundreds of boats. The tsunami hit the Pandeglang and South Lampung districts.

UNICEF is prepared to assist as needed

UNICEF is on the ground to accompany the authorities as they assess the impact of the tsunami on children, to ensure that children are at the center of the national response and their rights are upheld.

The tsunami is the latest in a series of natural disasters that have hit Indonesia in recent months. Massive earthquakes shook the island of Lombok this summer, and a powerful tsunami and 7.4 quake struck the island of Sulawesi on September 28, killing more than 2,000 people and leaving 212,000 homeless.

UNICEF and partners are working tirelessly in Indonesia, Syria, Yemen, South Sudan, Bangladesh and around the world to save and protect children. With a presence in 190 countries and territories, UNICEF has helped save more children's lives than any other humanitarian organization in the world.

Photo at top: A young woman stands surrounded by wreckage after Indonesia's December 22 tsunami left a trail of destruction in its wake. © Arimacs Wilander for UNICEF