Refugee Dads Recognized by UNICEF for the Power of Love

Refugee Dads Prove the Power of a Father's Love

Displaced from their homes by violent conflict, persecution and economic instability, these refugee children all have one thing in common: loving fathers who are determined to support and protect their children against all odds.

A nurturing environment is a powerful buffer against trauma, reducing a child's exposure to toxic stress and providing the comfort and security all children need to thrive.  These super dads have kept their families together in times of crisis and given their all to ensure that their children grow up safe and strong, with hope for a brighter future. For Father's Day, UNICEF celebrates the enduring power of a dad's love. 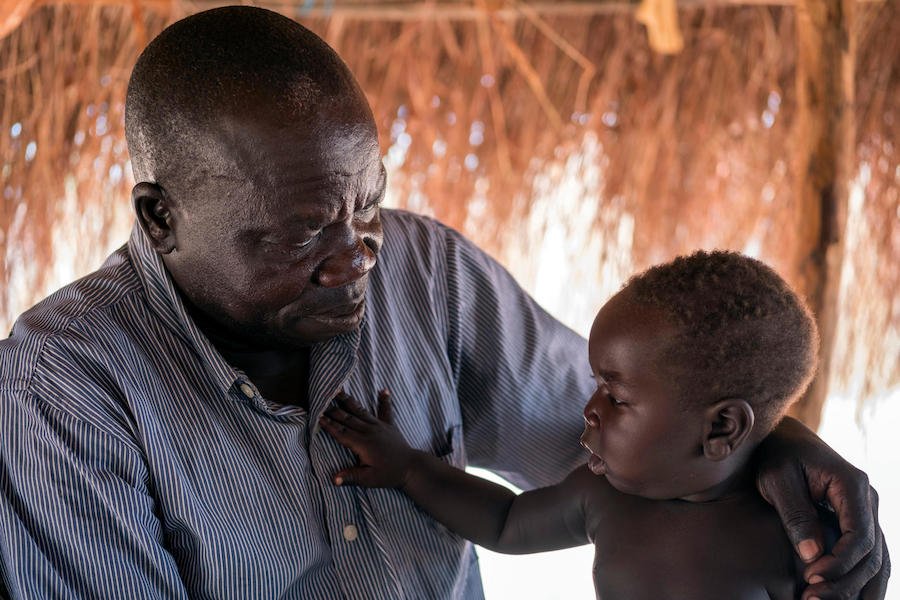 "My father died when I was three years old," says South Sudanese refugee Abura Silvano, 50, sitting with his 6-month-old son, Luke Given, outside their shelter in Bidi Bidi refugee settlement in northern Uganda. "It shaped how I am today. I want to support my children to keep them healthy. I want to teach them how to play."

Silvano and his wife, Ajonye Eva, 38, fled their home in Morobo, South Sudan with their nine children in 2016. "We were harassed along the way and threatened with guns. We had to pay them to continue our journey," he says. "I sold everything and bought a car with my neighbor. We all traveled in it. When we crossed the border into Uganda, we were received well. We got food and shelter." © UNICEF/UN064690/Ose 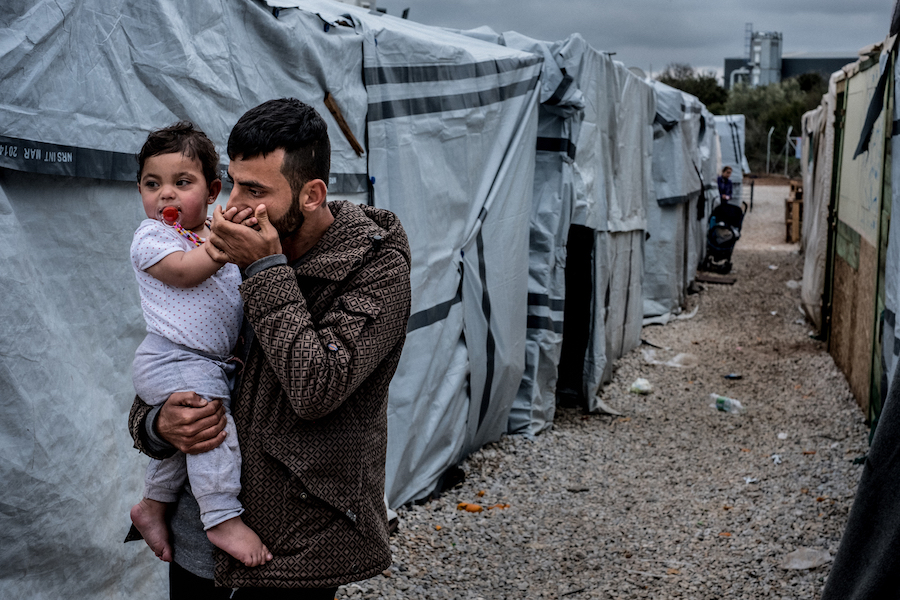 When children spend their earliest years in a nurturing, stimulating environment, new neural connections can form at a once-in-a-lifetime speed of 1,000 per second. These connections help determine children's health, ability to learn and deal with stress, and even their earning capacity as adults. Exposure to violence and a lack of stimulation can prevent these neural connections from forming. Iraqi Kurdish refugee Barzan Hassan, 24, from Erbil, Iraq, holds 1-year-old Yamar outside their shelter in Ritsona refugee camp near Chalcis, Greece. The camp, which houses about 900 people, was set up in 2016 after Central Europe closed the Western Balkan migration route, trapping large number of refugees in limbo in Greece. © UNICEF/UN057931/Gilbertson VII Photo

Children whose fathers read to, play with and sing to them know they are loved. They are primed to become better lifelong learners and healthier young people. Rohingya refugee Saber Ahmed, 28, plays with his 18-month-old daughter Mobashera Bibi inside the shelter he shares with his pregnant wife Sadekunnahar, 26, and another daughter in Burmapara makeshift settlement, Cox's Bazar district, Bangladesh. The family was forced to flee their village in Myanmar when it was attacked by the military in a campaign against the Rohingya that UN officials have called "a textbook example of ethnic cleansing." © UNICEF/UN0155602/Sujan 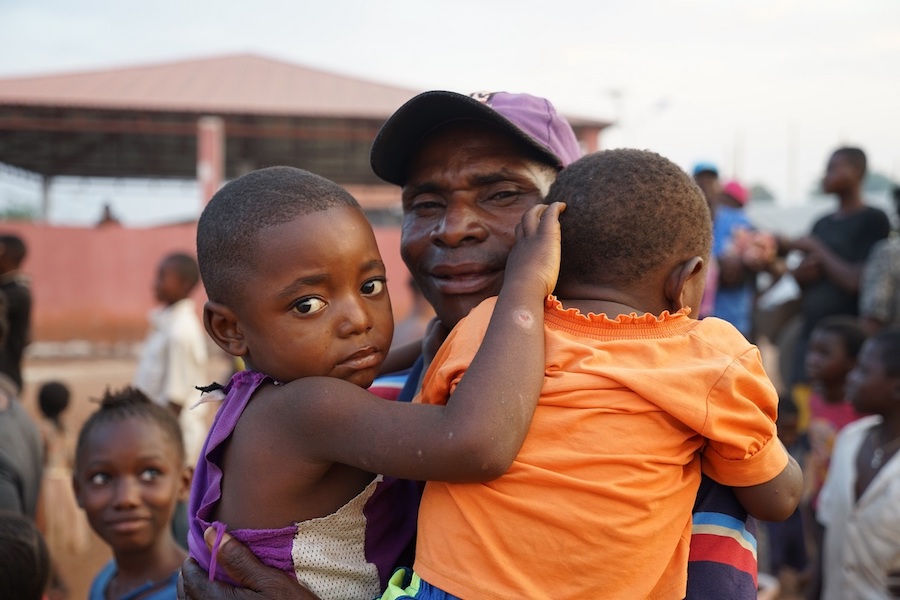 The children of loving, attentive fathers have better psychological health, self-esteem and life satisfaction in the long term. A father from the Democratic Republic of the Congo smiles with relief after reuniting with his children at the UNICEF-supported Cacanda reception center for refugees in Dundo, northern Angola. © UNICEF/UN067870/Wieland 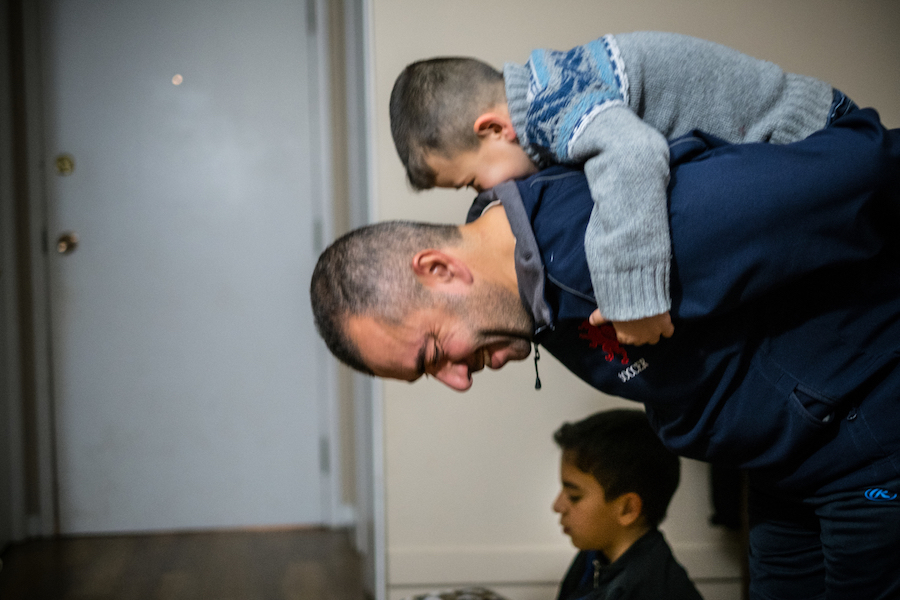 Syrian refugee Amjad Al Rashdan, 42, plays with his children Basel, 11, and Idress, 5, at home in Charlottetown on Prince Edward Island, Canada. The Al Rashdans were the first Syrian family to be resettled in P.E.I. in late 2015. Immigration accounted for 80 percent of Canadian population growth between 2017 and 2018; 20 percent of the country's population is foreign-born. In 2017, Canada admitted 286,479 permanent residents, including economic migrants, refugees and family reunifications, and unveiled an ambitious plan to welcome more than 1 million immigrants by 2021.

"It was really fast and very sad," says Basel, remembering what his father told him as they left their family home during heavy fighting in Syria. "Just take your very important things and put them in a small bag and come with us." At first, Basel was afraid to come to Canada, but with his father's support and encouragement, he now his considers himself Syrian-Canadian and is proud to be Canadian. © UNICEF/UN046031/Gilbertson VII Photo

This Father's Day, help UNICEF protect children around the world by making a donation in your dad's name and sending him a personalized e-card.

Photo at top: Driven from their home in Morobo, South Sudan by violent conflict, Abura Silvano (center) and his wife, Ajonye Eva, live with their nine children, including 6-year-old Jimmy Baraka, and 6-month-old twins, Luke Given (left) and Timothy Ajo, in a shelter at the Bidi Bidi refugee settlement in northern Uganda. © UNICEF/UN064683/Ose