As the world raced to fight the pandemic in 2021, another global threat was very much on the mind of young people as well: the growing climate crisis. From the possibility of a climate-driven famine in Madagascar to recent extreme weather in the Philippines, we've seen examples throughout the year of how rising temperatures are wreaking havoc on communities around the world. In November, world leaders and activists convened for COP26 — the 26th Conference of the Parties to the 1992 United Nations Framework Convention on Climate Change — in the hopes of addressing this pressing issue. But were the agreements made enough to protect future generations? Are there reasons to be hopeful about climate action in 2022?

As we look back at the year, we asked Ashley Lashley, a UNICEF Youth Advocate, and Salma Abdi, a UNICEF USA National Youth Council Member, to share their reactions to this landmark conference. 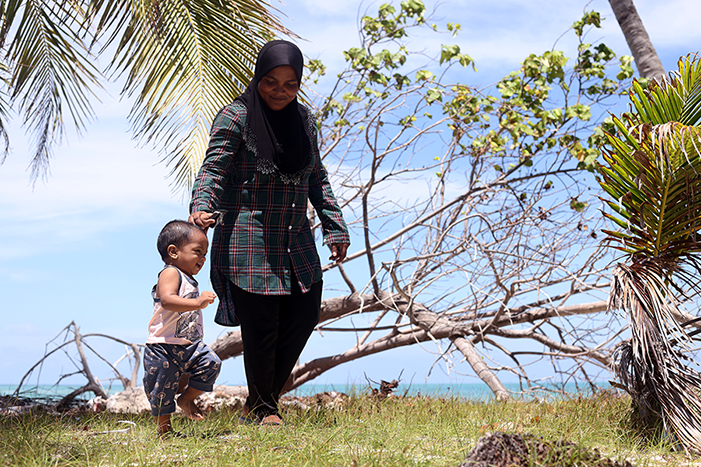 A mother and son walk along a stretch of severely eroded beach in Dhiffushi island, Maldives. Local authorities estimate that over 200 feet of beach have been lost in the past few years alone, one of many consequences of climate change felt on the small island nation. © UNICEF/UN0543204/Faheem

Ashley Lashley, on why young people need to be part of climate discussions:

As a UNICEF Youth Advocate and climate activist from Barbados, I had the opportunity to travel to Scotland to serve as the Youth Delegate within the Barbados Delegation at COP26.

It was an exhilarating experience for sure, but it was also disappointing.

Many governments did not include youth in their delegations, even though we are the ones that will be saddled with the burden and responsibility of driving outcomes at future COPs to bring about meaningful change. The commitments and outcomes of COP26 seem fleeting with targets that may never be realized. I witnessed that some leaders from developed countries were reluctant to commit to much-needed reductions of greenhouse gas emissions and accept responsibility for the climate crisis. Further, the shifting goal posts around deadlines — which demonstrate a lack of serious commitment to the ideals of COP26 — proved to be another disappointment. World leaders are not serious enough in taking proactive measures today.

Amid these shortcomings, I found hope. I coordinated an Open Dialogue between approximately 15 youth from Small Island Developing States (SIDS) and Mr. Selwin Hart, Special Adviser to the Secretary-General on Climate Action and Assistant Secretary-General for the Climate Action Team. We discussed important issues affecting youth from SIDS and the need for more financing for youth climate and environmental entrepreneurship programs.

One thing has become clear to me through all of this: we as young people should be leading COP27 processes from start to end.

During this conversation, we discussed our reality as youth from SIDS, from serious environmental issues our countries face to the exasperation we feel as a result of leaders from developed nations letting us down time and again. As young people, we can take a stand through this dialogue and demand that world leaders take more action.

Looking ahead to COP27, we must hold leaders accountable. One thing has become clear to me through all of this: we as young people should be leading COP27 processes from start to end. We would get far more meaningful results.

Salma Abdi, on why bolder action is needed to avert the worst potential dangers of climate change:

I believe that climate change is a child rights crisis and that young people’s voices matter when discussing climate action. Despite contributing least to the climate crisis, children are most vulnerable to the impacts of climate change. UNICEF’s Children’s Climate Risk Index shows that the climate crisis affects children's health, access to nutrition, survival, education, development and more. The climate crisis also poses an existential threat to marginalized communities around the world. Young people are increasingly speaking up about the effects of the climate crisis as we recognize that inaction today could result in a decreased quality of life for us in the future. 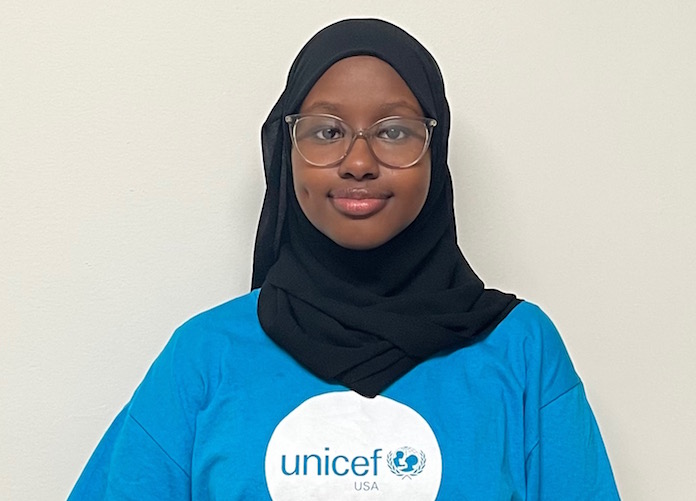 For UNICEF USA Youth Council Member Salma Abdi, participation in COP26 underlined the inadequacy of current policy objectives: "It is up to young people to continue pressuring our leaders and make our collective voices heard."

Data suggests that the world needs to limit the temperature increase to 1.5 degrees Celsius by 2030. This leaves only nine years to lower emissions and move toward a greener global economy. Failure to do so increases risks of natural disasters, reduces access to safe water and more. Given the consequences, we must ask, “What came out of COP26 and is it comprehensive enough?”

To me, the answer is no. While 151 countries submitted new climate plans to reduce their emissions by 2030, this action would still leave the world with an increase of 2.5 degrees Celsius by the end of the century. This number is well beyond the maximum value of 2 degrees Celsius outlined in the Paris Agreement.

We’ve already seen what youth can achieve together. Over 100,000 young people marched in Glasgow, showing that climate change is a child rights crisis that affects every aspect of a child's life.

COP26 also failed to create a new finance facility dedicated to the loss and damage caused by the climate crisis. Funding could go a long way towards protecting youth in climate-vulnerable nations. Though leaders agreed to continue the discussion about alternate funding mechanisms, countries have clearly fallen short of the $100 billion in climate funding promised at COP15 in 2009.

But it is wrong to call COP26 a failure. Some significant progress was achieved. All countries agreed to submit transparent, equivalent and uniform climate information to improve research capabilities. Many countries signed the Global Methane Pledge to help reverse forest degradation and agreed to assist other nations in reaching ambitious climate goals.

It is up to young people to continue pressuring our leaders and make our collective voices heard. We’ve already seen what youth can achieve together. Over 100,000 young people marched in Glasgow, showing that climate change is a child rights crisis that affects every aspect of a child's life. It is a human rights crisis that disproportionately affects vulnerable communities. I urge all people to continue fighting for climate action and justice for themselves, their neighbors and the next generation.

In November 2021, people in Glasgow, Scotland took part in a Fridays for Future demonstration for climate action, led by youth climate activists and organized on the sidelines of COP26. © UNICEF/UN0547123/Elwyn-Jones

The climate crisis is a child rights crisis — an unprecedented threat to all children and young people. Learn more about what UNICEF is doing to save and protect vulnerable children from the impacts of climate change.

Join UNICEF USA in asking the U.S. Government to support youth climate action and protect children from the impacts of climate change.