Redesigning the Mongolian Ger to Help Solve a Health Crisis

A terrible air pollution problem stemming from household heating practices puts the children of Ulaanbaatar at high risk of respiratory illness. A UNICEF-led research project aims to change that.

Ulaanbaatar, Mongolia, home to half the country's children, is the coldest capital on Earth.

It also has the most toxic air on the planet — with several times the recommended daily average concentration of pollutants, five times worse than Beijing.

In the winter, when residents burn coal to survive, Ulaanbaatar, Mongolia has the most toxic air on the planet

With an estimated 42 percent of Mongolia's children suffering health effects related to air pollution, the situation has become a major public health crisis for the country. Poor access to health care for many Mongolians only compounds the problem.

"When I walk to school, the air hurts my throat.... In Ulaanbaatar, there is just smoke everywhere. "

Enkhjin, 15, lives in a ger — a traditional circular Mongolian house heated by a coal-burning stove — with her parents and siblings. "When I walk to school, the air hurts my throat," she said in a recent interview. "In Ulaanbaatar, there is just smoke everywhere." 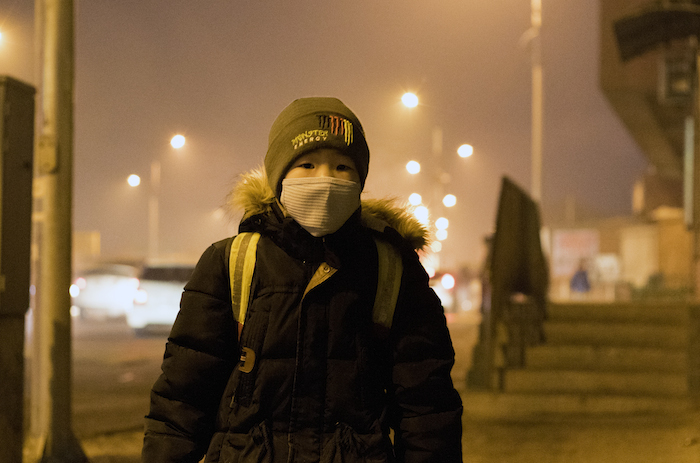 A young boy waits for the school bus in Songinokhairkhan district of Ulaanbaatar, the capital city of Mongolia, where air pollution levels are dangerously high, resulting in a public health crisis for children. ©UNICEF/UN0154526/Batbaatar

Because children tend to breathe at about twice the rate of adults, they are more vulnerable to many health hazards associated with exposure to large amounts of air toxins, including pneumonia, bronchitis and chronic respiratory conditions. Exposure at high levels puts pregnant women and their unborn babies at greater risk of low birth weight, preterm birth and stillbirth. Smog can also negatively impact a child's brain and cognitive development while still in the womb and during the early years of life.

A February 2018 report by the UNICEF Mongolia country office and Mongolia's National Center for Public Health notes that while it is important for stakeholders to invest in measures that aim to reduce air pollution, they should also be taking steps to reduce children's vulnerability to its effects. Recommendations include rolling out the pneumococcal vaccine, improving indoor air quality in public facilities that serve children and spreading the word about the proper use of, and access to, high-quality face masks.

UNICEF Innovation and partners are coming at it from another angle: designing a ger for the 21st Century.

Watch this video for a look at phase one of the project:

Today's gers are lightweight and flexible, and typically constructed out of wood, felt and canvas, with pieces tied together by knots that can be undone. Large enough to shelter a large family yet easy to pack up and move, they are part of a centuries-old tradition of life within herding and other nomadic cultures across Central Asia. The ger was never intended to serve as a permanent urban dwelling, yet that is what they have become for more than a third of the population of Ulaanbaatar, primarily those who have migrated from rural areas. Long-term housing is a relatively new concept for many in Mongolia.

The Innovation team's mission is to find ways to adapt the traditional ger so that it is better insulated and can accommodate healthier heating options, to help families save on fuel costs and reduce emissions. The goal is to incorporate new design features, new technologies and materials, while also staying true to the cultural customs around ger living.

Flexible, lightweight gers were designed for nomadic life. The challenge now is to adapt them for use as permanent structures.

"There is already a lot of tinkering going on within the gers," says Badruun Gardi, founder of GerHub, a local NGO and partner in the project. "If we can bring together these innovations that are already happening and disseminate [them] ... , that could be a very quick and low-cost way to improve things.

"The nomadic herding lifestyle that we've lived by for many hundreds of years makes Mongolians quite hardy, quite pragmatic, very agile. The number one skill that you must have as a herder is to be able to adapt to the given context and environment. So Mongolians are quite good at adapting to a given situation. We've only had a few generations of people living the sedentary lifestyle in the city, so we haven't had the opportunity to understand more about housing in this context."

A team of experts recently traveled to Ulaanbaatar to gain a better understanding of the environment and to hear firsthand what ger communities want, and need. Prototypes are now in the works, and the group — which includes representatives from UNICEF's Office of Innovation, Mongolia-based NGO GerHub, outdoor gear manufacturers Arc'Teryx and The North Face, Stanford University, the University of Pennsylvania and the architecture firm KieranTimberlake — will return in winter 2019 to install and evaluate trial solutions.

More support for this project is needed. Contact Jennie Bernstein at jbernstein@unicef.org to learn more.

To see what else is going on over at UNICEF Innovation, visit unicefstories.org