Progress in the Fight Against Neglected Tropical Diseases

Endemic in some of the poorest and most marginalized parts of the world, neglected tropical diseases prevent children from reaching their full potential. UNICEF is working with partners to keep children and communities safe and healthy.

It starts with the bite of an infected black fly, the kind that breed in fast-flowing streams and rivers, typically near remote rural villages. The fly's bite deposits the microscopic larvae of a parasitic worm, Onchocerca volvulus, in the skin. Over time, a series of these bites can cause intense itching, disfiguring skin conditions and visual impairment, including permanent blindness.

The second leading cause of preventable blindness worldwide, river blindness (onchocerciasis) is one of a group of neglected tropical diseases (NTDs) — viral, parasitic, bacterial and fungal diseases that primarily affect the world's most impoverished communities. According to the World Health Organization, NTDs affect more than 1 billion people with devastating health, social and economic consequences.

January 30, 2022 marks the 10th anniversary of the landmark London Declaration on Neglected Tropical Diseases, which unified partners across sectors, countries and disease committees to push for greater investment and action on NTDs.

Significant progress has been made in the past decade. As a key stakeholder, UNICEF has a long history of working with partners to prevent and treat NTDs like river blindness. Below, a look at some of UNICEF's efforts to wipe out NTDs and make the world a safer, healthier place for children. Community members attend a UNICEF-supported information session to learn about the prevention and treatment of river blindness in Nigeria. © UNICEF Nigeria

The best way to prevent river blindness is to avoid being bitten by black flies. Another is to proactively treat everyone in a community with Mectizan, to disrupt the life cycle of the parasite.

A UNICEF partner since 1991, the pharmaceutical company Merck & Co. donates Mectizan (originally known as ivermectin) to fight river blindness. Merck works with UNICEF and other organizations to distribute the drug free of charge to all who need it. The Mectizan Donation Program has shipped more than 4 billion 3 milligram pills to endemic countries since its inception in 1987.

I thought I and my family were under some kind of spiritual attack. I wish I had this knowledge previously, especially about the medicine called Mectizan. My child wouldn't have died.

"I thought I and my family were under some kind of spiritual attack," said Joseph Eze, after two of his children were blinded by the disease — and one died — in Nigeria's Anambra State. But after attending a community outreach session run by UNICEF-trained leaders, Eze realized his children had had an infectious disease, and there was a drug that could treat it. "I wish I had this knowledge previously, especially about the medicine called Mectizan. My child wouldn't have died." 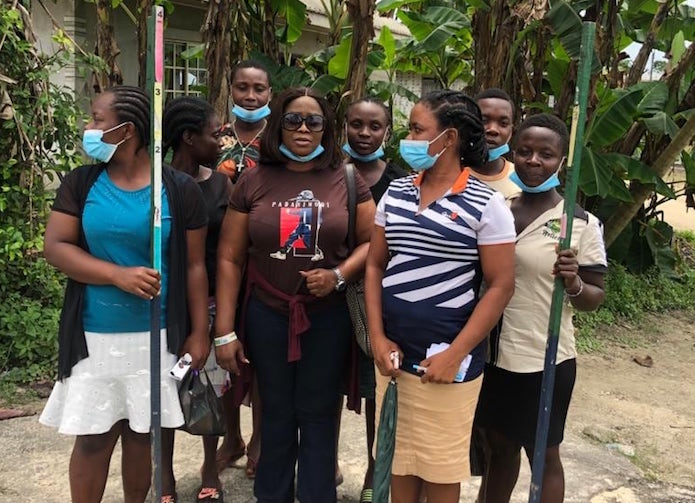 Mectizan is also used in combination with other drugs to stop the spread of lymphatic filariasis, commonly known as elephantiasis, a parasitic disease caused by microscopic, thread-like worms that, transmitted by mosquito bites, lodge in the lymph system, leading to the abnormal enlargement of body parts.

Despite the challenges of the COVID-19 pandemic, 32,533,188 people in 12 Nigerian states received treatment for river blindness and lymphatic filariasis between April 2020 and March 2021, representing a therapeutic coverage of 70 percent and geographic coverage of 92 percent. A total of 16,334 frontline health workers were trained and 109,378 community-directed distributors were trained or retrained in areas targeted for medication distribution.

After decades of successful implementation of elimination activities, several countries have been verified as river blindness-free by the World Health Organization: Colombia (2013), Ecuador (2014), Mexico (2015), and Guatemala (2016). Today, the disease remains endemic primarily in Nigeria. 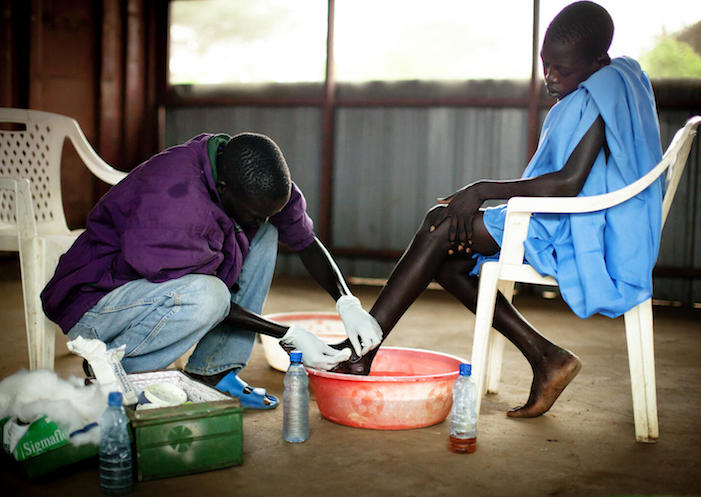 Lokodo, right, watches as a health worker begins the process of carefully removing Guinea worms from his leg in South Sudan in 2012. It can take anywhere from two days to two weeks for the worm to be completely drawn out of the body. © UNICEF/UN0385565/Anne Ackermann

Guinea worm disease is a crippling parasitic disease caused by a worm, Dracunculus medinensis. Each adult female worm carries about 3 million embryos and can measure between 23 and 31 inches in length and .07 inches in diameter.

The disease is caused by drinking water from ponds or shallow, open wells contaminated with worm larvae. The larvae grow inside the body for 10 to 14 months after a person is infected. The mature female worm emerges, usually from the feet, releasing thousands of larvae, repeating the life cycle.

UNICEF works with community health partners to detect every case within 24 hours of transmission and to treat those who have been infected by cleaning and bandaging affected areas. UNICEF also educates communities about the importance of filtering water before drinking and preventing infected people from wading in water.

During the mid-1980s, an estimated 3.5 million cases of Guinea worm disease occurred in 20 countries worldwide — 17 of those countries in Africa. By 2007, the number of cases had fallen to 10,000. Today, Guinea worm disease is on the verge of eradication: in 2020, just 27 cases were reported globally. In Yabelo, Ethiopia, a UNICEF-supported health worker washes a baby's hands as part of a monthly community-based nutrition program focusing on the first 1,000 days. Mothers receive nutritional counseling and information about the importance of hygiene, iodized salt and other health measures. Children ages 12 months to 5 years receive biannual vitamin A supplements and deworming tablets. © UNICEF/UN0141402/Sewunet

Intestinal worms, or soil-transmitted helminths — commonly known as whipworms, roundworms and hookworms — live in the intestines of infected people, producing thousands of eggs every day. The eggs leave the bodies of infected people in their feces, contaminating the soil in areas that lack adequate sanitation, particularly in warm, moist climates.

Children who walk barefoot or play in contaminated soil become infected through oral or skin contact. Heavy infections can cause a range of symptoms including abdominal pain, diarrhea, fatigue, weight loss, nausea and vomiting. A child with a "moderate" infection can have up to 200 roundworms living in their intestines. Each worm is typically between 8 and 12 inches long.

Worm infection is associated with malnutrition, poor growth and anemia in children.

"Worm infection is associated with malnutrition, poor growth and anemia in children," said UNICEF Nutrition Specialist Andreas Hasman. The worms steal nutrients and can impede children's physical and cognitive development. Children suffering from the symptoms of intestinal worms often miss school, preventing them from getting an education and reaching their full potential.

"The infection is treated with anthelminthic (deworming) medicines, and in endemic areas, it is recommended that almost all children receive periodic prophylactic treatment," said Hasman. In Ethiopia, for example, UNICEF distributes deworming tablets to young children when they receive vitamin A supplements as part of immunization campaigns and nutrition interventions on regularly scheduled Child Health Days.

These interventions have continued during the pandemic. In 2021, 7,584,290 children in Ethiopia between the ages of 12 months and 5 years — an estimated 75 percent to 80 percent of those eligible — received at least one dose of deworming tablets, maintaining coverage of 76 percent in 2020 and increasing pre-pandemic coverage of 68 percent in 2019.

Efforts to tackle neglected tropical diseases are a global success story; after decades of progress, 600 million people no longer need treatment for NTDs, and 42 countries, territories and areas have eliminated at least one disease.

But there is still a lot of work to be done before all children and their families are protected from NTDs.

Support UNICEF's work to protect communities and ensure that every child has a healthy future.

Top photo: In 1997, a girl, far right, guides her mother, who lost her sight from river blindness, past cooking utensils and debris in an alley where a neighbor sits, outside their home in Kaduna, Nigeria. They are on their way to beg in the city streets. © UNICEF/UNI33645/Pirozzi