From Polio Survivor to Frontline Vaccinator in Pakistan

Soni Faisal knows only too well how polio can forever alter a child's future. She has made it her mission to protect Pakistan's children from this highly contagious, crippling disease.

Soni Faisal was just 11 months old when she contracted polio, a highly infectious, crippling and sometimes deadly disease, but that early experience would go on to shape the rest of her life in unexpected ways. In March 2022, Faisal received Pakistan's prestigious Pride of Performance award for her outstanding work as a volunteer polio vaccinator and outreach worker.

Polio worker Soni Faisal receives the Pride of Performance Award on #PakistanDay for her tremendous efforts for #polio eradication! pic.twitter.com/JDDMB1TnIS

Faisal began her career as a frontline vaccinator in 1999. Now a mother of three children, these days she works as a social mobilizer. Her role includes dispelling people's misconceptions about the vaccine and engaging with parents about the importance of vaccinating their children.

Her work with the polio eradication program has given her life meaning and purpose, she says. "People would look at my leg and say, 'How will she work? She can't work.' But when I started working, then everyone could see, 'Yes, yes she can.' The polio program has given me so much confidence. After I started working in polio, I had the confidence of meeting new people. Meeting family, going to weddings, all of it became easier. Before that, I had no confidence to even step out of the house."

If you can save one child from polio, then you would have served the purpose of your life.

Faisal recalls how hesitant her father was when she first told him she wanted to join the program. "He was concerned that I wouldn't be able to manage because of my health, but he understood very soon that this was something that I just had to do. He told my mother, 'Let her do it.' "

When she was just starting out as a vaccinator, one of her trainers said something she will never forget: "He said, 'If you can save one child from polio, then you would have served the purpose of your life.' I knew then, this was it. This is what I had to do," she says. 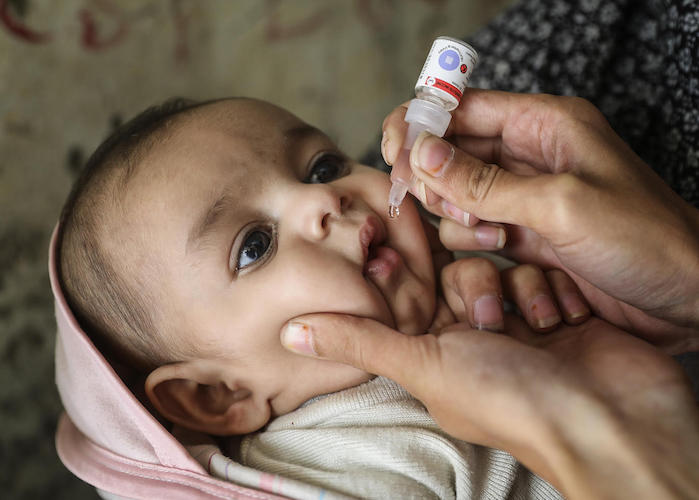 The year Faisal was diagnosed with polio, 1984, nearly 200 other children in her neighborhood of Liaquatabad in Karachi also contracted the disease. At the time, there were no door-to-door campaigns and children could only be vaccinated at health centers.

Today, Pakistan and Afghanistan are the last two countries in the world where the wild poliovirus remains endemic. In 2021, only one child was paralyzed by the virus in Pakistan and four in neighboring Afghanistan. In 2020, a total of 84 cases were reported in Pakistan and 56 in Afghanistan. This extraordinary progress is due to the tireless efforts of polio vaccination teams, community health workers and national governments, supported by generous partners like Rotary International and the Bill & Melinda Gates Foundation.

My father always lived with the regret of not vaccinating his daughter. Often parents make these decisions and it is the child who has to suffer for all of their life.

The eldest of six siblings, Faisal came from a very conservative family. Her grandmother would not let children out of the house. "In our family, all the children were born at home because the women were not allowed to leave the house, and so I was never taken to the health center for vaccination. My father always lived with the regret of not vaccinating his daughter. Often parents make these decisions and it is the child who has to suffer for all their life."

Faisal's parents tried everything they could to heal her condition in the years after her diagnosis — visiting various doctors, acupuncture specialists and anyone they could find who might be able to help. She went through an extensive operation; steel bolts were put in her legs, resulting in months of excruciating pain.

"No matter what you do, whatever you try, there is no cure for polio," she says. "I wanted to study sciences, and my teacher didn't allow me because she said, 'How will you stand in labs all day?' I would go to college and one of the women on the bus would see me and say, 'Look at her, such a beautiful girl and look what happened to her foot.' " When Soni Faisal was a baby, there were no door-to-door polio campaigns in Pakistan. Today, she works as a social mobilizer, answering parents' questions about the safety and efficacy of vaccines and encouraging them to protect their children from polio by getting them vaccinated. Her work has been as healing for her as it has been for the children she's determined to help. © Syed Mehdi Bukhari/WHO

Faisal says that when she is working on polio campaigns and some people see her, they immediately want to vaccinate their children, while others question why she is telling them to vaccinate when she herself had polio.

"To them I say, I am here because I know exactly how hard it is if you are not vaccinated."

I am here because I know exactly how hard it is if you are not vaccinated.

UNICEF and partners in the Global Polio Eradication Initiative (GPEI) — including Rotary International and the Bill & Melinda Gates Foundation — are working together to end polio in Pakistan and worldwide. As part of GPEI, UNICEF leads in vaccine supply and supports countries by working in communities to build trust in the safety and efficacy of vaccines.

This story was originally published by GPEI.