2BannerPolio.AG Nosherwan Khan with children in rural areas up in the mountains copy.jpg

When I first joined Pakistan’s PolioPlus Committee (PNPPC) as a manager close to eight years ago, polio eradication seemed within our reach. I used the opportunity to study poliomyelitis beyond just perceiving it as “a crippling disease.” I researched the causes and consequences, the types of polio virus, modes of prevention and how elusive the virus can be, given the right conditions.

Then in 2012, the dynamics of my country changed. We were faced with hostile militants, who refused to allow polio teams to vaccinate children in their territory. Our frontline workers were regularly targeted for their work during campaigns.

Children were deprived of polio vaccine in several regions occupied by the militants. Common myths and misconceptions were rife in the most backward communities. Our biggest hurdle was “How do we change their mindset?” while they eyed us with suspicion and disdain. 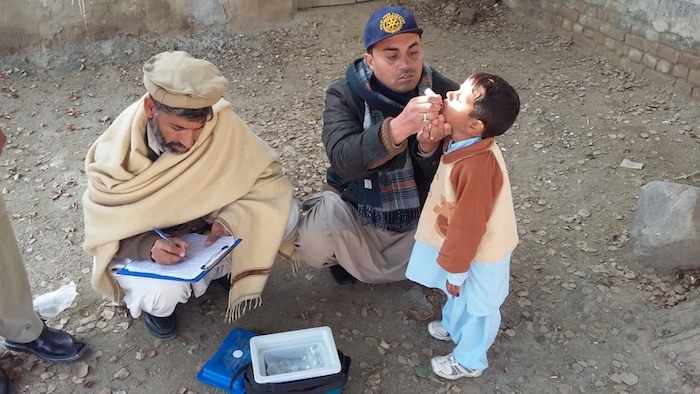 We expanded our motley crew to a larger team. Together, we worked closely with our polio partners to devise strategies and innovative approaches to overcome the odds: placing Resource Centers in high-risk districts; targeting nomads and Internally Displaced Persons (IDPs) through Permanent Transit Posts (PTPs); creating awareness in illiterate communities through talking books; conducting workshops with enlightened religious clerics; and encouraging Rotary clubs to hold health camps in impoverished districts.

Meanwhile, polio cases spiraled across the country. In 2014, we reported over 300 cases of the wild poliovirus. In the years that followed, we worked with unwavering diligence and commitment in collaboration with the government of Pakistan to restrict polio transmission. Today, we have only five cases of polio stemming from the wild virus and only 11 globally, as of the end of September.

Purple700.Bonding with the community at a Health camp in Karachi[1] copy.jpg Alina A. Visram, Manager of the Pakistan National PolioPlus Committee, with a vaccinated child at a Rotary International community health camp in Karachi.

World Polio Day 24 October was established by Rotary International to commemorate the birth of Jonas Salk, who led the first team to develop a vaccine against poliomyelitis. It marks the long and arduous journey all endemic countries have struggled against, to eradicate polio.

The last mile is the hardest, but we are so close to the finish line.

World Polio Day is October 24! The day commemorates the achievements made in polio eradication, while also looking ahead to raise awareness and funds to ensure that the world becomes polio-free. Tune into the Rotary International Facebook live stream on October 24 from 2:30 – 3:30 PM PST / 5:30 – 6:30 PM EST.

Since Rotary International and its partners launched the Global Polio Eradication Initiative, polio has plummeted from 350,000 cases a year 30 years ago to just 11 cases worldwide in 2017. Support the effort to fight polio here.

Banner photo at top: AG Nosherwan Khan and children in Pakistan's rural mountains show how close the world is to eradicating polio.