Our Impact on the Lives of Refugee Children in Greece

Latifa Woodhouse is a member of the Unitarian Universalist Congregation at Shelter Rock (UUCSR), and an advocate for refugee children. In April, Latifa was able to visit the UNICEF Greece office and site location for a newly built Blue Dot facility to see the impact of their $100,000 grant to UNICEF.

Nearly a year has passed since UNICEF was awarded a $100,000 grant from the Unitarian Universalist Congregation at Shelter Rock to support refugee families in Greece who have been trapped in the worst refugee crisis since WWII.  During the last year, children have reclaimed -in some small measure- their childhood and parents have been reassured to know their children are supported and cared for in loving and compassionate settings. In April, my husband, Colin, my daughter, Sophia and I were able to see first-hand the impact this grant has had on the lives of vulnerable children and their families. As a daughter of refugees, I would like to highlight a few special moments that touched my heart. 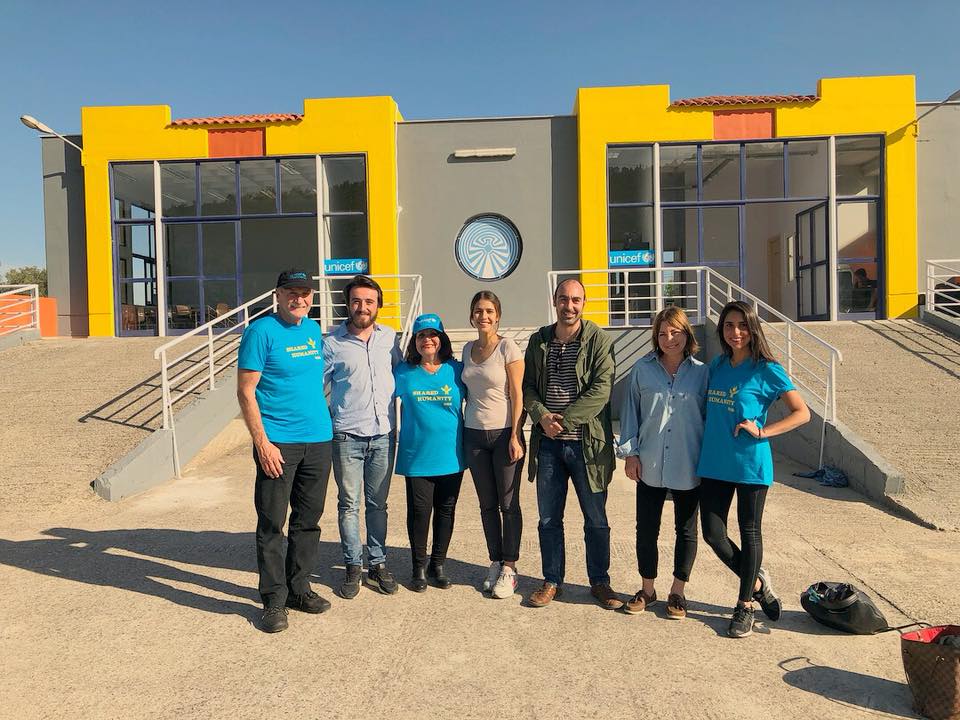 Colin, Latifa, and Sophia, as well as UNICEF Greece employees Ielina and Antonious from UNICEF Greece in front of the new Blue Dot facility in Lesvos, Greece.  The facility was completed in April 2018 as a part of UNICEF’s impact on child refugee well-being.

While sitting in UNCEF's Greece office, I learned that by the end of 2017, UNICEF met and, in many cases, exceeded nearly all planned results for its program in Greece, both in the area of child protection and education. One particular result was UNICEF's Child and Family Support Hubs (also known as Blue Dot facilities).  UNICEF built a Blue Dot facility in Lesvos to provide a safe space for children and their families and access to vital services like, education, health, protection, legal, and shelter. One of the most difficult things for families on the move is that they do not know when they will ever have a home again – a bed to rest on, access to a shower and clean facilitates, peace of mind, and a safe space to be with their families. That’s why UNICEF prioritized working with agencies to support the ongoing transfer of families from camps to apartments, hotels, and other types of accommodations. In Attica, Central Greece, Eastern and Central Macedonia regions, 8,200 children now have a more permanent place to call home and the stability and shelter to live thanks to the 22 Blue Dot facilities.

As we were already headed to Lesvos, we were able to see this facility firsthand a day after its ribbon-cutting ceremony.  As a humanitarian response during a protracted crisis, it’s essential to provide these children and women with a safe and protective environment to learn, build and recuperate after a difficult time. Many of the children in Greece have made the difficult journey to get to Greece to escape years of violence and war. They arrive traumatized, and in need of essential basic needs, including education, food, shelter, and comfort. You look in their eyes and see hope, determination and a smile on their faces, even though their stories are absolutely heartbreaking. The UNICEF Blue Dot facilities, such as this one that we saw in Lesvos, helps provide compassion and comfort so these families can rebuild.

Just this one facility helps create comfort and resources that so many refugees are lacking on their journey to find peace after fleeing brutal war and unspeakable injustice. These facilities are full of care and compassion for individuals fleeing horrible situations, and who have the desire to build a better future for their family.

Sonita, 11, and Shokria, 5, both from Afghanistan, participate in programs at an education center run by a UNICEF partner organization that provides play-based early learning for children ages 3–5; support for their parents and caregivers; and learning support in a child’s mother tongue, English, civics, peacebuilding and formal education support for children ages 6–17. ©UNICEF/UN075722/Jacome

While visiting the UNICEF office in Athens, Greece, I also learned about UNICEF's collaborative work to facilitate policy and action from humanitarian partners and the Greek government. UNICEF, with the support of Greek authorities, is addressing the specific needs of unaccompanied and separated children, namely in the areas of guardianship and accommodation. By December 2017, UNICEF had helped support the appointment of guardians to 145 children, while also supporting five Safe Zones to continue ensuring safe accommodation for children without guardians. UNICEF is also partnering with the Institute of Child Health to carry out assessments on the mental health needs and services available for unaccompanied children. Six-year-old Zetaryeh from Afghanistan attends a stencil workshop on “traveling” for refugee and migrant children, facilitated by the Kurdish artist Mhamad Nakam. Nakam is a painter, sculptor and writer born in Iraq who now lives at the refugee accommodation site near Athens, where he organizes a weekly art class for refugee and migrant children while attending a course at the Athens School of Fine Arts. © UNICEF Greece/UN070436/Loulou d’Ak

I learned about UNICEF's tireless work and unwavering commitment to provide education for refugee children. In 2017, UNICEF increased its education response in Greece to strengthen the capacity of national authorities to integrate refugee and migrant children into Greek public schools, and support children who were not enrolled in school through non-formal education opportunities. And, this impact is making positive changes!

As a teacher of 30 years in a New York City High School, I strongly believe that education in a safe environment is the key a child’s success and future. And for the first time since the start of the refugee crisis, national kindergartens have started operating in select sites in Greece, and they will continue through 2018. According to the Ministry of Education, approximately 4,700 refugee and migrant children, 5-17 years old, were enrolled in formal education at the end of 2017, representing a 34 percent increase over the previous school year.  In addition, UNICEF expanded the reach of its non-formal education programs, benefitting a total of 5,826 children in ten locations in urban Athens, three centers in urban Thessaloniki and seven open accommodation sites. Non-formal learning opportunities are offered in English, Greek, Arabic and other languages and include homework support and life skills to assist refugee and migrant children with their cultural understanding, integration and overall wellbeing. 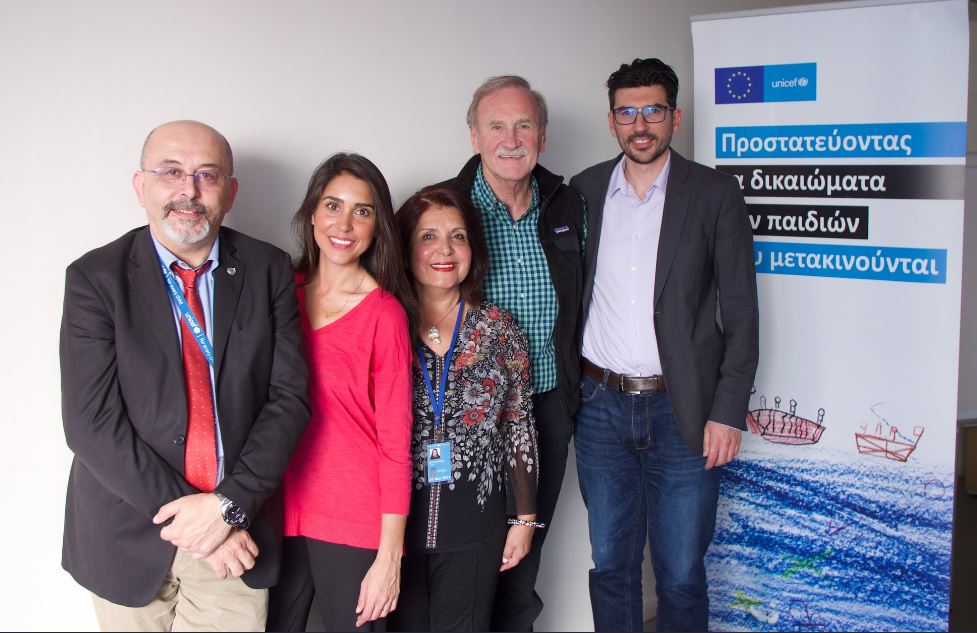 The impact we have made as a congregation on the lives of so many children and families is incredible. Seeing our $100,000 of support go to enrich lives, provide safety in tangible ways, and have clear gains on national level achievements that will protect children for generations to come showcases that with UNICEF we have helped carry that load.

What our congregation facilitated with UNICEF goes beyond today and tomorrow. We are impacting the lives of so many children and their families, and the outcome of that ripples across Greece, Europe, and the world. And, there is more to do. There are still more refugees arriving, there is a lack of proper shelter, poor protection standards, and limited reception capacity and these all remain critical issues.

As members of UUCSR Colin, Sophia and I were delighted to see such a beautiful and well equipped center was built by the Congregation’s Large Grant money. Thank you UUCSR for supporting the $100,000 grant last year. Thank you UNICEF for putting the funds to good use and supporting the livelihood of children and their families.

From the UNICEF Greece Team – Thank you for all that you have done UUCSR to help children. We look forward to sharing more with you and continuing to make a difference in the lives of refugee children and families in Greece.

Latifa Woodhouse is a member of the Unitarian Universalist Congregation at Shelter Rock (UUCSR), and an advocate for refugee children. In 2017, UUCSR gave $100,000 to support refugee children in Greece. In April, Latifa was able to visit the UNICEF Greece office and site location for a newly built Blue Dot facility that provides a safe space for children and their families on the move, as well as access vital services like, education, health, protection, legal, and shelter. Read below to hear in Latifa's own words, the impact UUCSR is having on refugee children and their families during a time when they need it most.