The UNICEF Goodwill Ambassador urges help for children living in crisis, whose educations have been interrupted.

Nearly a quarter of the world’s school-aged children — 462 million — live in countries affected by crisis. Very often, when villages are shelled, homes destroyed and families torn apart, school provides children a safe haven and some semblance of normalcy.

But for too many, this respite is denied. According to a report by the Overseas Development Institute commissioned by UNICEF and other partners, 75 million children aged 3 to 18 are in desperate need of educational support.

75 million children aged 3 to 18 are in desperate need of educational support.

Yet on average, only two percent of global humanitarian appeals are dedicated to education.

UNICEF Goodwill Ambassador Orlando Bloom has something to say about this. He traveled to Ukraine to visit kids who have been forced from school because of violence and conflict.

“I met children like 11-year-old Liana, who hid in the basement of her school for almost two weeks, in freezing conditions, without lighting or heat, while shelling devastated the classrooms above,” said Mr. Bloom. “Now, after surviving some of the most terrifying experiences life could possibly throw at them, all they want is to get back to the safety and routine of school and plan for their futures.”

During the first World Humanitarian Summit in Istanbul, held May 23-24, a new fund was introduced to help solve this problem. Education Cannot Wait aims to raise nearly $4 billion to provide 13.6 million children with access to education in emergencies within five years, and plans to reach 75 million children by 2030.

Going to school keeps children safe from abuses like trafficking and recruitment into armed groups.

“Education changes lives in emergencies,” said Josephine Bourne, UNICEF’s Global Chief of Education. “Going to school keeps children safe from abuses like trafficking and recruitment into armed groups and is a vital investment in children’s futures and in the future of their communities. It is time education is prioritized by the international community as an essential part of basic humanitarian response, alongside water, food and shelter.”

Orlando Bloom couldn't agree more. "Children need education for a future, a sense of community, a sense of belonging." 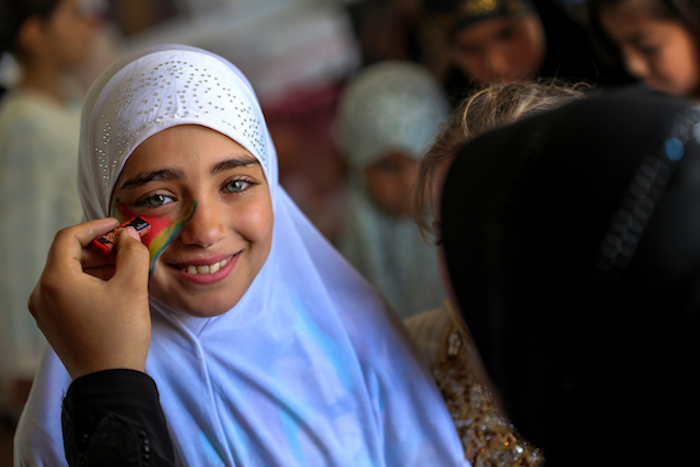 Ten-year-old Zayneb, from Mosul, attends a ceremony celebrating the opening of a UNICEF-supported child-friendly space at a camp for displaced Iraqis in Karbala.