Madhulika Shastry, a Girl Scout from Orange County, focused her Gold Award project on educating her peers about human trafficking and mobilizing them to take action. In this blog, Madhulika shares her experience and how it impacted her community.

I've learned about human trafficking in little spurts throughout my high school career.

We wouldn't have in-depth discussions about it, but it would be mentioned in conversations about sexual assault or when we learned about the Universal Declaration of Human Rights. Much of what I knew about trafficking came from watching YouTube videos or reading statements and articles in my free time. I never saw trafficking as an issue that directly affected my city, or even the United States, because I grew up with this idealized vision of our country. My home city, Irvine, was rated FBI’s safest city for several years, so there weren’t many thoughts on crime or violence.

However, after doing some research, I learned how prevalent human trafficking is, not only in the world, but also in my own county. I was shocked to learn that there are at least 200 cases annually in Orange County, where I live. But 200 cases is such a small number - there are about 20 to 30 million people who have been trafficked globally today.

This sparked my interest. I decided to do my Girl Scout Gold Award project on raising awareness about human trafficking. This award is the highest achievement for Girl Scouting, and demands for Girl Scouts to research national or global situations and make sure our efforts are sustainable.

I wanted to educate our community on what trafficking is, share true stories and statistics, and present how we can end trafficking.

I decided to start by hosting a week-long series of events, each day focusing on a different aspect on trafficking. In August, I contacted the End Trafficking project at UNICEF USA and learned how to engage students through different activities. I collaborated with my school’s Break The Silence club, who helped host the events with me. After submitting all the necessary documents and getting approval, I began to formally organize the events. Tuesday, February 21st was the first event. I conducted a Lemonade stand during lunchtime, which was open to the whole school. I advertised about giving out free lemonade, and had the activities director make an announcement on the loudspeaker. However, when the students came over, they were given a cup of water. The water was used to symbolize how traffickers lure their victims through false promises, like security or a better life. After educating the students about how victims of trafficking are often tricked, I did give them lemonade as a sign of gratitude. I was pleasantly surprised with the great turnout and at how many students were interested in learning about trafficking. Yet, there was a bigger audience on Thursday, February 23rd. On Thursday, I handed out samples certified Fair Trade chocolate. I had posters and flyers about what Fair Trade is, why it is making a change, and which brands/items work with Fair Trade. I had examples of other Fair Trade items as well, such as tea packets. 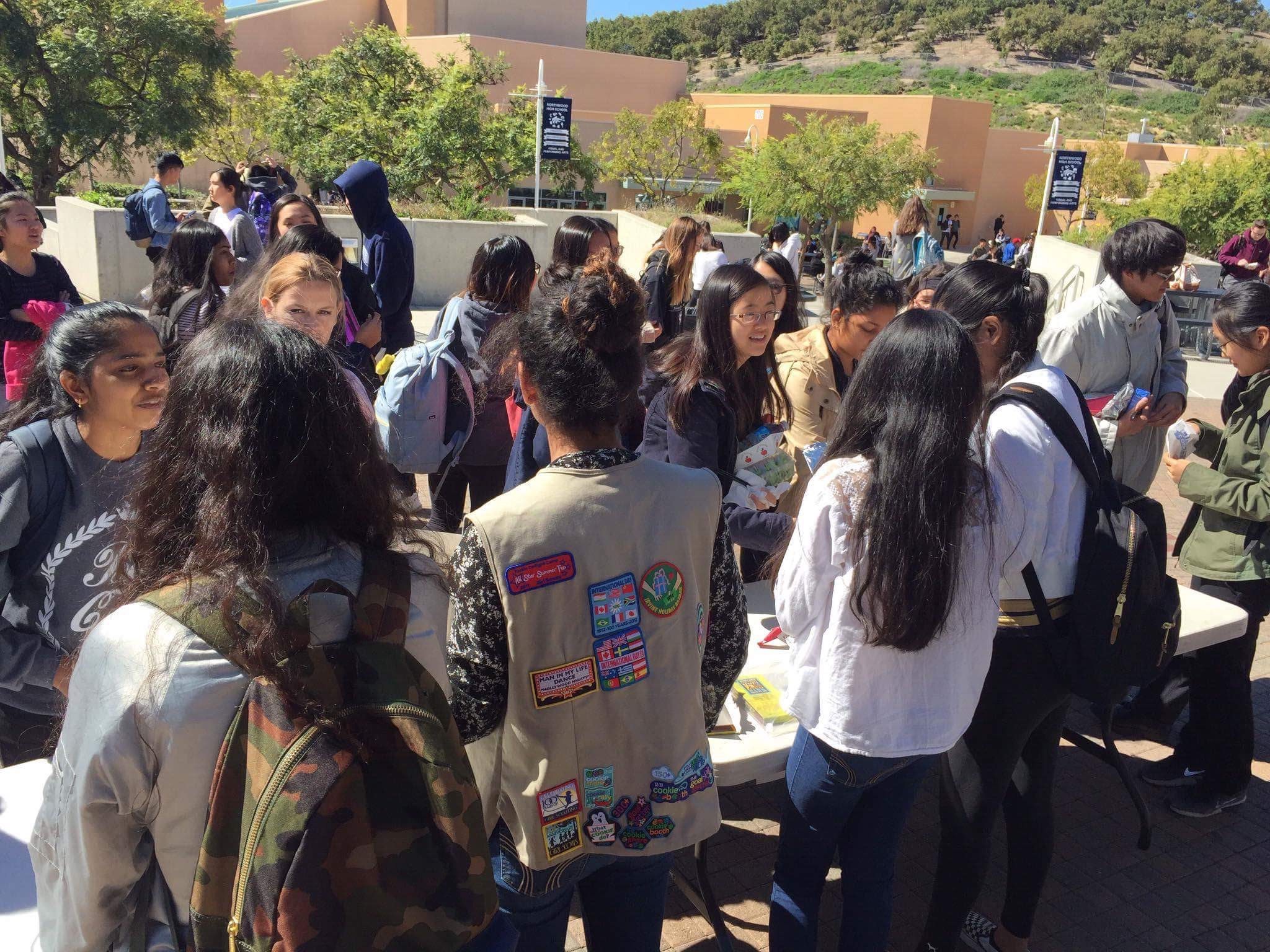 On Friday the 24th, I hosted an after school event that more intimately discussed what human trafficking is. I gave an interactive presentation on specifically how trafficking affects Orange County and other parts of the world. I then showed a thirty minute version of the documentary Not My Life. The documentary gave first-hand accounts of real trafficking stories, giving the audience a more personal impact. Afterward, I led a discussion with the audience about their thoughts from the movie.

I was so happy to see how the documentary moved my peers to wanting to speak out and make change.

We exchanged thoughts on why trafficking exists, and how, both from a political and social viewpoint, we can stop trafficking.

After the discussions, I explained more in-depth how slavery impacts all of our lives, whether we know it or not, from the items we buy to the clothes we wear. I presented a variety of topics related to trafficking that demonstrated its illegal nature. Overall, I was able to culminate the week with a strong sense of pride from our community. The following Monday, I was asked to give a presentation for the school’s Voting Involvement Association club. There, I talked about how we can make change on a political level. The club members and I made a list of items we would like to discuss if we were to write a letter to Congress. Recently, I was asked again to give another presentation at our school’s Amnesty International club. Having the opportunity to continue spreading awareness around my school really makes me happy, as the high levels of interest shown by my peers demonstrates that I am making a difference, and our community cares about battling issues like human trafficking.

Note from the author:

I am incredibly thankful for all the help and support I received from UNICEF USA, my school, and my Girl Scout troop. I hope to continue spreading awareness on human trafficking, and I plan on making this series of events an annual event.