Never Underestimate the Power of Love

In the first 1,000 days of life, neurons in a child's brain form new connections at the astonishing rate of 700 - 1,000 per second, a pace never repeated again. Children who spend those early years nurtured by loving and attentive caregivers get the best start in life.

Older children need love too. A child who is neglected, unstimulated and not protected from violence is less likely to do well in school or to grow up to earn a good living. On Valentine's Day, UNICEF salutes the power of love to help children around the world thrive and reach their full potential. In Guatemala City, Guatemala, 9-month-old Danilo gets the love he needs from his brothers, parents, relatives, neighbors and community. Dorian, 4, Denis, 13, and Dylan, 6, love to play with their baby brother, who has congenital Zika syndrome and microcephaly. "The doctors told us we shouldn't get too attached to our baby," recalls Danilo's mother, Sandra. "They said he was 'Essentially a potato — a potato that had been badly cooked. Imagine a defect at the factory: Your baby is a faulty product.' "

Sandra and other determined mothers whose babies were affected by Zika set up a family support group, Aliento, to raise their children with the love, attention, stimulation and care they need, along with the same rights — to learn, to play and to develop in an inclusive environment free from discrimination — as their siblings. "The support from the other families gives me a lot of strength and means I can provide the best for all my boys, including Danilo," says Sandra. "The babies are all friends, the other children are all friends, the parents are all friends. We're now one big family, really." © UNICEF/UN0148747/Volpe Rohingya refugee Saber, 28, plays with his 18-month-old daugher Mobashera Bibi inside the shelter they share with his pregnant wife, Sadekunnahar, 26, and another daughter in Burmapara makeshift settlement, Cox's Bazar district, Bangladesh. The family was forced to flee their village in Myanmar when it was attacked by the military.

Babies and children benefit from the love and attention of both fathers and mothers. Yet a UNICEF analysis of Multiple Indicator Cluster Survey (MICS) data completed last year found that more than half of children between the ages of 3 and 4 in 74 countries — approximately 40 million children — have fathers who do not play with them, read to them or sing to them. © UNICEF/UN0155602/Sujan 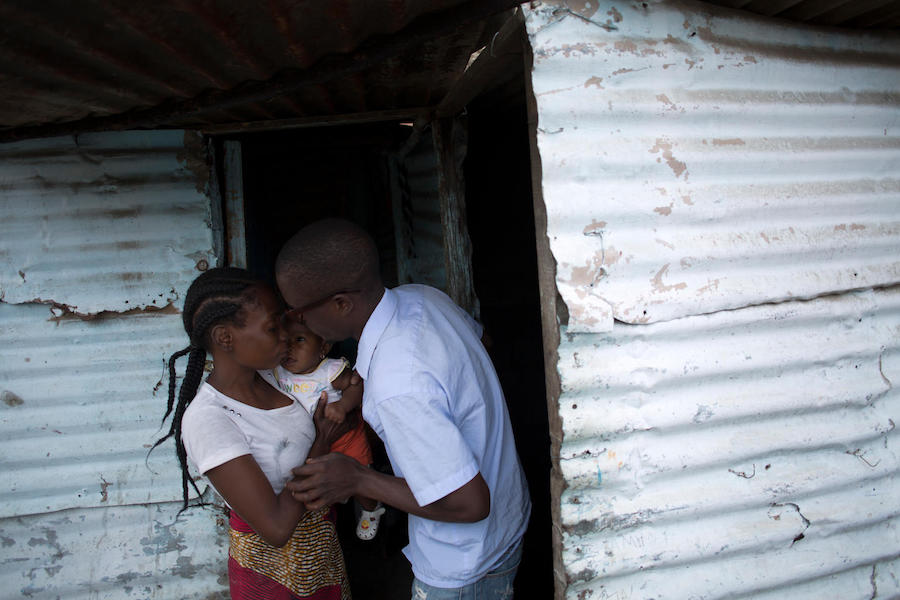 Sewage worker Einosio, 24, bids goodbye to his wife, Aida, and their 6-month-old daughter, Melucha, outside their rented one-room house in Maputo, Mozambique. "I usually wake up before seven, then I help my wife with some of the house chores. Then I go to work," says Einosio. "There is nothing that I love about this job. I have a family to provide for. That is the only thing that makes me like this work."

"We must break down the barriers that prevent fathers from providing their babies and young children a conducive environment for them to thrive, including love, play, protection and nutritious food," says Laurence Chandy, UNICEF Director of Data, Research and Policy. "We must ensure that all parents have the time, resources and knowledge they need to fully support their children's early development." © UNICEF/UN0139458/Prinsloo 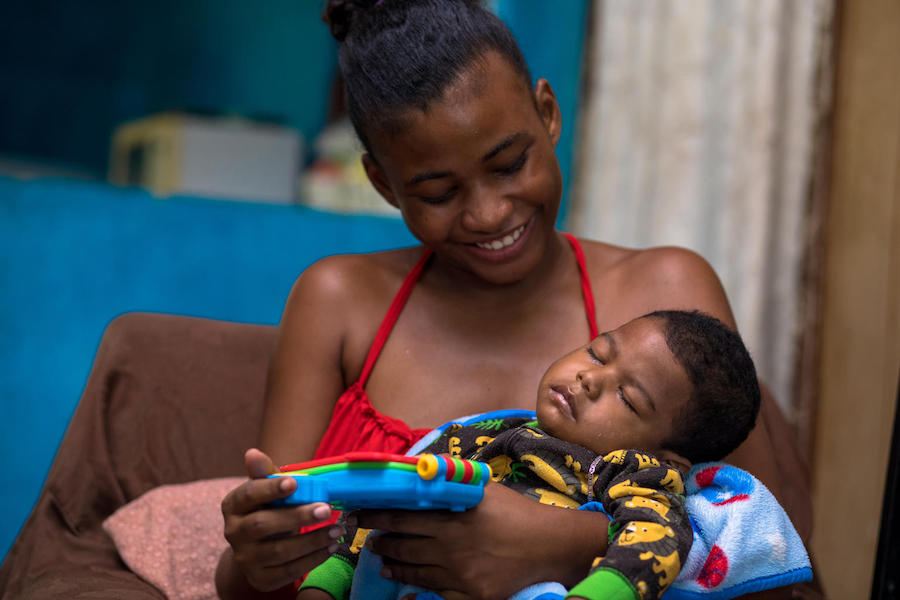 Ashley, 19, is a single mother who lives with her grandmother and sisters in a wooden house in Belize City, Belize. Her 18-month-old son Jaycean was 6 months old when he had a fit followed by a high fever, and then lost his eyesight. Doctors diagnosed him with cerebral palsy.  "People used to stare, especially when he first got sick and had no hair," says Ashley. "It used to make me cry, but now I don't let it bother me."

"The doctors told me it was bad. They told me he didn't look like he was improving, but now he smiles, he cuddles. I thought he'd never be able to show his emotion but he does," says Ashley. At the UNICEF-supported Inspiration Center in Belize City, she learned how to stimulate Jaycean's muscles and encourage his development.

"My favorite part of the day is when he sits up, because I think if he can sit up, then maybe he'll be able to crawl. And if he can crawl, perhaps one day he can walk. He's learning loads. He loves to be close. He loves to look at me. I want to be able to go back to school so I can get a good education," she says. "I'd love to start my own business like one of my sisters. I'd set up day care just for children with disabilities. I wouldn't want anyone to beat him because he was crying, so that's why I'd want a special day care. I'd like to do that." © UNICEF/UN0148772/Mendez 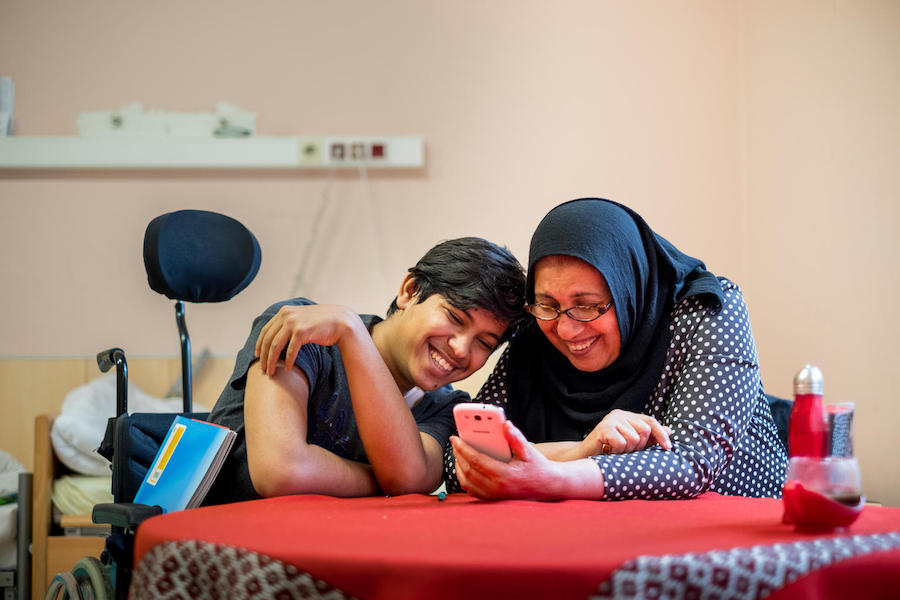 Sajad, 16, takes a break from his German homework to watch a video with his mother, Mona, 56. Mona and Sajad fled conflict in Basra, Iraq with Sajad's brother and sister in 2015. The family arrived in Vienna after a harrowing trip through the Balkans. During the boat ride from Turkey to Samos, Greece, Mona fell overboard and almost drowned.

Now the family lives in emergency refugee housing in an abandoned senior citizens' hospital while they wait for an interview to begin their asylum process in Austria. "The Austrian people received us with empathy, and people here have their own protected rights," says Mona. "We are strongly bonded as a family and this is what gives us hope. We will have a better life here. There is hope."

Sajad lost the use of his legs during an operation on his lower back when he was 1 month old in Iraq. "I didn't know about Europe, but now I've met so many people, and seen many things, and I'm one step closer to my dreams," he says. "My dream now its to finish school and learn very good German. I want to be with the Austrian people. I want to work as a chef, I want to travel," he adds, pausing. "I want to have a life like others." © UNICEF/UN0121009/Gilbertson VII Photo Esther, 19, was sick at home in Gwoza, Nigeria when Boko Haram militants invaded her town. "I tried to run away, but they shot at me. I fell, and so they took me with some girls and small children. We were all locked in a room, us girls. The Emir came in, the same guy that had the Chibok girls. I started screaming as he wanted to take me away. They wanted to sell me to one of their leaders."

Raped repeatedly by a Boko Haram fighter, she soon became pregnant. During a firefight, she escaped and later gave birth to Becky, now 6 months old. "Becky is troublesome," Esther says. "She cries a lot. When she does, people say she is troublesome like her father, like Boko Haram. I like to play with her. I hope she will become a medical doctor, but she needs to go to school. She is always sick. I struggle to get medicine for her." © UNICEF/UN0118456/Sokhin

Help support UNICEF's innovative early childhood development initiatives and other UNICEF programs that save children's lives and build their futures.

Top photo: Denee, 28, leaves her 19-month-old son, Justice, at a day care center, Marilyn's Nursery, on Nevis island, St. Kitts and Nevis, while she works as a preschool teacher.  Denee says she expects the day care workers to show Justice "the same care as I give him. Like if he falls, you're there to comfort him when he cries. That's important to me. For him to feel like Mommy's still here, so that he gets the same love and attention."  © UNICEF/UN075657/Nesbitt