Nepal: One Month After the Quake

One month after two major quakes closed school, Nepal's traumatized children urgently need humanitarian aid to get back to normal.

Since her house was damaged in Nepal's April 25th earthquake, Saraswati Saru Magar, 15, has been living in a temporary shelter pieced together with what remains of the place she used to call home. But like so many children who have been struggling to survive, one of her chief concerns is over having to miss school.

In a country where 1.1 million children living in the hardest hit districts face desperation, worries over falling behind and important exams missed offer momentary distraction from the dark thoughts that preoccupy Saraswati and many others: “I am afraid of the ongoing aftershocks and constantly feel the fear of death.” 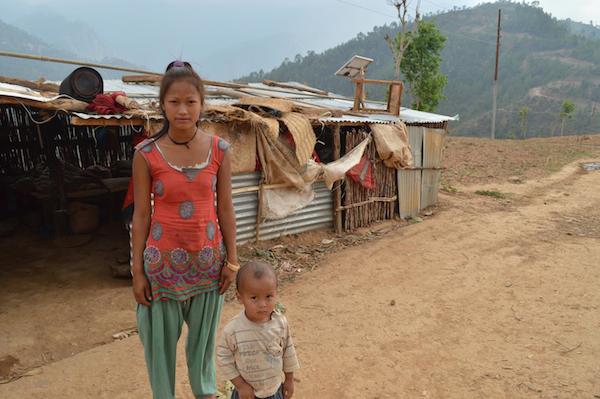 Saraswati lives in a temporary shelter built from the wreckage of her home.© UNICEF/PFPG2015-3094/Lama

One month after the two major earthquakes that devastated Nepal, one in six children urgently need humanitarian assistance - with growing numbers at risk of chronic emotional conditions. “Children here are traumatized,” says Virginia Perez, chief of child protection, UNICEF Nepal. “ They’ve gone through an enormous shock, which was repeated and repeated with every aftershock.”

The physical well-being of many is just as fragile. Roughly 15,000 children in 14 of the worst-hit districts require therapeutic foods – like nutrient-rich peanut paste – to stave off the severe acute malnutrition that plagued record numbers before the crisis began.  Another 55,000 children struggling with moderately acute malnutrition require supplementary feeding and care to get back to healthy growth and development.

A girl's mid-upper-arm circumference is measured to assess her nutrition status in Dolakha Distric, epicenter of Nepal's May 12 earthquake. © UNICEF/NYHQ2015-1349/Panday

“Before the earthquake, more than 1 in 10 children across Nepal were suffering from acute malnutrition, while close to 4 in 10 had stunted growth due to chronic under-nutrition,” said Tomoo Hozumi, UNICEF’s Representative in Nepal. Add to that challenge the quake-induced landslides that have made hardest hit areas inaccessible and just one international airport to accommodate the flow of relief supplies, and the task of getting Nepal’s children every thing they need couldn’t seem more daunting.

A Race to Offer Relief

Hozumi reports UNICEF and its partners are working “double speed to provide urgent feeding and care to children and build their resistance against diseases.” Immunizing more than 500,000 children against measles and rubella is the goal as is warding off childhood illnesses, like diarrhea, by restoring clean water to over 305,100 people and giving some 45,200 families the means to meet their basic sanitation and hygiene needs.

So far, UNICEF and its partners have already distributed $3.8 million in tents, hygiene kits, food, medical kits, and other supplies, with roughly $30 million more on the way to ensure recovery continues and strengthen children for what comes next.

Monsoon season starts in mid-June, lending urgency to a campaign to reach over 350,000 children with essential nutrition boosters, including vitamin-A supplements and deworming prophylaxis. A rise in acute respiratory infections from debris dust and long-term disabilities stemming from injuries children sustained during the earthquakes are another grave concern.

Laxmi Giri, 15, lost her home and school and worries about her upcoming exams. © UNICEF/PFPG2015-2883/Karki

But for children, like Sindhupalchok high school student Ramesh Shrestha, who must spend another night in a camp and one more day out of school, help can’t come fast enough.

“All the houses are ruined and so is my school," says Ramesh, who, since digging his school bag out of the rubble, has been trying to convince his friends to resume learning. “We’re motivating our friends to come back to school even if we have to study in open fields.”

Without education, Ramesh and the nearly 950,000 other children whose schools were damaged or destroyed worry over the course their lives may now take. “All my friends have been separated, teachers are not able to teach and we are not able to study,” says Manisha Pariyar, another student from devastated Sindhupalchok. “We had big dreams about our future, now I wonder if they will ever come true.”