My Schoolteacher Parents Taught Kids to Unleash Their Inner Heroes

Good teachers show kids they have the power to make the world a better place. For decades, UNICEF has been giving them a helping hand.

I always knew they were special. How many kids grow up thinking their parents are rock stars? Besides the children of rock stars, I mean. My parents were public-school teachers in Oak Park, Illinois, and my whole childhood was punctuated by young adults who regularly stopped my parents on the street, in the grocery store or at the gas station to say “Thank you! I learned so much in your class. I’ll never forget you.”

The best teachers have high standards and big hearts, and they can convince kids that they possess powers they don’t even know about yet. Like the power to help others, to make the world a better place. School is the first institution many kids experience, the gateway to civic engagement. A classroom is a civil society, where every member deserves respect and the group works together toward a common goal: the education and advancement of all.

The best teachers can convince kids that they possess powers they don’t even know about yet.

In school, children learn to think about the world outside their families, and the importance of giving back to those in need. Good teachers open up the world to their students, and UNICEF has long played a key role in teaching kids how they can be global citizens. For almost 70 years, American schoolchildren have been Trick-or-Treating for UNICEF, collecting small donations that make a big impact on the lives of those in need. 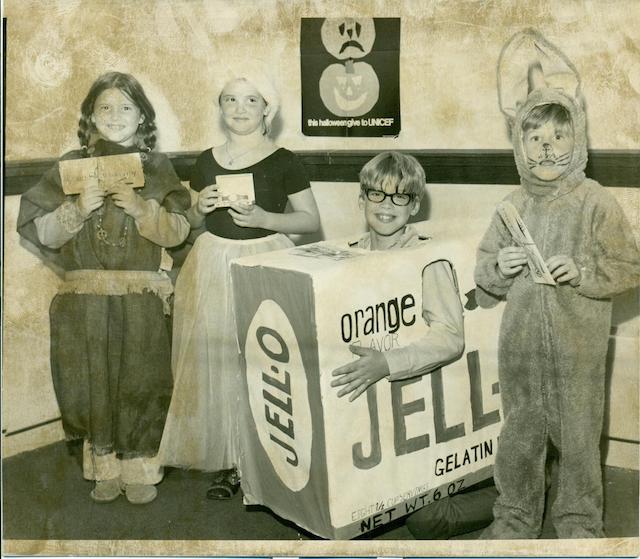 Launched in 1950, the Trick-or-Treat for UNICEF program gave school kids a way to help the world's children by collecting change on Halloween. By the 1970s, even a box of Jell-O had a social conscience.

Teachers, to their students, can be larger than life. One of the important lessons that my mom taught her fourth graders was that everyone has a contribution to make, and that by working together, people can achieve great things. She inspired them to be intellectually curious, industrious and creative.

One lesson my mom taught her fourth graders: Everyone has a contribution to make — and by working together, people can achieve great things.

No wonder some of my mother's students thought of her as more than a mere mortal. She remembers a student who came back to her classroom one evening long after the school day had ended, to retrieve a forgotten jacket. My mom was grading papers at her desk. “Mrs. Ferguson,” the boy asked reverently. “Do you live here?” 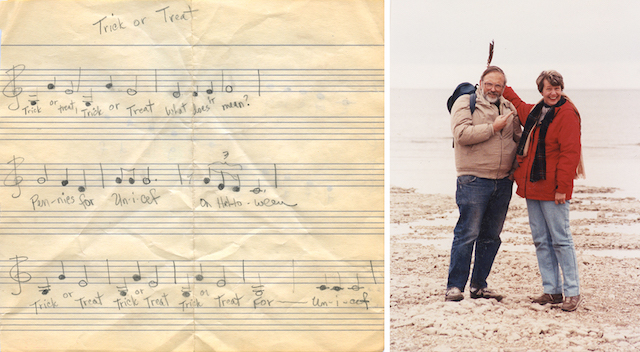 My parents, Oak Park, Illinois public-school teachers Tom and Carole Ferguson, in 1989, and my mom's handwritten copy of the "Trick-or-treat for UNICEF" song.

Well, almost. Teachers work long after their kids leave for the day, grading papers, making lesson plans. There’s a mug that says, “There are three reasons to teach: June, July and August.”

My dad taught his students that they were themselves a part of history.

But my dad, a high school history teacher, never, ever stopped working or thinking about his students. He taught summer school, and then organized our family vacations around historical sites so he could collect research materials to share with his American History classes. In high school, I got used to people knowing all about our family trips from the slides my dad showed in class, especially the ones from our six-week camping trip in Europe and the Soviet Union in 1971. He taped the Cyrillic alphabet to the car’s dashboard, and sometimes we sat for a long time at crossroads, puzzling out the road signs letter by letter. 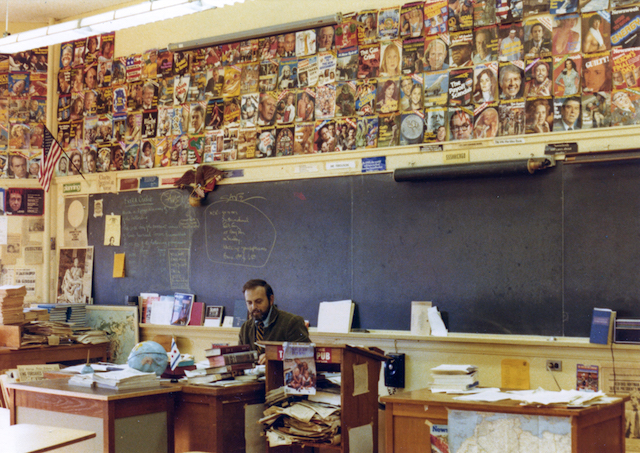 My dad, Oak Park River Forest High School history teacher Tom Ferguson, at his desk in 1979. He tried to make his lectures even more interesting than the walls of his classroom, which were filled with magazine covers and historical artifacts.

My dad taught his students that they were themselves a part of history. He assigned them block reports, where they went door-to-door interviewing their neighbors, many of them first generation, to bring home the point that America is made up of hardworking immigrants.

His students learned that they were part of a larger world, with a responsibility to help those less fortunate than themselves.

The walls of his classroom were lined with rows and rows of Newsweek magazine covers — His students were literally enveloped in current events as they sat at their desks. He made sure his students knew that they were part of a larger world, with a responsibility to fight for their freedoms and to help those less fortunate than themselves. He was sincerely interested in the kids in his class, and many stayed in touch long after they graduated. One even named his son Ferguson.

Learning how they can help makes kids global citizens for life

Following in the tradition of Trick-or-Treat for UNICEF, the UNICEF Kid Power program helps kids bring out their inner heroes. Like a good teacher, it reveals to them powers they didn't know that they possessed. Students learn that they can convert their boundless energy into nutrition for malnourished children around the world every day of the year. Today, 170,000 school children are getting active and saving lives with UNICEF Kid Power, thanks to the help of teachers nationwide.

The UNICEF Kid Power program lets kids convert their boundless energy into nutrition for malnourished children around the world.

So thank a teacher today. Because there’s a little superhero in all of us.

Teachers who are interested in bringing the Kid Power program into their classrooms can purchase the lessons and activities kit at the Teacher Store at Scholastic.com. You can also bring Kid Power to your workplace. Visit workplace.unicefkidpower.org for details.