A Mother's Love Knows No Bounds

In her work with LDS Charities and UNICEF, Sister Jean B. Bingham has traveled the globe helping mothers and strengthening families.

For Sister Jean B. Bingham, President of the Relief Society of the Church of Jesus Christ of Latter-day Saints, helping mothers and children is a lifelong passion. She has traveled far and wide — often with UNICEF — for her humanitarian work, taught English as a second language to elementary students and immigrants, worked as a nurse's aide, raised two children and welcomed many foster children and teens into her home over the years.

The common thread in all her various pursuits is her commitment to strengthening families. For Mother's Day, we asked Sister Bingham to share her thoughts on the power of a mother's love and the importance of giving back to others.

Motherhood and giving back go hand-in-hand

"Motherhood is a special relationship. It can be through adoption or foster care or lots of different family makeups, but mothers, wherever they are in the world, want to nurture their children and they want their children to have a better life experience than they've had, if their lives are difficult. All mothers share common qualities: true caring, selflessness, a desire to improve their children's lives and to give them the best opportunities that they can. "Mothers across the globe have so much in common with mothers in the United States. The physical care of their children — clothing and feeding them — is important, but so is teaching them values and protecting them from harmful influences. Every mother throughout the world has that challenge.

All parents want their children to get a good education

"Education is very important to me because literacy is the key to improving your situation in life. It also helps you to understand what else is going on in the world. In Zimbabwe, we visited a shantytown school. People didn't have anywhere to live, so they found materials and built themselves shacks. And then they said, 'Our children need an opportunity to go to school.' So they gathered whatever materials they could find and build themselves a little school out of red mud brick. We brought them books and chairs and chalkboards and magazines, materials they could use for teaching the children.

"It's critical that all children receive early childhood education. We visited early childhood learning centers where mothers were coming to learn along with their children. Those children starting early will have a better chance at life. We must continue those efforts. 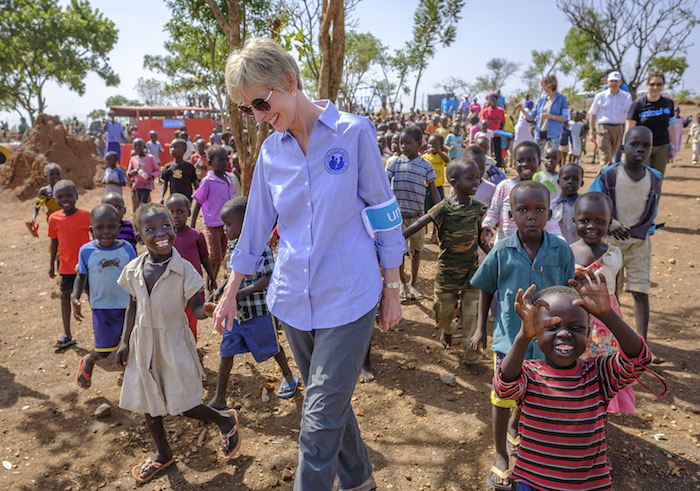 Sister Jean B. Bingham of LDS Charities gets a warm welcome from South Sudanese refugee children at a UNICEF-supported early childhood development center in the Bidi Bidi settlement, Uganda. © UNICEF/Ose

"I met so many inspiring mothers when I visited the Bidi Bidi refugee settlement in Uganda with UNICEF. I remember we were waiting to see the families from South Sudan that had come on buses from the border. One mother herded her children around her and shepherded them through the process of getting immunizations.

"Then they were each given a cup of hot porridge. She had them all sitting down on the ground, and she was making sure that each child was eating the porridge. The love on her face and the relief that her children were safe was just priceless.

Standing up for children's rights is a lifetime commitment

"I watched another young mother with two little children. The smallest child was significantly smaller, and the health workers were measuring her arm to test her for malnutrition. The way that mother cradled her little girl, you could tell that she knew there was something that this child needed and that she had not been able to provide it for her. What a relief it was for her to be able to come to a place where she could get her little girl the help she needed.

Nadira, left, and her mother, Asifa, arrived in Salt Lake City from Afghanistan in 2002. Sister Jean Bingham grew close to the family when she taught them English as a second language. © Sister Jean B. Bingham

Mothers are helping mothers all over the world, including the U.S.

"I met Asifa and her daughter Nadira in 2002. They came to Salt Lake City as refugees from Afghanistan. Asifa's husband was also alive at the time. The family was broken up. They had a son who was sent to Germany, another son who was sent to England, and two daughters who didn't get out of the country. When Asifa and Nadira arrived, the only English they knew was 'please' and 'thank you.' I worked with them, teaching them English, and over the years we became friends. Now they're naturalized citizens.

Every mother's wish is to be with her children, no matter how old they are

"Asifa's husband passed away. He was about 30 years older than his wife. He really valued education for his daughters. In Afghanistan, when the Taliban became unbearable, he would walk his daughters to school every day, and then come and pick them up so that they were not harassed or in danger.

"Now Nadira is the sole support for her mother. Asifa's sons have come from London a few times to see her, but she hasn't seen her other daughters, who live in Pakistan now, for 15 years. She pines for them, and for her six grandchildren. When I think about Mother's Day, I wish that every mother could be with her children, because that is a mother's priority, no matter how old the children get."

This Mother's Day, make your mother proud by helping UNICEF support and protect the world's most vulnerable children.

Give the Moms in your life a gift that gives back: Shop UNICEF Market's Inspired Gifts.

LDS Charities partners with UNICEF USA to support UNICEF programs around the world, including emergency response, efforts to eliminate maternal and neonatal tetanus, and education and early childhood development. LDS Charities is committed to support Learning for Life, a program providing early childhood development and education to displaced children in Uganda, Kenya, Sudan and the Democratic Republic of the Congo.