The Mother of All Summits | UNICEF USA

The Mother of All Summits

Thirty years ago, world leaders gathered at the United Nations for the Summit for Children, a landmark event for children's rights. Former UNICEF Deputy Executive Director Kul Gautam reflects on how the Summit came together and what it means for children today.

On September 29th and 30th, 1990, exactly three decades ago, UNICEF orchestrated a gathering unlike any other before it: the World Summit for Children. Just weeks after the adoption of the historic Convention on the Rights of the Child (CRC), heads of state and officials from across the globe converged on the United Nations General Assembly to address the most urgent issues affecting children. The Summit for Children would later be entered into the 1992 Guinness Book of World Records as the "largest meeting of heads of state and heads of government." That record has since been surpassed, but the resulting impact can still be felt today.

Celebrating the 30th anniversary of the World Summit for Children: a watershed moment in the history of children's rights

Though the Summit is now regarded as a signature moment in UNICEF’s history, it was initially met with skepticism when first proposed by the late UNICEF visionary Jim Grant. It took two years of meticulous planning to win support and bring the Summit to life, made possible in large part by dedicated UNICEF officials like former UNICEF Deputy Executive Director Kul Gautam. UNICEF Director of Planning and Coordination at the time, Gautam helped outline an ambitious set of objectives that would eventually pave the way for today’s Sustainable Development Goals. The Summit also played a critical role in galvanizing enthusiasm around the CRC, which has since been signed by nearly every country in the world. (The United States is the lone exception.)

Gautam recently connected with us to mark the World Summit for Children’s 30th anniversary.

Can you tell us how the Summit first came together? Why was it so important to bring all of these world leaders together in the same room?

KUL GAUTAM: To understand the impetus for the calling of the Summit, we have to go back to the 1980s. The situation in the world at that time for children was pretty bleak. Fifteen million children used to die every year, mostly because of simple preventable causes like diarrhea and vaccine-preventable diseases. Particularly in Africa and Latin America, it was considered a lost decade.

In the 1980s, 15 million children died every year, mostly from preventable causes

But on the positive side, there were a few good things happening. We had a very visionary leader at that time at UNICEF, Jim Grant. He had launched what he called a Child Survival Revolution, and there were some initial wonderful successes. Immunization rates in several countries in Latin America went up, and there were some hopeful signs. And as the Cold War ended, Grant said, "What better thing to do than to focus on children? Let us call a Summit for Children." 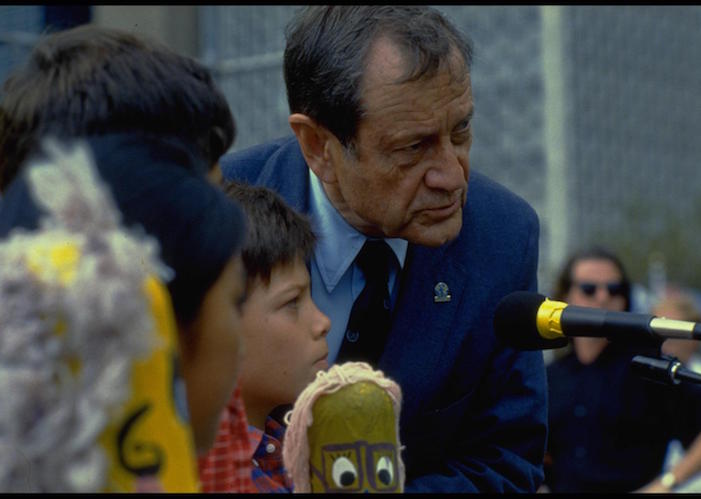 UNICEF Executive Director James Grant, together with children representing several countries, addresses the Outdoor Forum, held on the North Lawn at United Nations Headquarters on September 26, 1990 in celebration of the World Summit for Children. © UNICEF/UNI51127/Barbour

Many people kind of laughed at him: "Jim, leaders meet to discuss war and peace and trade, not little kiddies." But Jim Grant was a visionary. He said that if leaders meet to talk about these “serious” matters, they will never come to an agreement. But, when it comes to children, we can unite them. It helped that many of the solutions didn’t cost a lot of money. To provide vaccination is very cheap. Oral rehydration therapy against diarrhea, very cheap. Nutrition, breastfeeding is free. So, it requires political commitment. This is what led to the Summit.

Many of the solutions that save children's lives — vaccinations, breastfeeding — aren't expensive. They require political commitment.

You set some very ambitious goals at the outset of the Summit. How did you decide what the priorities would be?

KUL GAUTAM: We wanted to make them achievable, to make them practical. So, we got the world's best minds to work on them, including people from WHO and UNESCO. We asked ourselves what we can do to reduce child mortality, what can be done within a fixed time period and how much it would cost.

We could show that we can come up with goals that are politically popular and doable. And that is how we convinced the world leaders to come.

We did all of that homework and we could show that we can come up with goals that are politically popular and doable. And that is how we convinced the world leaders to come. In the end, we got 71 leaders, heads of their states or government, and another 100 at very senior ministerial levels and senior levels of NGOs.

Can you help set the scene? What did each day of the Summit look like?

KUL GAUTAM: The first day, on the 29th, was when we had many NGOs participating, many children, many religious leaders. It was a kind of summit of the people, as it were. And then the next morning on the 30th, that was when heads of state came together.

All 71 speakers were given five minutes to speak. Many people said, "Oh, the leaders have come all this way. How can you limit them?" It had never been done in the U.N., but that is the first time we made a rule. And guess what, everybody honored the limit. The one exception was Margaret Thatcher of the U.K. and everybody excused her, because she had done us a big favor by coming two hours before the start of the day’s events. Once she had made her formal statement, she asked for a few extra minutes to share how touched she was by the “341” film [which had debuted earlier], and everyone loved what she said.

In the short film "341," the faces of babies and young children morph into those of the world leaders they grew up to be, emphasizing the potential of every child. Too many never get to realize that potential; the title alludes to the number of young lives lost during the film's 12-minute running time.

Also among the speakers that day was President George H. W. Bush. We were not sure if he was going to make it until the very end; only a few of us knew about his surprise visit.

Czechoslovakia's Václav Havel said if he could add one more clause to the CRC, it would say: "It is forbidden for all murderers and dictators to pat children on the head."

Did you have any favorite speakers or moments? What messages really resonated with you?

KUL GAUTAM: The one person that impressed me the most was Václav Havel of Czechoslovakia, the leader of the Velvet Revolution that overthrew the country’s communist regime. He was a poet, a literary man, a wise man, who later received the Nobel Prize.

That morning, he and more than 30 other leaders signed the Convention on the Rights of the Child. As part of his beautiful speech, he said that if he could add one more clause to the Convention, it would say, "It is forbidden for all murderers and dictators to pat children on the head." Because so many dictators have done terrible things in the name of children, kissing children, being photographed with children and doing just the opposite. Children need democracy, children need freedom, and dictators should not be honored. World leaders assembled at the United Nations in 1990 to discuss the most pressing challenges facing children in their countries. © UNICEF/UNI16311/Barbour

There were similarly wonderful statements from others, like the president of Uruguay. He gave a beautiful speech at that time about limiting children’s exposure to violence, particularly on television. And then you had Colombia and El Salvador talking about how they have done this amazing thing, stopping war during Days of Tranquility to unite the people around immunizing children. In all of the speeches, you could see that children's issues and rights commanded the imagination of political leaders.

Now that we're 30 years out from the Summit, how do you feel about its legacy?

KUL GAUTAM: If we just look at what happened in that decade, those goals looking towards the year 2000, I can rattle off to you a few big achievements. Overall child deaths were reduced from 12 million a year to 9 million; about 30 million children's lives saved over the decade. We had a goal for 90% immunization coverage, and while we didn’t quite reach that everywhere, in many countries we did. With polio, we started with 350,000 cases of polio in 125 countries. By the end of the decade, we had reduced the disease by 99% and from 125 countries to 20 countries in 2000. (Today, we are now at 99.9%, and polio remains endemic in just two countries, Pakistan and Afghanistan.)

The Summit's most important outcome: Children moved high up on the world's political agenda

But the most important achievement for me was not just the concrete goals achieved, but that children became high on the political agenda of the world. Now children became most important in national development planning. When thet ime came in 2000 to set the Millennium Development Goals, most of those goals centered on children. Why? Because U.N. Secretary General Kofi Annan said that during the 90s, there were many summits, but the first one and the most important was the Children's Summit. That was the most successful, very faithfully implemented and rigorously monitored. And then, based on that, today we have the Sustainable Development Goals.

All of this was made possible by the momentum created by the 1990 Summit for Children.

Your generous contribution will help UNICEF continue to advocate for children's rights around the world.

Top photo: Along with one million others around the world, hundreds of people gathered to light candles for children at the Candlelight Vigil held on September 23, 1990 in front of United Nations Headquarters in New York, in support of the World Summit for Children. © UNICEF/UNI52715/Barbour