How UNICEF Helps Women in South Sudan Give Birth Safely

Displaced by conflict, pregnant women and children are South Sudan's most vulnerable.

He is only four hours old when we meet—born on a thin, foam single mattress in the early morning darkness of the massive Mingkaman internally displaced persons site in South Sudan.

The plastic shelter is too low to stand-up in, the mud floor is damp, and the rainy season air is thick and heavy to breathe.

Holding her baby wrapped in cloth on her lap, the mother is tired, happy and proud. Kuei is nineteen years old and this child, yet to be named, is the first for her and her husband, twenty-three year old Kang. Kuei is already breastfeeding her son, which is critical because a breastfed baby has at least a six times greater chance of survival than a non-breastfed baby.

Kuei was four months pregnant when she and her husband fled the violence and fighting around Bor, Jonglei State in mid-December 2013. They fled their village with only a few clothes, hiding and sleeping out in the open by the Nile River for weeks before finally being able to cross to the relative safety of the Mingkaman internally displaced persons site in neighbouring Lakes State. South Sudan had one of the highest maternal mortality rates in the world even before the current conflict, which has displaced more than 1.3 million people. Florence (left) – a trained midwife – checks on the baby, and his mother Kuei, shortly after the baby’s birth. © UNICEF South Sudan/2014/KentPage

Kuei and her family are among the displaced. Since arriving in Mingkaman, Kuei has been going to the UNICEF-supported Health Link maternal and primary health care clinic. “I went to the antenatal clinic yesterday," Kuei says. “I was seen by the midwife, and she told me that it was my time to give birth soon, but the waters had not broken.”

Florence, a trained mid-wife, gave Kuei a clean delivery kit, which includes items to help ensure sanitary and safe conditions for a woman in labor and for those assisting with the birth. It contains a plastic sheet, soap, a two-sided clean razor blade, cord ties and pictorial instructions on how to deliver a child.

“Then I came back home, and the labor started at night,” Kuei says. Her mother-in-law stayed with her while Kang went searching for Florence. But everything happened so fast that by the time he got back, Kuei’s mother-in-law had already helped her give birth around 4 a.m. inside her temporary shelter. The clean delivery kit had come in very handy. 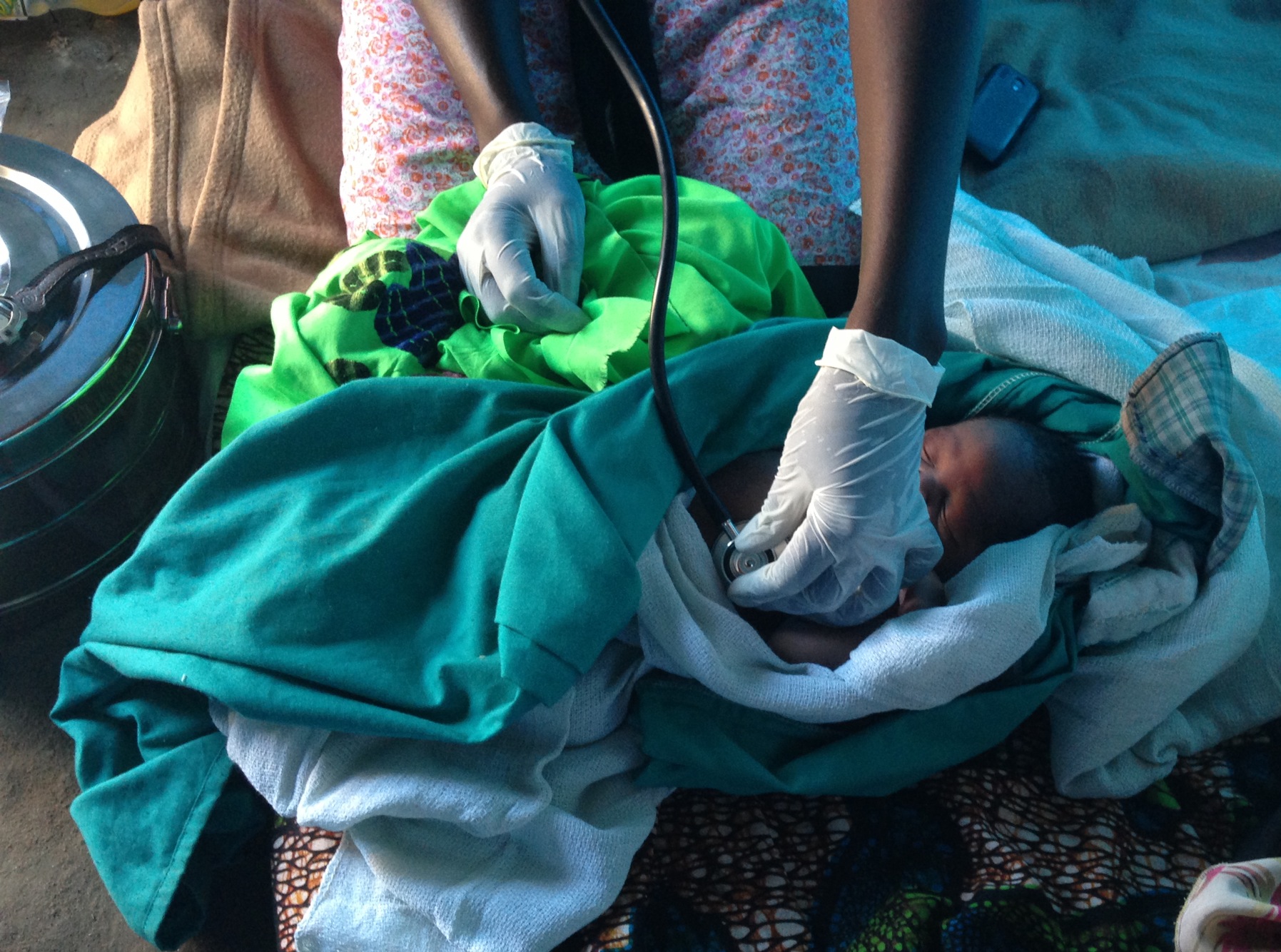 UNICEF, WHO and other partners have been working hard to support health systems in Mingkaman. © UNICEF South Sudan/2014/KentPage

Not long afterwards, Florence came from the health clinic with her medical equipment to check on the health of baby and mother. Wearing plastic gloves, Florence completed a thorough examination and found them both in good health. Florence promised to return the next morning and asked Kuei to come to the health clinic in three days for another check-up.

With a population of over 100,000 people, Mingkaman’s original health clinics were not able to cope with the massive, rapid influx of people.

“The general situation at the beginning was very bad with many mothers delivering without assistance,” explains Dr. Garang Kur Apiu, UNICEF South Sudan Health and Nutrition Specialist. “UNICEF, WHO and other partners have worked very hard to support health systems here, and we are now supporting five different health partners in Mingkaman.”

UNICEF has provided emergency reproductive health supplies to all health partners working in Mingkaman, and it is supporting community social mobilization activities and radio public service announcements so that women are aware of the importance of pre-natal care, giving birth in a health clinic and post-natal care.

Kuei’s husband is very proud to have a son, but he is also worried: “Everything went well with the delivery, but the main problem now is that here in this camp, I have no job and a woman who has given birth needs many things like proper food and clothes. Many things that I cannot provide her because of the current situation.”

He is only one day old now, but Kuei and Kang’s son is already getting all the love, and much of the help he will need to survive in the turbulence of today’s South Sudan.