Letter from Puerto Rico After the Storm

"For my generation, hurricane season was nothing more than an excuse to miss school for a couple of days. Then Hurricane Maria hit."

At home in Dorado, Puerto Rico, my family is rationing our food and water. We are sleeping on the living room floor or the backyard because of the intense heat inside the house. We are lucky to have pool water that we can use for almost everything except drinking. But our refrigerator is empty, and even one drop of cold water feels like heaven.

There is nothing like a natural disaster to change your perception of reality. Hurricane Maria was a Category 5 storm that hit Puerto Rico on Wednesday, September 20, completely devastating my island home, as well as other islands in the Caribbean. In Puerto Rico, we had not experienced a disaster such as this since 1928. Nor were we prepared for it.

Our refrigerator is empty, and even one drop of cold water feels like heaven.

I’m eighteen years old. My generation has grown up seeing hurricane season as nothing more than an excuse to miss school for a couple of days. We had an established routine. Every year when hurricane season rolled around, we bought a box of water, some batteries and a flashlight, and just sat by a radio and waited the storm out. After a few hours, we all emerged from our homes to take pictures of the damage, if there was any. Within a week, everything was back to normal.

I wish I could say that this is how it went with Hurricane Maria.

I now realize that in Puerto Rico, prior to Hurricane Maria, we had been lulled into a false sense of security. Just a week or before, we had a somewhat friendly visit from Hurricane Irma. Though our island suffered some damage to the infrastructure of our already poor power and water service systems, we were recovering fairly quickly. Within a week, we were forming small brigades of volunteers at different malls and offices to collect food, water and medicines to send to nearby islands that had not been so lucky. It was a beautiful movement, and it showed all of us here that in Puerto Rico, there is the will to help others.

I now realize that in Puerto Rico, prior to Hurricane Maria, we had been lulled into a false sense of security.

On September 18 came the notice that Hurricane Maria was approaching. Many, including my family, had previously stocked up on supplies for Irma, so our preparations were minimal. When the winds began to pick up on Tuesday, September 19, my parents and I closed our windows, secured the property in our backyard and simply went to sleep. By midnight, we started to feel the winds hitting our home. At 1 a.m., the power went out, and we moved into the living room.

None of us were able to sleep much after that. We saw objects flying by that had been pried from their homes by the wind. The wind was howling incessantly. We heard trees snap and fall, and watched as our terrace shook from the force of the winds. Our neighbor’s palm tree fell, bending their roof and breaking a wall in our house.

By six o'clock Wednesday morning, September 20, the water and Internet signal were both out. We were at the mercy of the storm until almost three o'clock on Thursday afternoon, September 21. Teenagers like me had never experienced a storm like this in our lifetimes. Looking outside my window felt like watching a movie — a horror movie in which I couldn't go to my room lest the storm monster would get me. None of it seemed real. None of it does still.

Everything after Maria has felt like a strange nightmare.

After the storm, on Friday September 22, only one radio signal could reach us in Dorado. From what we could hear, the storm had caused many floods and road obstructions. Yet with no way to communicate across the island, it was difficult to ascertain the real extent of the damage.

We left our house to try and check on our family in Bayamon. As we drove up, we saw garage doors ripped from their hinges, trees almost completely blocking the streets, electric cables on the ground. But this was all just a small portion of Maria’s devastation. 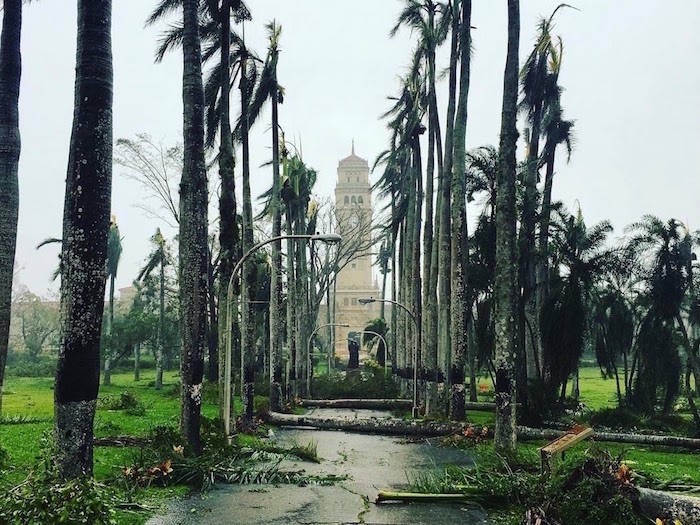 The author took a walk to check on her school after Hurricane Maria had ripped through her hometown of Dorado. © Melanie Ortiz

When we arrived at my grandmother's house, she ran to hug me. She was crying, because she had not heard from us in days, and she believed we were dead. With our entire city blacked out, not even the authorities had been able to know our status.

It was now three days since the storm had hit the island, but I had no idea if my friends were okay. My boyfriend visited, hysterical after not having been able to reach me or know the fate of my family. He hugged me, just as my grandmother had.

This is the first time I realized the true value of knowing your loved ones are safe. It left a sort of peace in my mind, and it’s this peace that has gotten me through the past few days. Even now, as I write this post, I still haven’t heard from my friends Joche, Angie and Willy, who all live in the rural and mountainous areas of Puerto Rico. There has been only silence since Tuesday, September 19 at 10 p.m. As the death tally rises and days pass without word from them, I worry about their safety, and the ache in my heart grows.

This is the first time I realized the true value of knowing your loved ones are safe. It left a sort of peace in my mind, and it’s this peace that has gotten me through the past few days.

Everywhere I go, I see lines of people waiting to get more supplies. On Monday, September 25, we were in line from 5 a.m. until 12 p.m. just to get $20 worth of gasoline in my parents’ cars so they could go work.

But I can't complain. So many others in Puerto Rico have lost everything but their lives. About 34 were even less lucky than that. We are still not sure what the death toll is; daily, as the roads are being cleared up, we learn of more victims.

I have been keenly aware of the struggles that others experience across the globe. But I never thought I would be the one needing to reach out for help.

I have dedicated significant parts of my life to helping others. I've been a UNICEF volunteer for more than three years. I founded the UNICEF Club at Dorado Academy and the University of Puerto Rico, Rio Piedras. Through our club activities, I've raised over $3,000 for children around the world, advocated in Washington D.C. for UNICEF’s funding from the U.S. Government, and educated thousands of people in my local community about UNICEF’S work. I was a UNICEF USA National Council member during my senior year in high school and represented the United States in the 2015 J7 Summit in Berlin, Germany. In all of this, I have been keenly aware of the struggles that others experience across the globe. But I never thought I would be the one needing to reach out for help. 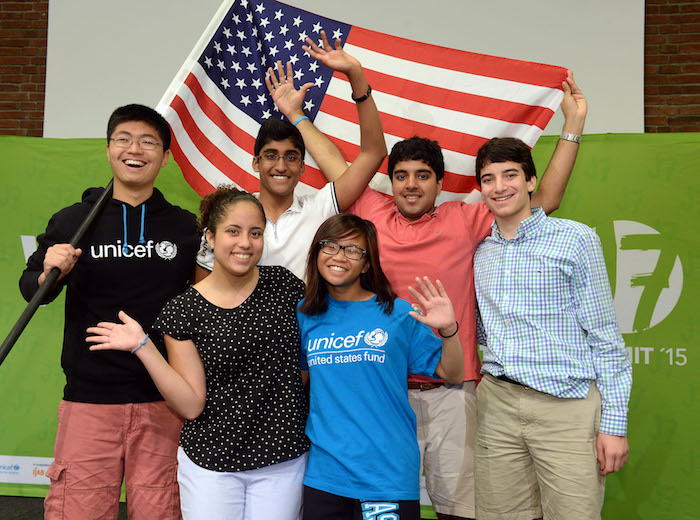 Young delegates from all the G7 countries attend the J7 Summit in Berlin in 2015, where they met and made recommendations to Federal Chancellor Angela Merkel. © David Ausserhofer

Our need in Puerto Rico right now is extraordinary. I am grateful for efforts some are making to get help to us. I just pray this help will not be too little, too late. Because I believe in the spirit and value of humanitarian assistance, I remain optimistic. As many here on the island have taken to saying recently, Puerto Rico Se Levanta. Puerto Rico Rises.

Donate now to help UNICEF reach families in crisis across the globe.