Inside Look: UNICEF Next Generation and the Power of Collective Action

UNICEF NextGen Global Principal Emily Watts explains her new role — and how a group chat on WhatsApp with counterparts around the world led to nearly $5 million in support of UNICEF's response to the war in Ukraine.

In early 2022, UNICEF Next Generation, an organization of young adult volunteer-supporters, named several of its leaders from around the world to serve as founding members of a new board of Principals. Longtime UNICEF NextGen USA volunteer Emily Watts of New York City, a clinical psychiatrist and mother of two boys ages 3 and three months, was one of nine tapped for the new role. UNICEF USA recently checked in with Watts to learn more.

What does it mean to be a UNICEF NextGen Global Principal?

EMILY WATTS: For me, it's an honor. I've been with NextGen for nearly seven years now, doing whatever I can to inspire other young professionals to become more engaged in UNICEF's mission for children around the world, to understand, support and advocate on behalf of that mission. We use innovative giving models to maximize our support, and we've raised tens of millions of dollars in support of 20-plus UNICEF projects around the world. 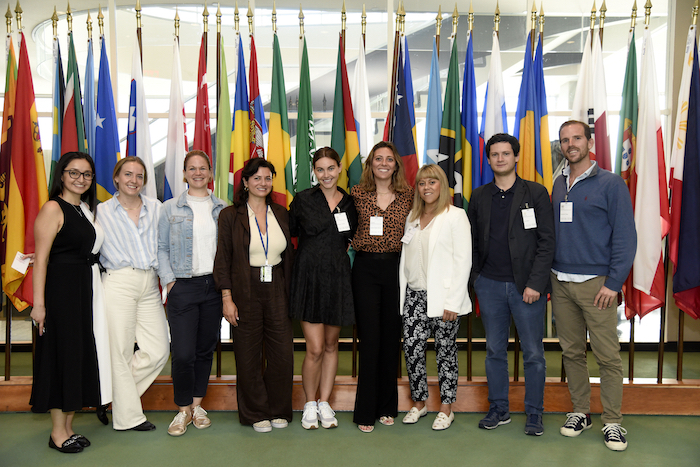 UNICEF NextGen Global Principals met up at UN Headquarters in New York City on June 14, 2022, to workshop the group's mission and strategy for the year and to learn more about UNICEF's programs in education, water and sanitation, and climate resiliency. © UNICEF

The idea behind Global Principals was to create a new fundraising incubator and thought leadership platform. Principals represent different UNICEF national committees and country offices; by working together, the hope is that we can engage and unlock new sources of support to help drive investment and innovation in UNICEF's work safeguarding child rights.

UNICEF NextGen USA has coordinated with other NextGens, national committees and UNICEF country offices before, but with this newly formed board of Principals, the collaboration, that collective action, becomes formalized in a way. We should be able to do more, more effectively, and hopefully expand our impact for children.

As a mother and a psychiatrist specializing in women’s mental health, there’s really nothing more important to me than protecting and caring for women and children.

Who are the other Principals?

EMILY WATTS: There are nine of us including myself and my co-Principal appointee Victoria Edwards from NextGen USA. The other Global Principals are Naza Alakija of Iran, Nigeria and the U.K,; Siwon Choi of South Korea; Thiago Figueiredo of Brazil and Portugal; Melissa Sesana Grajales of Colombia and the U.K.; Natasha Müller; Magnus Rausing representing both the U.K. and Sweden, and Matteo Zevi representing Italy and Switzerland. It's an amazingly dynamic group, and I'm humbled to join them all on this mission.

Child rights as a global issue area is a pretty big bucket. Will you be prioritizing specific programs?

EMILY WATTS: The plan is for us to focus on helping UNICEF address the climate crisis, mental health and inequality in digital connectivity and content. There are child rights issues within all of these areas. 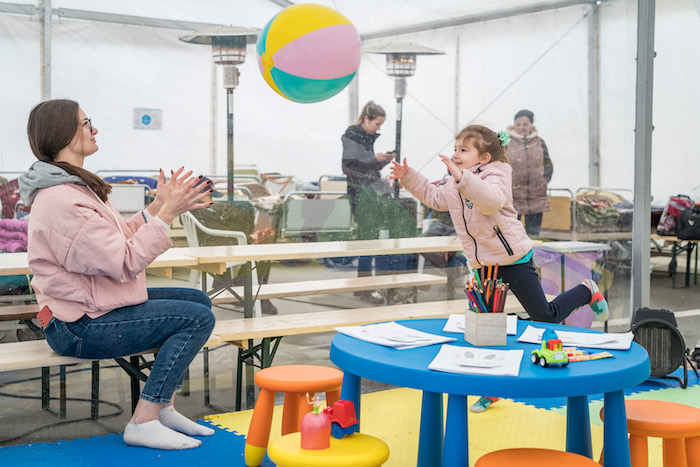 A mother and daughter from Ukraine find support at the UNICEF-UNHCR Blue Dot center in Isaccea, Romania, one of a network of service hubs set up to provide emergency support to refugees fleeing the war. UNICEF NextGen Global Principals focused on raising funds to support three Blue Dots as their first group effort. © UNICEF/UN0627871/Holerga

Your first campaign as a Global Principal focused on support for Ukrainian refugees?

EMILY WATTS: Yes. We had all tuned into UNICEF's first [virtual] emergency briefing on Ukraine, which took place shortly after conflict started escalating in the country [on Feb. 24] and UNICEF began ramping up its response. The Principals got together on WhatsApp and we decided during that group chat that we wanted to jointly fundraise for Blue Dot Centers — the service hubs for Ukrainian refugees that UNICEF had started setting up along popular transit routes, together with UNHCR and in close coordination with local authorities and other partners.

We committed to a goal of raising $450,000 for three of these centers. We produced a fundraising ask letter that accompanied a Blue Dot proposal and sent it out to our global network via email, secured speaking engagements via financial planning networks, and contacted other impact networks each of us are a part of. Principals also made personal calls. We invited potential donors to UNICEF briefings. We followed up. This is what we do.

We ended up surpassing our goal, raising $480,000 for Blue Dots to date. Principals also played a role in raising another $4.1 million from three donors — two companies and one foundation — for UNICEF’s Ukraine response overall. We looped in all the respective UNICEF offices from around the world and are excited to now have new donors in our UNICEF family. In coordinating with each other, and leveraging each other's resources and networks, we have broadened our base for future engagements.

Basically, the team decided to launch a joint campaign rather than pursue separate outreach activities in our respective countries, to pool resources and leverage each other's networks and various avenues of engagement. This is that kind of shift toward collective action that I was talking about, and that I think will help us achieve that multiplier effect that we all seek. 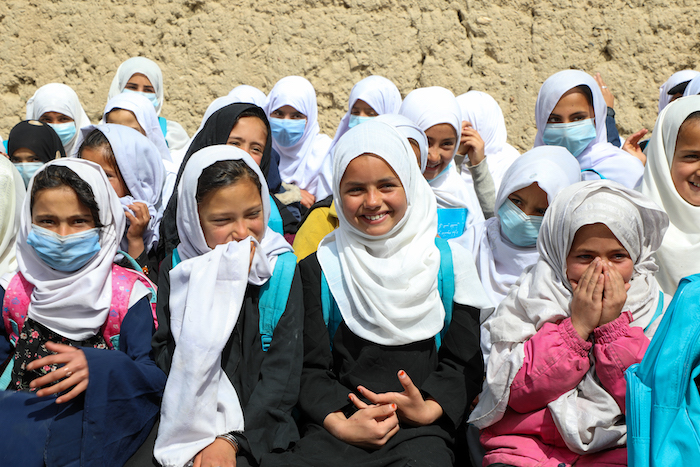 EMILY WATTS: Absolutely. I am just so grateful for our NextGen community. It's such an enthusiastic, creative and generous group. The donations and advocacy actions NextGen members take are so important in helping UNICEF continue the essential work — safeguarding children, providing critical services in health, nutrition, education, child protection, all of it. Every bit of support helps.

I want to give a special shout out to those who organize and host fundraising events — we had phenomenal turnout for UNICEF's 75th anniversary last December in all five of our regions. These are important moments, opportunities to highlight UNICEF's impact for children and to keep support for that work going.

2021 was a very successful year for NextGen USA even before the 75th anniversary.

EMILY WATTS: Yes. Many of our NextGen members have set up peer-to-peer fundraisers, bringing in their networks to support UNICEF's emergency relief efforts in a number of countries. In Afghanistan, NextGen support helped UNICEF and partners establish more community-based schools and reach more children — particularly girls — who would otherwise miss out on a quality education. 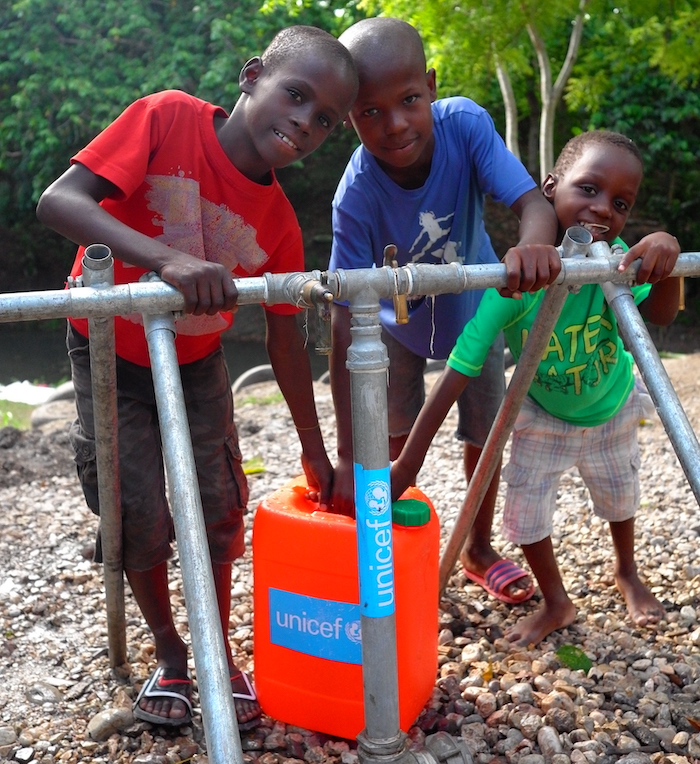 UNICEF NextGen fundraising has supported a range of UNICEF programs over the years, including efforts to improve access to safe water in Haiti. Above, children in Les Cayes, Haiti, fill a container with safe water from a UNICEF-supported system. © UNICEF/UN0522546/Ergen

In Haiti, we supported the delivery of safe water to hundreds of thousands of people in need, among other interventions. And in Lebanon we helped support UNICEF's critical work in child immunization. Last year, UNICEF reached more than 950,000 children under age 5 in Lebanon with routine vaccinations through more than 800 public health facilities, in coordination with the Ministry of Public Health.

And earlier this year, NextGen members worked together to raise over $500,000 for UNICEF's COVID-19 global relief, response, and vaccination distribution.

You've had some creative fundraising campaigns.

EMILY WATTS: True! Our Homemade initiative, for one — that was a unique collaboration between NextGen USA and NextGen UK, a virtual fundraiser series that featured cooking classes with world-class, Michelen-rated chefs. That series was a great way to raise awareness and support for UNICEF's COVID-19 response while providing those at home with fun cooking tips and tricks — all over Zoom during quarantine! Our flag fundraiser was a huge success as well.

And you seem to have a very active membership...

EMILY WATTS: Many of our NextGen members live the UNICEF mission through impact in their own communities. Like Lisle Richards, a NextGen board member and co-owner of The Village Den, a New York City restaurant that fed essential workers during the early days of the pandemic. In just three weeks, the Village Den provided 4,500 meals to several of the city’s hospitals. Sandrine Charles, another NextGen board member, is the co-founder of the Black in Fashion Council — a group advocating for diversity and inclusion in the fashion industry while holding companies accountable. And Sara Jacobs, a NextGen leader and Founding Chair of San Diego for Every Child, a coalition dedicated to ending child poverty, is the U.S. Representative for California's 53rd congressional district. Rep. Jacobs — Sara — is a phenomenal advocate for children. She gives us hope knowing we have a NextGen member who truly cares about children's rights in Congress.

EMILY WATTS: No specific theme for the year, though I will say that July 30 is World Day Against Trafficking in Persons. The buying and selling of children for the purpose of exploitation happens everywhere, including in all 50 U.S. states. Putting a stop to all forms of child trafficking is critical to UNICEF's work. So we're encouraging NextGen members to take advocacy action and join us in urging Congress to combat human trafficking.

In general, though — given that there are so many ongoing and emerging emergencies, including unseen emergencies that do not get picked up in the media — NextGen directs 50 percent of funds we raise to UNICEF's unrestricted, or CORE, funding bucket. We feel that's the best way to support UNICEF. It allows UNICEF to keep innovating and scaling solutions to meet the needs of the day, to leverage that funding when and where it is needed most.

UNICEF Next Generation is currently active in Ireland, Italy, Norway, Thailand, the U.K., the U.S. and Vietnam. NextGen members have raised over $46 million to support UNICEF’s work to date. The community has a strong legacy of campaigns and initiatives, including Cook For Syria, a restaurant fundraiser and social media campaign to raise awareness for children affected by the crisis in Syria; "Words By," a poetry book inspired by the need for change; and FOMO, an editorial project that highlights the hopes and fears of refugee children in Lebanon. 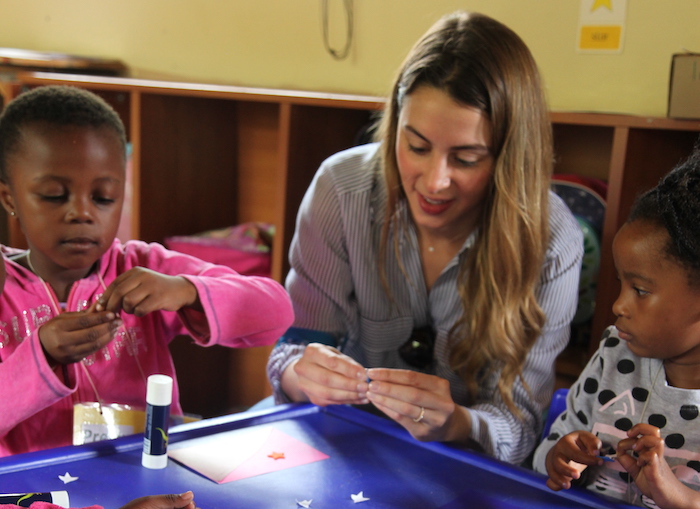 Above and top photos: Emily Watts, UNICEF Next Generation Global Principal, bonds with children she met during a 2018 UNICEF NextGen group visit to South Africa. "It was an incredible opportunity to see UNICEF's work firsthand. The scale and quality of their programs was breathtaking," Watts recalls. "Since then, I've looked for every possible way to deepen my connection to the organization." © UNICEF