An Immunization Campaign Begins in Syria Amid Violence

When it comes to vaccinating children, conflict is the single biggest obstacle. This week's attacks make reaching vulnerable Syrian children ever more urgent.

The attack on Al Quds Hospital in Aleppo, Syria, this week reminded the world just how fragile Syria’s health system is after more than five years of conflict. It also highlighted the single greatest challenge to worldwide immunization efforts today: reaching children in conflict zones.

The hospital hit was the main referral center for pediatric cases in the area. Three doctors, including one of the only remaining pediatricians in Aleppo, were killed alongside paramedics and numerous patients, among them children.

In a joint statement with WHO Director-General Margaret Chan, UNICEF Executive Director Anthony Lake expressed outrage over the escalating violence against health facilities and personnel and the devastating impact this violence has had on Syria’s ability to deliver health services to its citizens. In what Chan and Lake refer to as a “blatant violation of international humanitarian law,” families are being deprived of essential health care precisely when they need it most.

Despite the enormous challenges, UNICEF and partners continue to offer lifesaving assistance, with the recent attacks lending urgency to that effort. Just this week, UNICEF and WHO launched a nationwide campaign to immunize children in besieged areas and other hard-to-reach places against the full range of infectious diseases, including polio, measles, rubella and tetanus. They will also be screening and treating for malnutrition. This follows UNICEF and WHO's nationwide polio campaign in March that reached over 2.1 million children.

When it comes to vaccinating children, conflict remains the primary obstacle. In 2010, Syria’s immunization rates were above 90%. In the five years since, conflict has shredded public health services, leaving 57% of the population under 5 – some 2.8 million children – unprotected. Syria now has the world’s third-largest immunity gap, after South Sudan and Somalia, where 61% and 58% of children, respectively, are unvaccinated as a result of ongoing conflicts in those two countries. 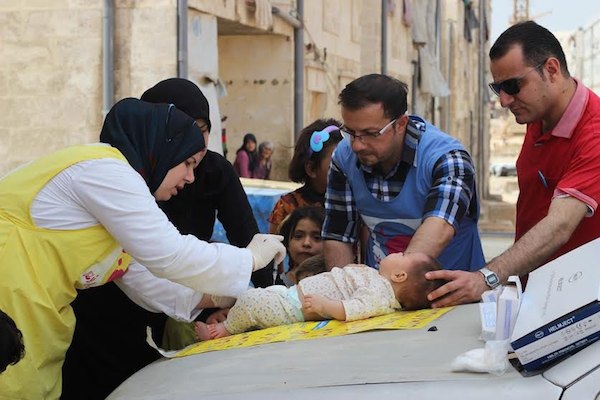