“My school has a lot of games, and I like going there,” said Akriti, 4, as she got ready to carry her satchel down the road to school.

“This is my sister,” added Akriti, introducing her twin, Sukriti.

Last year, two months after a devastating earthquake struck Nepal on April 25, 2015, Akriti wasn’t healthy enough to go to preschool — or do much else.

Fortunately, in the earthquake's aftermath, community health workers from a UNICEF-supported emergency nutrition program came to Lalitpur, where Akriti lives.  They discovered she was suffering from severe acute malnutrition.

“It feels great to hear her laughing and talking and running around,” said Kriti KC, a young health professional working with UNICEF. She remembers how quiet Akriti had been when she first met her.

“She was too weak to say anything or move around,” Kriti KC explained.

Akriti barely ate anything until UNICEF supplied her with ready-to-use therapeutic food (RUTF), a peanut-based paste that includes dried skimmed milk, vitamins and minerals.  RUTF provides just the right nutrients so a child can quickly recover from malnutrition.

After lifesaving treatment with UNICEF-supplied, ready-to-use therapeutic food, Akriti's upper arm is measured and the  circumference registers in the green region on the paper "dial," showing Akriti's health has improved. © UNICEF/Shrestha

In a few weeks, Akriti had already recovered 10 percent of her body weight.

At the early childhood development center Akriti now attends, Samjhana Lamichhane, her aunt, watches her play with other children.

“It really feels good when parents come to me for advice because now I know a lot more about nutrition.  I have to thank UNICEF for providing this information and supporting us,” she says. 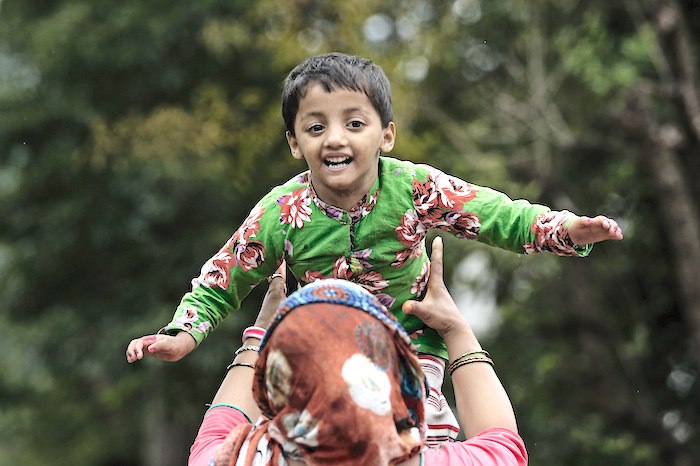 Samjhana Lamichhane playfully lifts her now healthy niece, Akriti, in the air.  Their village in Lalitpur was one of areas most severely affected by the Nepal earthquake. © UNICEF/Shrestha