How Can We Sustain the Child Survival Revolution?

The Valentine’s Day release of Bill and Melinda Gates' much anticipated annual letter comes at a dark time. The world faces the worst humanitarian crisis since World War II. Globally, more than 50 million children have fled their homes. More than half of them — 28 million — are escaping war or profound social insecurity. Almost 1 in 4 children today are living in countries suffering from conflict or natural disasters, some intensified by climate change.

Worst of all, each day, 16,000 children under the age of five die from causes we could easily prevent. But the Gates call themselves “impatient optimists.” They see real cause for hope. Why?

In Aweil, South Sudan, a UNICEF vaccinator marks the fingernails of a boy to indicate he has just been vaccinated. © UNICEF/UN034485/Olsen

There are 122 million reasons why, the Gates explain. That's how many children's lives have been saved, primarily by mass vaccination, through the efforts of UNICEF and its partners — including The Gates Foundation and Warren Buffett — since 1990.

If we've already saved 122 million children — largely through mass vaccination — we know we can save millions more in the future.

That's 122 million futures saved, too. It means millions of children have now grown up to become doctors, entrepreneurs, teachers, leaders, parents and productive members of their communities. It also means they have added substantial wealth to the economies of the countries where they live and work.

Lifesaving public health interventions like immunization can save millions of children's lives and enable them to grow up and fulfill their potential — benefiting them and their communities.

And the speed at which we are saving children’s lives keeps accelerating. “It’s one of humanity’s greatest accomplishments,” the Gates’ contend. In fact, child mortality has been dropping dramatically all over the world. From 1955 to 2015, for example, child mortality rates dropped from 43% to 12% in Mali and from 15% to 2% in Fiji.

How did this happen? Well, one very big reason is something called the “child survival revolution.” 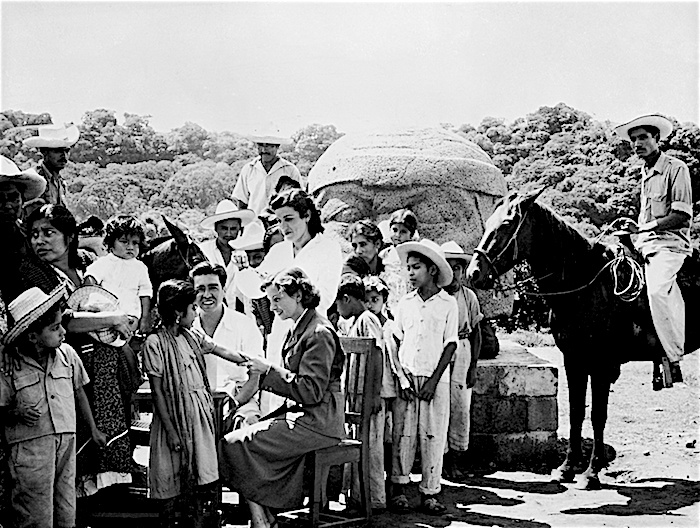 An innovative pioneer in children's health, UNICEF began mass vaccination at the dawn of modern immunization. Here, circa 1951, in Mexico, two nurses, one in an army uniform, prepare to vaccinate children as several men watch on horseback. © UNICEF/UNI43210/Unknown

“Child survival revolution” refers to an initiative led by UNICEF, from 1982 until 1995, and launched by UNICEF's charismatic and sometimes controversial Executive Director James P. Grant. Grant was fiercely outspoken in his determination to save children’s lives, no matter what the obstacles or who he had to work with to achieve this groundbreaking goal.

As Adam Fifield, a former U.S. Fund for UNICEF editorial director noted in an op-ed about Grant: “ ... he relentlessly shamed and coaxed dozens of leaders — from enlightened statesmen to brutal tyrants — into vaccinating their countries’ children.”

What did Grant’s sometimes under-appreciated revolution achieve? Experts estimate that the worldwide child vaccination rate increased from 20% in 1982 to 80% in 1990.  UNICEF helped save the lives of 25 million children, too.

On the Nam Kanh River in Laos, UNICEF-supported health teams travel by boat to remote villages that have no access to health services. To preserve their efficacy, vaccines are transported in a “cold chain” via “Arktek” coolers, an innovation recently awarded the 2016 Patents for Humanity Award, which keep vaccines cold for more than 30 days. © UNICEF/UNI14734/Holmes

In their letter, Bill and Melinda Gates make clear that their foundation and Warren Buffet have joined UNICEF and other partners in what amounts to a 21st century continuation of Grant’s child survival revolution. “For us, ‘all lives have equal value’ is not just a principle; it’s a strategy,” they explain.

For us, ‘all lives have equal value’ is not just a principle; it’s a strategy .

Their support is a lot more than verbal.  It involves game-changing, multi-year funding for many highly effective public health interventions including: poverty alleviation, family planning and contraception, malnutrition and breast-feeding, and the use of real-time data to improve services and understand why so many newborns are still dying around the world.

Perhaps a bit anxiously, two Iraqi girls — whose family had to flee their home — wait in line for vaccination, nutrition assessments and other health care at a UNICEF-supported clinic in Bzebiz Displacement Camp near Baghdad. © UNICEF/UN025421/Khuzaie

But mass immunization remains a core tactic because it works. ”Coverage for the basic package of childhood vaccines is now the highest it’s ever been, at 86 percent,” Melinda Gates explains. “Vaccines are the biggest reason for the drop in childhood deaths.”

As the federal Centers for Disease Control and Prevention also affirms, vaccines are medically safe, efficacious and effective in saving children’s lives. (Claims that vaccination causes autism, for example, are essentially a form of “fake news,” based on dangerously flawed and now thoroughly debunked “research.”)

Even better, the Gates’ letter highlights the financial efficiency of investments in child immunization. Vaccine ROI is extraordinary: “For every dollar spent on childhood immunizations, you get $44 in economic benefits,” the Gates note. That means that what we might term “vaccine ROD” (return on donation) is very high too. If you want to help save kids lives, in other words, donating to immunization programs will give you the biggest “bang for your buck.”

Immunizing all children — no matter where they live or who they are — is key to sustaining the child survival revolution.

The faith that the Gates and Warren Buffet have in the future is more than warranted, then.  We can win the fight against preventable child deaths. Real stories of progress — and the children who have been saved by vaccination  — give us hope. So does the fierce determination the Gates share with the U.S. Fund for UNICEF: That we won’t stop until “…the death of a child in the developing world is just as rare as the death of a child…” in the United States.

Isn’t that a “revolution” we can all support?

BANNER PHOTO TOP:  With support from UNICEF, the World Health Organization (WHO) and Iraq’s Ministry of Health, a health worker arrives to greet vulnerable children living in the Bzebiz Displacement Camp in Iraq. She provided vaccinations, health care and food.