Hispanic Heritage Month: Reflections on a Child’s Journey to the U.S. | UNICEF USA

Hispanic Heritage Month: Reflections on a Child’s Journey to the U.S.

Each year, Hispanic Heritage Month begins on September 15 and ends October 15 (a date range which includes Independence Day for eight Latin American countries). On the heels of this month and beyond, UNICEF USA celebrates the generations of Hispanic Americans who enrich our country and the globe. The term “Hispanic” broadly refers to Spanish-speaking individuals or those that have Spanish roots, and one subset of the group includes people from Latin America, referred to as Latinx, and specifically those from Spanish-speaking countries.

As we celebrate the accomplishments of the Hispanic community across every industry, we highlight leaders such as Rita Moreno, the first Latina and the third person ever to achieve PEGOT (winning the Peabody, Emmy, Grammy, Oscar and Tony Award) and Cesar Chavez, a primary figure for Latin American civil rights and the founder of the National Farm Workers Association.

We must also acknowledge the reality that some Latin American countries, such as El Salvador and Honduras, have some of the highest rates of violence against children in the world. Consequently, many children and families flee their homes with the hopes of finding safety and security elsewhere – often in Mexico or the United States. They are escaping the gangs, poverty and exclusion that deprives them of education and hope.

“For children on the move across the region, COVID-19 is making a bad situation even worse. Discrimination and attacks are now added to existing threats like gang violence that drove these children to leave in the first place. This means many returned children are now doubly at risk and in even greater peril than when they left their communities. It is never in a child’s best interest to be sent back to an unsafe situation.”-UNICEF Executive Director Henrietta Fore.

After arriving in Mexico or the United States, some policies can be harmful to children such as border closures that restrict access to international protection, which is a lifeline when the threat of gang retaliation and violence awaits at home. As, COVID-19 has significantly exacerbated this crisis, more than 8,800 unaccompanied children have been expelled from the United States without due process since mid-March. 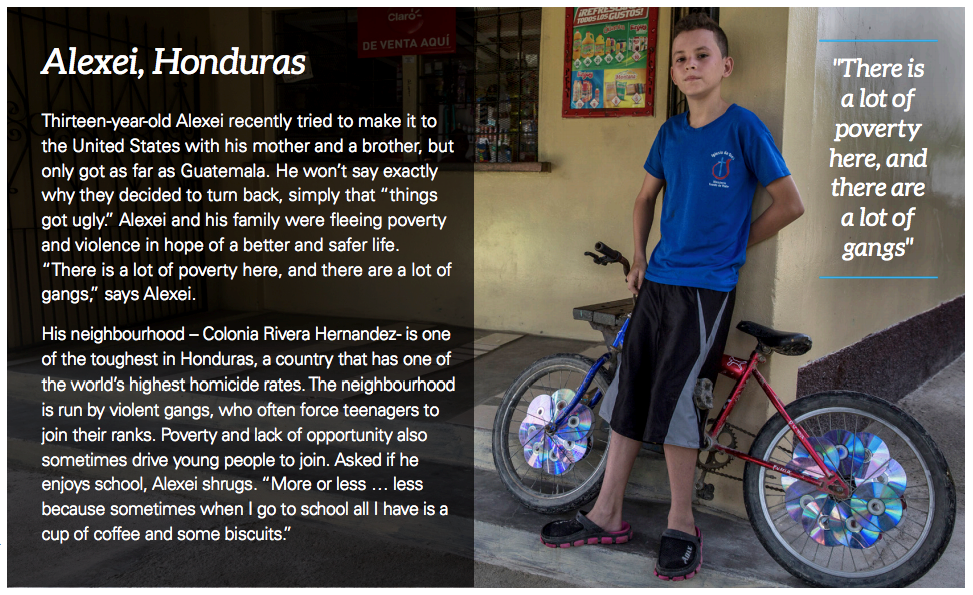 As we plan for the future and reimagine a fairer world for every child, it is important that we understand the journeys of children on the move. ©️ UNICEF/ADRIANA ZEHBRAUSKAS

“Alexei and his family were fleeing poverty and violence in hope of a better and safer life. ‘There is a lot of poverty here [in Colonia Rivera Hernandez, Honduras], and there are a lot of gangs,’ say Alexei.”

UNICEF’s programs ensure that children in origin, transit and destination countries have access to immediate and comprehensive protection, care and psychosocial support, among other interventions. UNICEF and partners are working in some of the most violent communities in the world such as in El Salvador and Honduras to protect children.

In Honduras, where there are an estimated 40,000 active gang members, UNICEF has reached more than 70,000 children and their caretakers.

However, UNICEF needs your support to continue empowering children on the move in Latin America and the United States. With your help, catalytic funding will go towards UNICEF programs that reach vulnerable children and families, doubly the impacted by COVID-19 and migration. These funds are urgently needed to create a safer, more dignified living environment for those who are stuck in violent environments.

We hope you can support UNICEF’s work to aid migrant children and families. 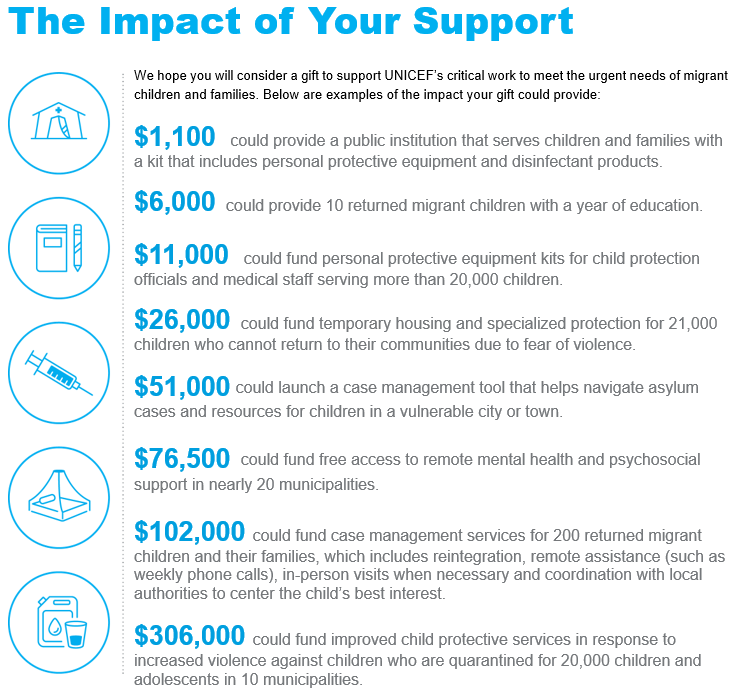 The Diaspora and Multicultural Partnerships team at UNICEF USA partners with diaspora organizations to ensure the well-being and survival of children everywhere.

During Hispanic Heritage Month we would like to highlight UNICEF’s important work, with a special emphasis on the child refugee and migrant crisis in Central America, Mexico and the United States. We also would like to share how you can take action in helping to protect vulnerable asylum-seeking children and families from the region.

If you would like to learn more about the Latinx Diaspora community in the U.S. and/or to contribute to UNICEF’s “Children on the Move in Central America, Mexico and the U.S.” program please contact:

Top Photo: A "Risk Map" warning migrants about the treacherous zones on their path to the U.S. outside of "Casa del Migrante" (“House of Migrant" in English), a shelter for migrants, deportees, and refugees in San Marcos, Guatemala. ©️ UNICEF/UN027478/Volpe