Here's How UNICEF Is Helping Children in Yemen

After more than six years of conflict, Yemen remains the world's largest humanitarian crisis. With COVID-19 continuing to spread, the country faces an emergency inside an emergency. Eighty percent of Yemen's population — 24 million people —  lives in poverty and deprivation. More than 11 million children are in dire need of humanitarian assistance.

UNICEF has been on the ground in Yemen since 2014 when civil war erupted and crisis ensued, working to save children's lives, help them recover from the impacts of violence and ongoing conflict and get back to learning and playing. 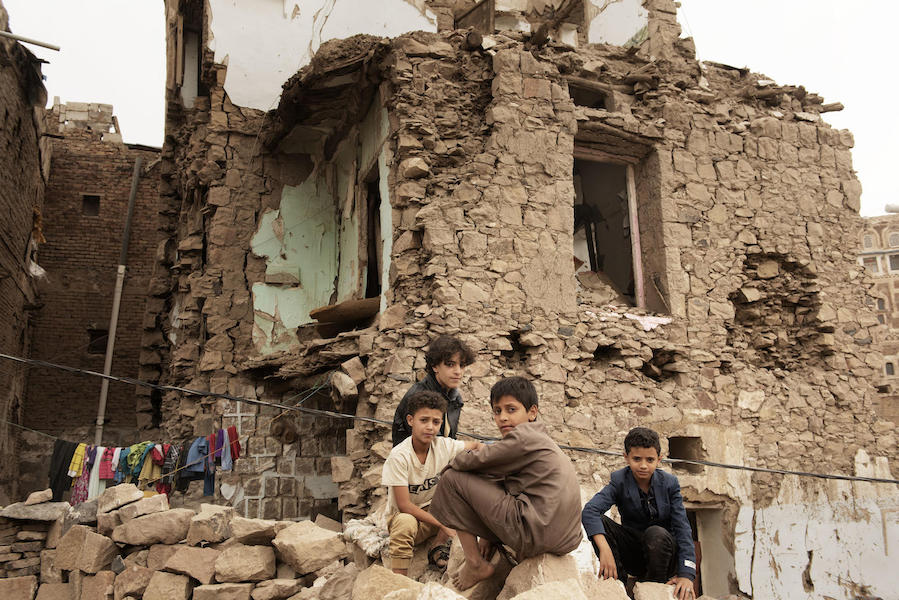 Children sit in front of a house damaged by an air strike inside the old city of Sana'a, Yemen. UNICEF works with partners to educate children about the dangers of unexploded remnants of war. © UNICEF/UNI220712/Romenzi

Yemen has long battled some of the highest malnutrition rates in the world, and those rates hit record levels in July 2020, prompting warnings that the country was on the brink of a catastrophic food security crisis. One in five children in parts of Yemen are estimated to be acutely malnourished and in urgent need of treatment. UNICEF works with partners and local health workers to screen and treat children for malnutrition, starting with the most vulnerable, and provide timely assessments, essential Ready-to-Eat Therapeutic Food (RUTF) and medical supplies. 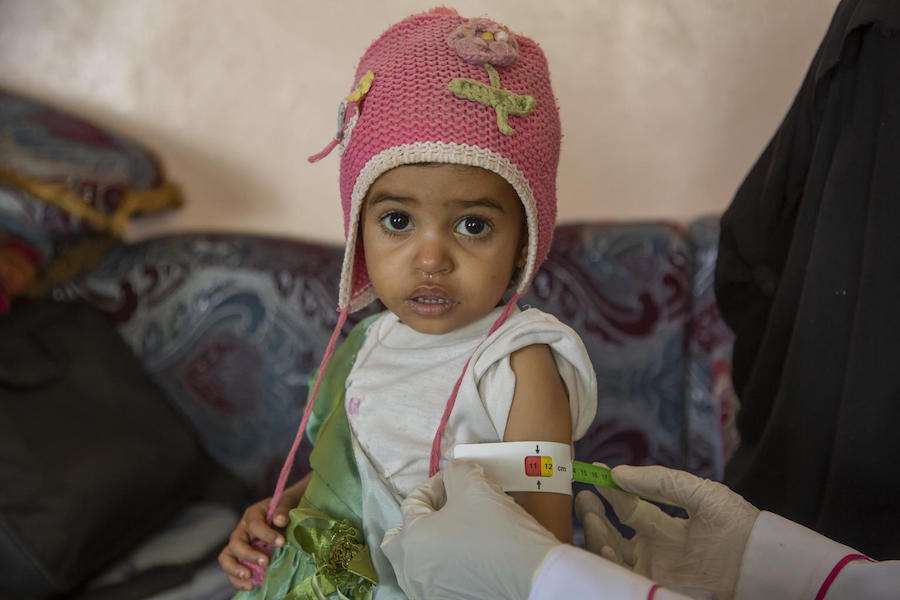 Cholera and acute watery diarrhea are a constant threat to vulnerable children in Yemen. UNICEF and partners work steadily to avoid outbreaks like the one that devastated the country in 2017, but scaling emergency water, sanitation and hygiene (WASH) assistance, building capacity of local WASH authorities, solarizing water systems and harvesting rainwater. UNICEF aims to reach 6.8 million people this year with access to safe water for drinking, cooking and personal hygiene, and 5.9 million people with critical WASH supplies and information on how better hygiene practices can help ward off disease. 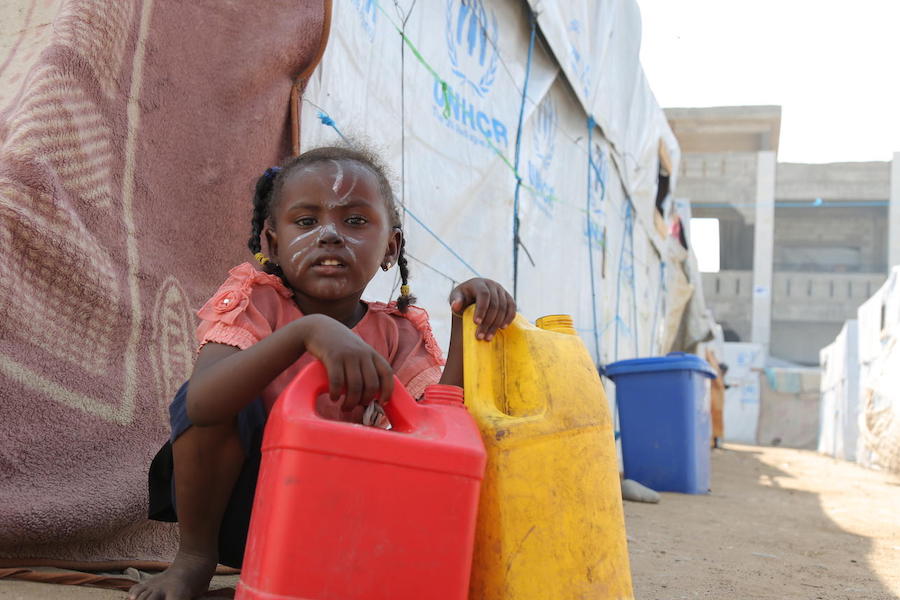 The job of fetching a family's water often falls to the daughters. Above, a girl takes a break on the way to a water point at a camp for internally displaced persons in Aden, Yemen. © UNICEF/UN0262513/Abdulhaleem

As the humanitarian situation continues to deteriorate, at least 2 million children across Yemen are out of school. UNICEF is adamant about helping these children get back to learning so they can create a better future for themselves and for their nation. With the support of partners, UNICEF is continuing to rehabilitate damaged school buildings and establishing temporary safe learning spaces where children can resume their educations. UNICEF is also providing cash incentives to teachers and school-based staff and educational supplies to keep children learning. Despite the challenges, UNICEF aims to reach 850,000 children by year's end with formal and nonformal education support, including early learning. 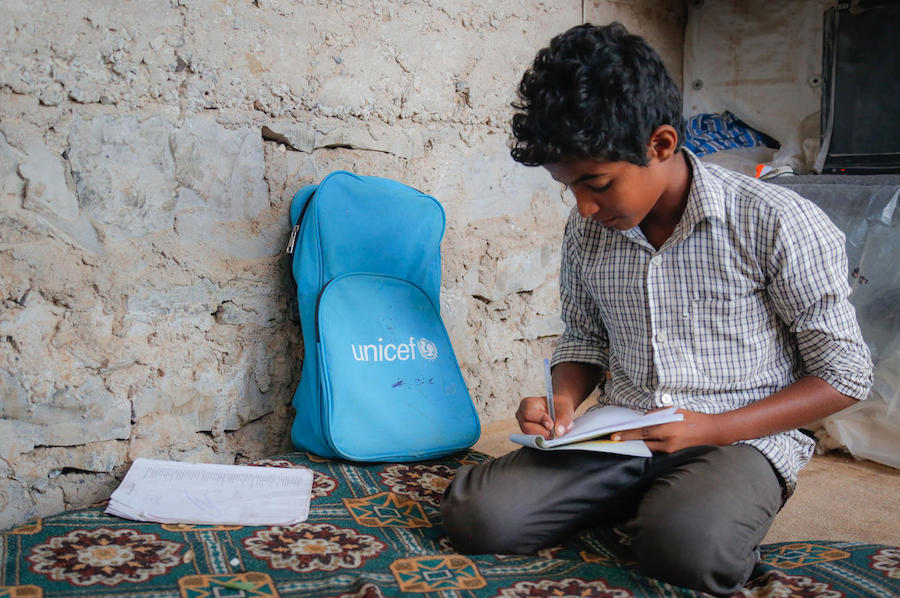 Displaced from his home in Taiz, Yemen, 12-year-old Azmi is continuing his education in Aden City, Yemen, with support from UNICEF. © UNICEF/UN0188088/Fuad

In an effort to prevent the country from economic collapse and help families struggling to survive amidst spiraling inflation, UNICEF established the Yemen Emergency Cash Transfer (ECT) program in 2017. The ECT project gives dignity and choice to financially vulnerable families so they can prioritize their most urgent purchasing needs, such as food, medicine and warm clothing for their children.

A family from Amran Governate in Yemen shares lunch. The family used money they received through the Emergency Cash Transfer project to purchase food. © UNICEF/UN0326764/

As the conflict in Yemen drags on, UNICEF continues to take every measure possible to protect the rights and safety of millions of Yemeni children. But UNICEF can't do it alone. There is an urgent need for individuals, organizations and governments to come together and take action. Every child in Yemen deserves a safe and happy childhood. Please give generously.