For 70 years, UNICEF has promoted the rights of every child to survive and thrive — no matter who they are or where they live. Our programs for child protection, gender equity, social inclusion, children with disabilities, environment and climate change and adolescent development aim to make the world safe for children to reach their full potential.

Worldwide, children face many dangers: war, sexual and gang violence, child labor, trafficking and exploitation, recruitment into armed groups and the loss of home, family, education, or opportunity due to poverty, gender, disability or ethnicity. 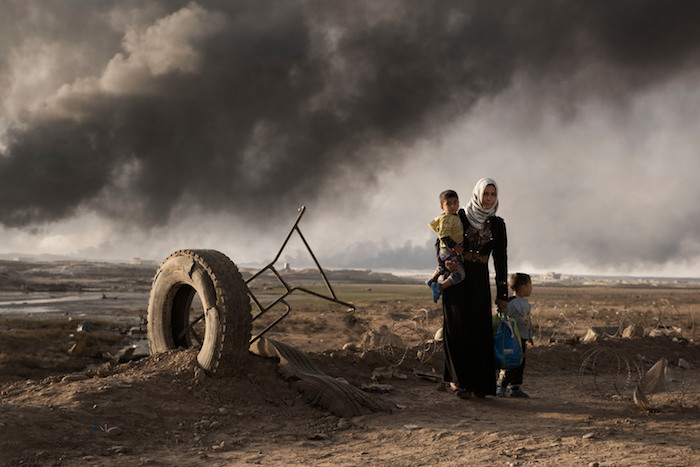 A displaced woman walks with two children south of Mosul, Iraq in 2016. © UNICEF/UN040092/Romenzi

Children need protection, not only from physical threats, but also from inequities that increase their vulnerability. Migrant and refugee children and teens trying to reach Europe — particularly those fleeing home without their parents — face appalling levels of human rights violations, for instance. In fact, 77 percent of children traveling through the Central Mediterranean report direct experiences of abuse, exploitation and human trafficking.

UNICEF works with governments and partners on the ground to prevent these abuses. UNICEF also offers psychosocial programs to help children recover from violence, exploitation and abuse.

UNICEF seeks to give children safety in many different countries in many different ways. In February 2017, for example, UNICEF announced that, globally, armed groups had released 65,000 forcibly recruited children in the last decade due to the efforts of governments, non-governmental organizations and global child advocates like UNICEF.

But fighters are still keeping tens of thousands of children captive. In northeast Nigeria, for example, children are still at risk of abduction and forcible recruitment. Given conflict and social breakdown, families often cannot protect their children from armed groups. Increasingly, girls are being used as human bombs to kill, injure and terrify the civilian population. 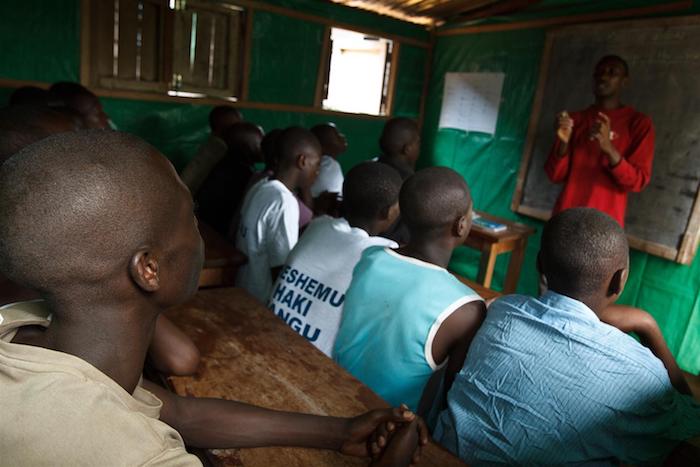 This UNICEF-supported transit and orientation center in Nigeria serves children who were kidnapped by armed groups and have been demobilized. The center provides shelter, health and psychosocial services, as well as education and tvocational skills training. © UNICEF/UNI122178/Asselin

UNICEF is helping to rebuild lives in this region and continues to work for the release of child soldiers and detainees everywhere, while helping former child soldiers reintegrate into community life.

In many countries, child marriage, genital mutilation or gender-based violence were previously legal or condoned by custom. So UNICEF works with governments, national leaders and local organizations to change laws and social norms. It may not be easy for a community to give up age-old practices, but this is a crucial step toward protecting children and preventing harm.

UNICEF also takes measures to reduce the exploitation children often face after natural or man-made disasters. UNICEF sets up child-friendly spaces to keep children safe from predators. UNICEF gives treatment, both physical and psychosocial, to those who have suffered from violence, and identifies and cares for children who are separated from their families. 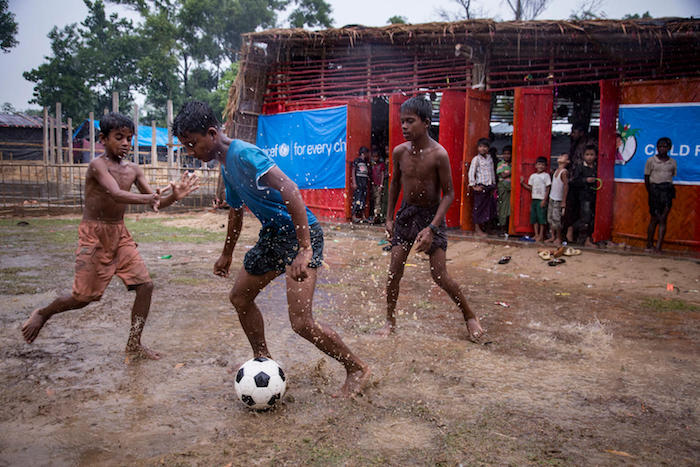 Rohingya children play in the rain outside a Child-Friendly Space in a refugee camp in Bangladesh after escaping horrific violence in neighboring Myanmar. UNICEF plans more than 1,300 new learning centers for Rohingya children in Bangladesh, enabling 200,000 children to participate. © UNICEF/UN0143106/LeMoyne

Innovation in protecting children is also a UNICEF priority. In 2017, for instance, UNICEF and partners developed a software application that makes it easier for social workers to securely collect data about — and provide services to — children caught in emergencies.

Child labor remains a serious problem worldwide. But, with UNICEF’s help, the number of children in the world engaging in work unsuitable for their age has declined by 33 percent since 2000. In the past five years alone, there has been nearly a 10 percent drop in child labor. Myanmar, for example, faces serious child labor issues. More than a million children work an average of more than 50 hours a week. Changing this practice will require a radical shift in social norms for some families and communities. UNICEF is working with Myanmar’s government to give all children access to education, reduce child labor and increase opportunities to grow and learn. 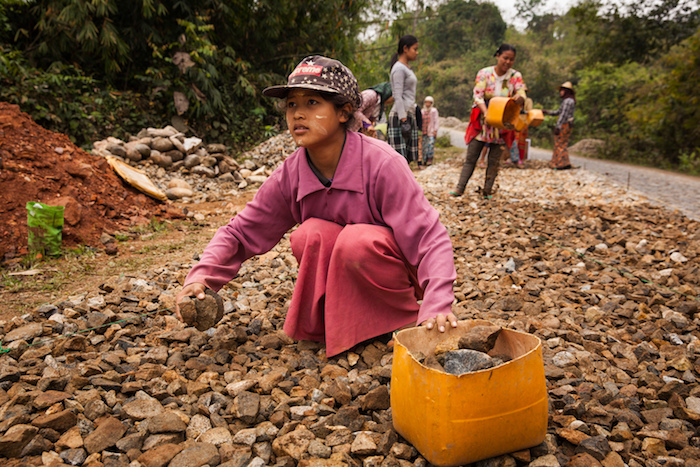 Rai, 13, works for low wages building and repairing roads in Myanmar. The country faces humanitarian crises resulting from conflict in Rakhine, Kachin and Shan states. In addition, other parts of the country face natural disasters, health emergencies and small-scale displacements. UNICEF is striving to meet the basic needs of the most vulnerable internally displaced children. © UNICEF/UN061799/Brown

One success story in India illustrates UNICEF’s approach. Divya, a 15-year-old participant in the UNICEF-supported “Child Reporters” program, saw that some children her age in her neighborhood were working rather than attending school. She assembled a team and persuaded employers and the village head that children should not work. As Divya explained, “You might think that it is impossible to end child labor in India, but I will show you how it is done.”

Since more than 10.2 million children remain in child labor in India, UNICEF seeks to inspire other teens to follow Divya’s extraordinary example.

UNICEF USA’s End Trafficking Project seeks to raise awareness of child trafficking and to mobilize Americans against it. With support from individuals and groups, the project aims to end this suffering and the tragic violation of the rights of children. The project takes several approaches, including public education and outreach, training in how to recognize child victims of trafficking and legislative advocacy. The End Trafficking Project also offers information, toolkits — including interfaith ones — event guides, school and college curriculums about child trafficking and resources in Spanish.

One American mother, Jamie Chesman, who volunteered to share her story with our End Trafficking participants, described how the trafficking of her daughter began. “She was invited to a party, and when she went, nobody was there, only this one guy who answered the door. He said she must be confused or that it was a different day, but he was about to go out for dinner — why didn’t she come and join him? He made it seem really innocent, off the cuff, and she went.” But soon he became her pimp, and she became afraid to leave him.

Chesman’s daughter’s story is not all that different from Joy’s, a girl halfway around the world in Nigeria. A child migrant, Joy was promised a job as a stylist once she arrived in Italy from Libya so that she could repay her smuggler. Instead, she was forced into prostitution to pay off an impossibly large debt. Even after her escape, she remained afraid to return to Nigeria for fear that relatives of her smuggler would find her.

As Shastry, a high school student participating in our End Trafficking project, explained, her research uncovered some disturbing realities about her own community, “I learned how prevalent human trafficking is, not only in the world, but also in my own county. I was shocked to learn that there are at least 200 cases annually in Orange County, where I live.“

After organizing a peer-education program, Shastry commented: “Having the opportunity to continue spreading awareness around my school really makes me happy, as the high levels of interest shown by my peers demonstrates that I am making a difference, and our community cares about battling issues like human trafficking.”

Top photo: Nawa sought refuge from violence in a camp in northeastern Syria. She says, “I’m worried that my children will get sick because of the cold weather and I can’t afford to take them to doctors or buy them medicine.” The harsh winter will affect millions of children, some already weakened after months without adequate food and health care. UNICEF faces a funding shortfall in its ability to provide clothes, vouchers and school heating. © UNICEF/UN046278/Souleiman