The Frontline Worker Who Helped Guide Niger to MNT Elimination

Niger celebrates a huge milestone in the global fight against an excruciating killer of mothers and newborns. This is the story of Aichatou, a health worker who helped make this victory possible.

In 2010, Kiwanis International and UNICEF joined forces to eliminate maternal and neonatal tetanus (MNT) worldwide. This historic initiative, called The Eliminate Project, is protecting the lives of babies and mothers all over the globe and aims to put an end to a cruel, centuries-old disease.

Aichatou: "I like to treat a person who is ill."

Aichatou, 40, is a community health worker in the village of Koulou Koira. The village is only 10 miles from Niger's capital, Niamey, in the green southwest corner of this vast, largely arid Sahara country. Grey and brown one-story buildings, built of stone and mud, dot the flat landscape unevenly, and a worn dirt path serves as a road. Like much of rural Niger, Koulou Koira lacks extensive health care facilities. Aichatou, in her tiny health facility, has come to serve as the hospital for the immediate area.

She seems to know everyone in every household. As a baseline for her work, Aichatou surveyed all the women of reproductive age in Koulou Koira and scheduled three home visits for every pregnant woman. These visits, she says, "allow us to do pre- and post-natal consultations."

Aichatou's records also allow her to keep track of the women and newborns who can benefit from birth and childcare services at the health facility. "I like to treat a person who is ill, to get them back to health," she says with a smile. Community health worker Aichatou instructs a mother on hygiene practices to keep her and her infant free of Maternal and Neonatal Tetanus in Koulou Koira, Niger. 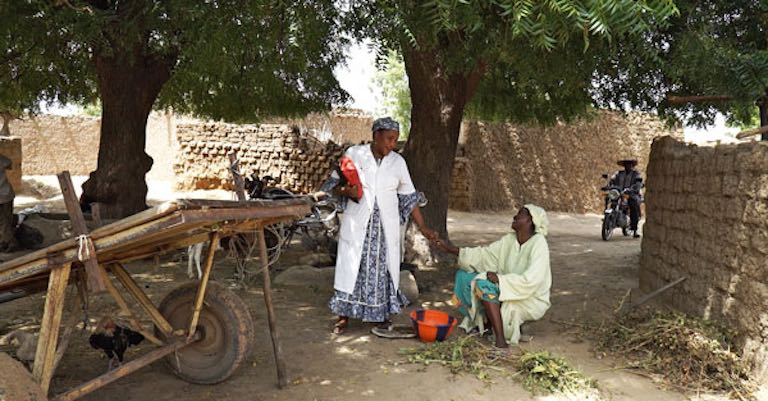 Community health worker Aichatou making the rounds to teach practices to prevent Maternal and Neonatal Tetanus in her village of Koulou Koira, Niger. 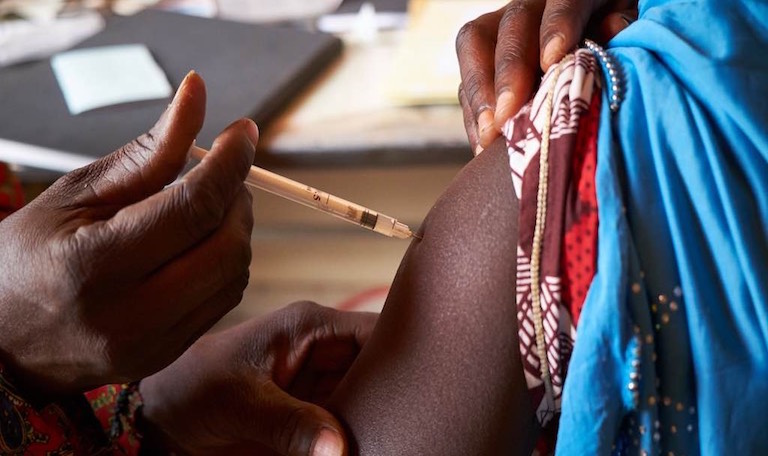 Infant and Maternal Mortality in Niger

The need for such care in Niger is severe. The country's infant and maternal mortality rate is one of the highest in the world. According to the World Bank's most recent data, 57 of every 1,000 babies die within a year of birth.

And as Niger also has the world's highest fertility rate, there's a crisis of infant and child deaths. Many are caused by easily-preventable unhygenic conditions during home births or in infant care — and chief among the causes has been MNT. Tetanus has been a major killer of mothers and their newborns, largely due to unsafe birthing practices. Unhygienic births allow tetanus spores, which are present in the soil the world over, to enter wounds.

Despite these obstacles, thanks to the work of Aichatou and others like her, Niger achieved a historic milestone this June: the country was declared MNT-free. This means that the world is one step closer to eliminating the disease: 19 countries have yet to eliminate MNT, after the recent victories in Niger, Indonesia, Cambodia, India, Mauritania and Madagascar.

Aichatou, in her tiny health facility, serves as the hospital for the immediate area.

Aichatou is well-situated to push Niger to maintain its MNT-free status. In 2010, she received training in how to best monitor mothers and newborns to solve maternal and neo-natal health problems. She continues to work closely with the mothers and babies of Koulou Koira.

Performing home visits in a flower-printed grey dress, she looks more like a neighbor stopping by than a trained nurse. The only thing that gives her away is her white medical coat. She says she uses these visits as an opportunity to "detect various signs of illness, counsel mothers on health care and hygiene, and promote the adoption of Key Family Practices (KFP)."

This list of eight practices — ranging from immunization plans to exclusive breast feeding to using mosquito nets — is designed to save children from deadly, but preventable diseases. By adopting Key Family Practices, Aichatou's mothers learn to protect themselves and their families.

Serving Mothers in the Community

Latifa, 17, is a grateful patient of Aichatou's. "[She] came to see me two days after I gave birth," Latifa says. "She gave us primary health care, informed me on key family practices, and gave me advice on how to take care of my baby, how to breastfeed, and how to look after our hygiene  — mine and my baby's."

A UNICEF partner has given out motorbikes to health facilities in the southwest of Niger, where Koulou Koira is located. The bikes are used by nurses like Aichatou to cross the sometimes long distances between houses and villages for home visits to mothers and newborn babies. Despite the aid, Aichatou feels that more resources should be given to make home visits easier. "With our low income, it is difficult to travel five to eight kilometers to get fuel to carry out home visits to see these women," she protests.

“The message I wish to give to the authorities is the need to promote scaling up”, she proposes. "This will allow other health workers to take care of mothers and newborns, as we do, and reduce the mortality rate, which is what we are trying to do in Niger”.

Join Us on the Road to Victory over MNT

Since 2011, when Kiwanis first began supporting the global MNT elimination initiative, 20 countries have eliminated maternal and neonatal tetanus, most recently Niger, Indonesia, Cambodia, India, Mauritania and Madagascar. But MNT remains a public health threat in 19 countries. The women and newborns most at risk live in areas scarred by poverty, poor medical infrastructure or humanitarian crises. Please join UNICEF and Kiwanis in the fight to eliminate this excruciating disease.