Fighting Food Insecurity with UNICEF and Partners in Sudan

Severe acute malnutrition, and the food insecurity that leads to it, requires a multipronged approach. UNICEF and partners are working together to bring Ready-to-Use Therapeutic Food to Sudan.

When 20-year-old Fatima Khalif took her 9-month old daughter, Zainab, to a UNICEF-supported nutrition center in Kassala, Sudan, she was surprised to learn that Zainab was severely malnourished. “I have four other children, and it gets very difficult for me to properly look after all of them as well as manage all other household chores," says Fatima.

Little Zainab is not alone. Approximately 2.4 million children in Sudan are affected by malnutrition. Among children under 5, acute malnutrition is above emergency thresholds in many areas across the country, with many factors contributing to this ongoing problem. 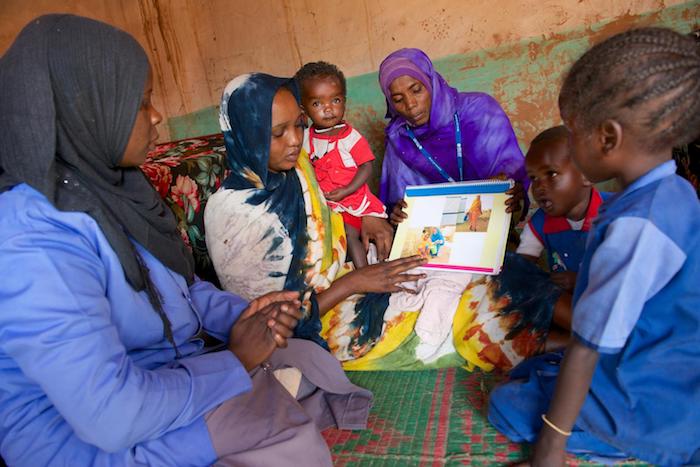 Health worker Faiza Mohammad Mousa, center, goes door-to-door in the Zamzam camp for Internally Displaced People in North Darfur, Sudan, teaching mothers about the importance of a balanced diet for their children. © UNICEF/UNI165575/Noorani

Conflict, unpredictable weather patterns and child marriage all contribute to malnutrition in Sudan

Sudan has a long history of conflicts and crises that continues to this day. Increasing instability followed the secession of South Sudan in 2011 and fighting between government forces and militia groups has escalated throughout the region. This violence, compounded by food insecurity in the border states of South Sudan, resulted in 192,404 South Sudanese refugees arriving in Sudan in 2017 alone. Sudan is also currently hosting refugees from the Central African Republic (CAR), Chad, Eritrea, Ethiopia, Syria and Yemen. This strain on resources is especially grave during the annual ‘hunger gap’ — the four months from May to September — which occurs when unpredictable rain patterns affect food supply levels. Food prices are also relatively high so regular meals are out of reach for many impoverished families. 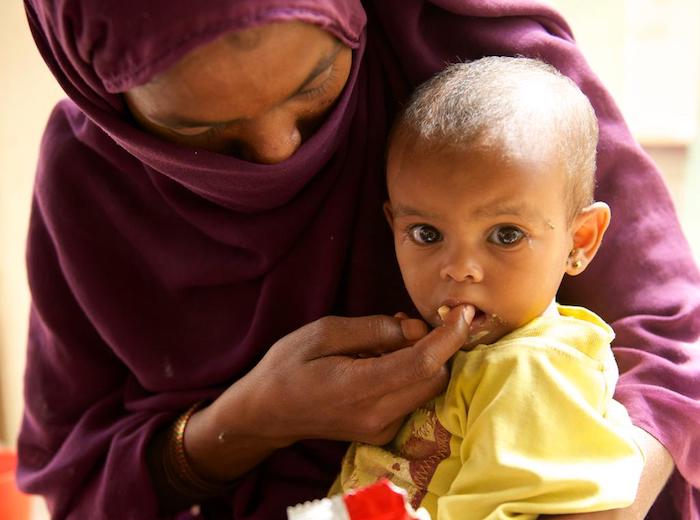 The health of the child begins with the fitness of the mother. In Sudan, a baby’s health can be put at risk by early marriage. Sudan is among the African countries with a high prevalence of child marriage. Across the country, 38% of women aged 20-49 were married before the age of 18, and 12% were married before the age of 15. A young girl's body requires nutrients to finish growing. A growing fetus also has nutritional needs. This competition for limited nutrients between a teenage mother and her unborn child is one of the reasons why nearly one-third of babies born in Sudan are underweight and undernourished, and 1 in 10 mothers are malnourished.

UNICEF works with partners in Sudan to support nutrition centers where trained workers and volunteers provide crucial lifesaving interventions, including early identification, referral and timely treatment of malnourished children. In 2017, UNICEF and partners targeted 250,000 children to be treated for severe acute malnutrition (SAM) in Sudan. Some 202,000 children received services, or about 81 percent of the target group. Treatment of malnutrition is a multi-sectoral approach that includes the provision of quality healthcare, safe water, improved sanitation and proper hygiene services. 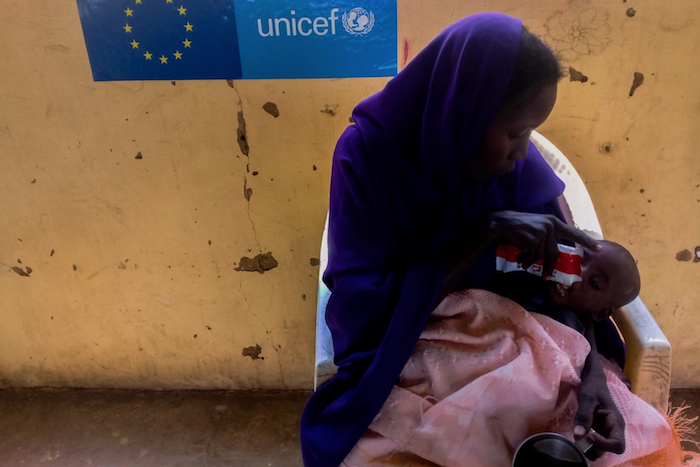 In addition, UNICEF procures and distributes Ready-to-Use Therapeutic Food (RUTF) to treat children suffering severe acute malnutrition worldwide. RUTF is a specially formulated, energy-packed paste made from peanuts, oil, sugar, milk powder and vitamin and mineral supplements. Often referred to as a miracle food, it is UNICEF’s most effective tool for treating acute and severe acute malnutrition. UNICEF is the global leader in RUTF procurement, purchasing and distributing 80 percent of the world's supply.

UNICEF is the global leader in RUTF procurement, purchasing and distributing 80 percent of the world's supply

“Significant progress has been made in addressing severe acute malnutrition in Sudan. Over the last couple of years, UNICEF has been able to reach and save the lives of hundreds of thousands of children through timely lifesaving interventions and services. Sustaining the gains made and building the resilience of communities and caregivers will be an important step going forward”, says Abdullah Fadil, UNICEF Sudan Representative.

Top photo: A health worker measures the circumference of 9-month-old Zainab's upper arm during a malnutrition screening at a UNICEF-supported nutrition center in Kassala, Sudan. UNICEF/UNI166254/Noorani