As Ethiopia Conflict Rages On, Children Pay the Highest Price

Violence. Malnutrition. Displacement. As the situation for children and families in and around Ethiopia's Tigray region deteriorates, UNICEF issues an urgent appeal for support to ramp up relief efforts.

Shumuye, 10, lives with his family in Yechella, in central Tigray, an area that has seen intense fighting due to conflict in northern Ethiopia. Their house was burned down during the fighting, and they have been staying with extended family.

Shumuye’s father, Barhe Atsma, was taking advantage of a reprieve in armed fighting to farm his land when his son encountered a grenade. It exploded, shattering his leg and killing a friend. 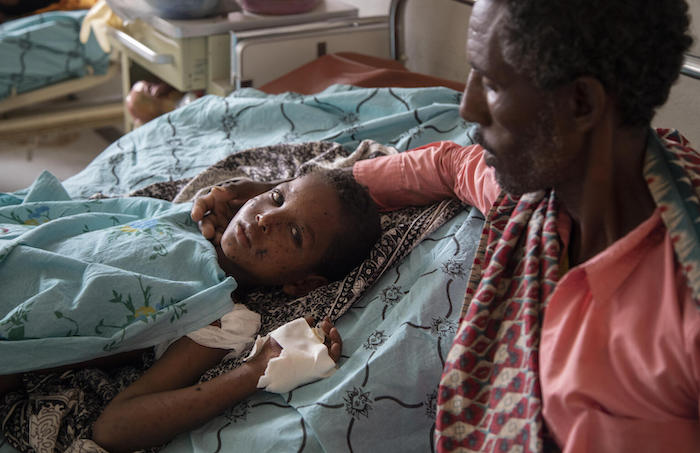 With his father by his side at Ayder Hospital in Mekelle, Tigray, northern Ethiopia, Schumuye, 10, recovers from extensive injuries he suffered after picking up what turned out to be a grenade. The presence of unexploded ordnance is just one of many dangers to children after over a year of fighting in the region. UNICEF and partners are responding as the humanitarian crisis intensifies. © UNICEF/UN0497322/Nesbitt

The presence of unexploded ordnance is just one of many threats to children in Tigray, due to an ongoing crisis that has only escalated since fighting erupted in the region over a year ago. Since then, scores of children have died of starvation, with many more at risk as the civil conflict extends deeper into neighboring regions Afar and Amhara.

As access to some of the worst-affected areas increased, UNICEF's worst fears about the extent of child malnutrition were confirmed, according to agency reports.

Based on screening data from July, UNICEF estimated that 100,000 children were at risk of severe acute malnutrition over the next 12 months — 10 times higher than the country's average annual caseload. At the end of October, UNICEF reported that 80,000 children under age of 5 were severely malnourished in Tigray, Afar and Amhara.

Nearly half of all pregnant and lactating women were found to be acutely malnourished as well, increasing their risks of pregnancy- and childbirth-related complications. Malnutrition during pregnancy also increases the risk of delivering a low-birth-weight baby prone to sickness and death. 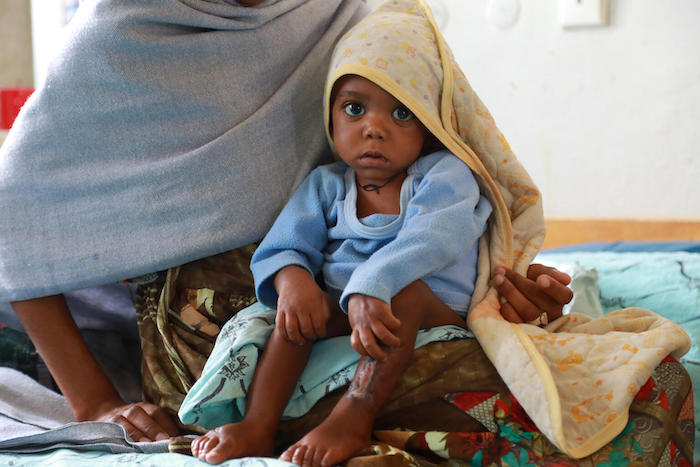 A mother cares for her severely malnourished baby at a UNICEF-supported stabilization unit in Ayder hospital in Mekelle, the capital city of the Tigray region in Ethiopia. Due to the conflict, UNICEF estimates that more than 100,000 children in Tigray could suffer from life-threatening severe acute malnutrition over the next 12 months – a tenfold increase over the average annual caseload. © UNICEF/UN0539132/Leul Kinfu

Malnutrition is just one issue. In its most recent situation report, UNICEF also reports that:

To reach those in need, UNICEF is supporting mobile health and nutrition teams to deliver essential services. 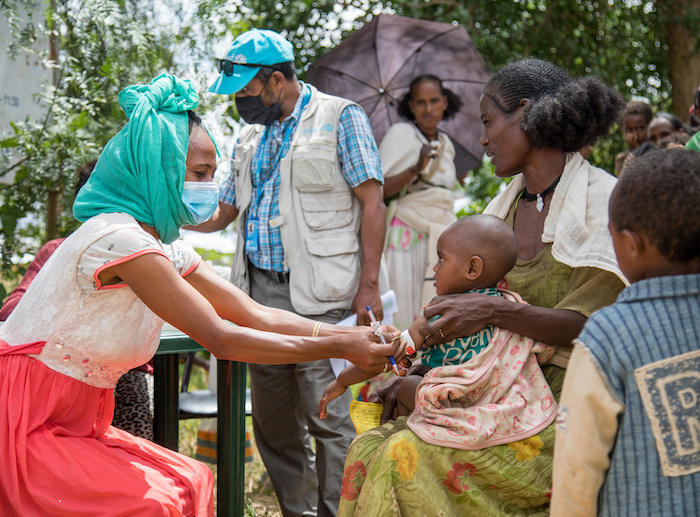 A health worker checks a child for malnutrition at a health center in Abi Adi in central Tigray, Ethiopia, where UNICEF and partners are providing a range of nutrition services to at-risk children. © UNICEF/UN0539177/Leul

UNICEF is also providing education — both formal and informal — across Ethiopia's emergency-affected areas. This involves setting up temporary classrooms at IDP camps, reopening schools, providing learning materials and training teachers, among other measures. A total of 177,687 students — 48 percent of them girls — have been reached through these efforts so far.

For UNICEF, education is also a form of protection

Returning children to school, whether in a regular classroom in a school building or in a temporary learning space under a tent, offers many benefits. It helps protect them from physical danger, abuse and exploitation, including recruitment into armed groups. It improves their access to nutrition, safe water, health care and hygiene supplies. And it serves as a source of psychosocial support, by giving them the stability and structure they need to cope with everyday trauma. 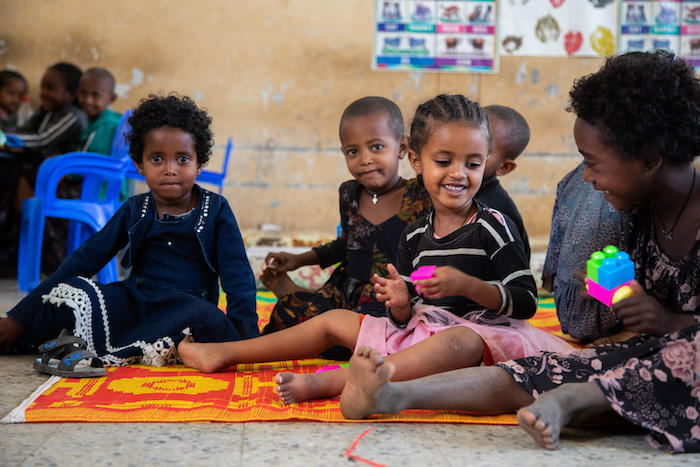 Many schools in Ethiopia closed in March 2020 because of COVID-19 — and then remained closed due to prolonged conflict in the Tigray region. UNICEF and partners have started reopening schools as part of an integrated strategy for delivering not only education support but also critical child protection services. ©UNICEF Ethiopia/2021/Esiey Leul

Water, sanitation and hygiene (WASH) is another major focus. UNICEF and partners are reaching hundreds of thousands more people every month with emergency water supplies, either by trucking it to them or repairing or maintaining existing water systems. 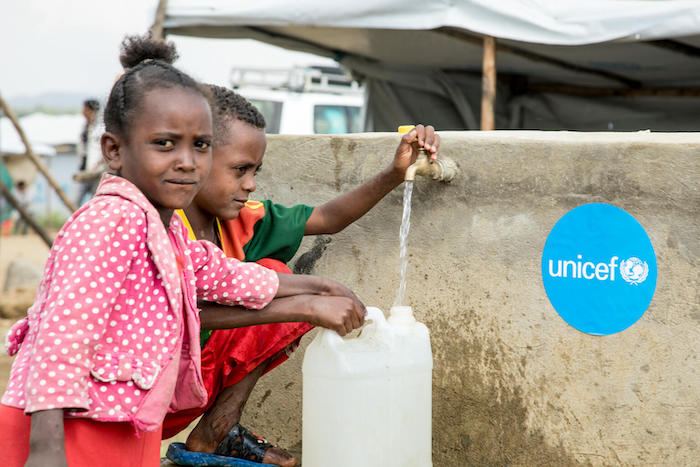 Children draw clean, safe water from a tap recently installed at a camp for displaced families in Mekelle, Tigray region, Ethiopia. As part of their ongoing humanitarian response in the region, UNICEF and partners have installed over 130 water tanks and 33 latrines and are trucking in water to meet the daily needs of 20,000 IDPs. ©UNICEF/UN0539176/Leul

More support is needed to help UNICEF ramp up its response in Ethiopia to meet urgent needs. The targets for specific interventions are outlined in UNICEF's Humanitarian Action for Children (HAC) plan for 2022.

Help UNICEF save and protect vulnerable children in Ethiopia and other countries in crisis. Donate today. 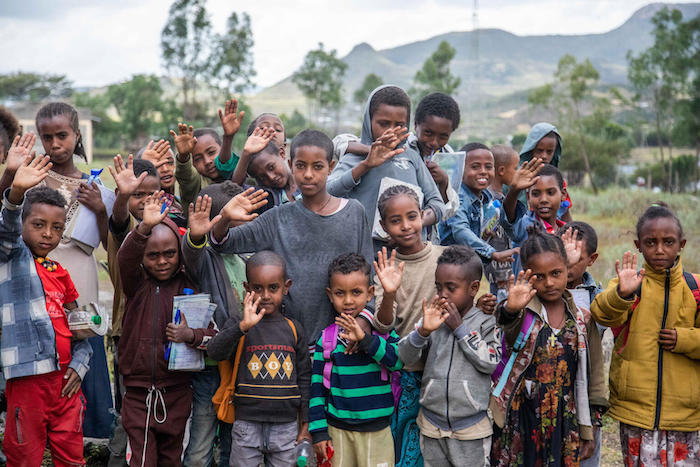 Children in the embattled Tigray region of Ethiopia are returning to school with support from UNICEF and partners. Above, students gather in a schoolyard in Adikeyeh town, central Tigray. © UNICEF/UN0539175/Leul