Fleeing air strikes and artillery fire in Mariupol, 7-year-old Maksym and his family left home in a broken car. Two million children have been forced to leave Ukraine as the war rages on.

When the bombs first fell on Mariupol in southeastern Ukraine, 7-year-old Maksym used to cry. Now, after all that he and his family have been through, he barely blinks at the memory.

After five weeks of war, not much remains of Maksym's home city in Ukraine's Donetsk region. Kindergartens, schools, shops, factories, sports facilities and theaters have all been destroyed. Water and food are in short supply. Maksym and his family have little hope of returning anytime soon.

People ran to save their children, to escape from hell.

They can still vividly recall the moment they decided to leave.

"One day, a man ran down the street and shouted 'Evacuation!' " Maksym's mother said. "People ran to save their children, to escape from hell."

Fear filled the air as the family piled into a rusty old car and headed for the checkpoint to leave Mariupol. The car juddered as it reached the gates. Guards raised their guns.

"We raised our hands and shouted 'Don't shoot! The car is broken!' "

The guards gave the children juice and candy and tried to persuade Maksym's parents to stay.

We raised our hands and shouted 'Don't shoot! The car is broken!'

At another checkpoint further up the road, the family heard explosions. When they drove on, the ground was on fire. They had narrowly escaped certain death.

The car ran out of gas in Urzuf, and the family was forced to continue on foot. Eventually, they found transportation to Uzhgorod and from there, traveled on to Slovakia.

They are no longer in the line of fire. But the scars remain. "Is it a plane?" Maksym asks his grandmother every time an airplane flies overhead. "Will there be a bang?" 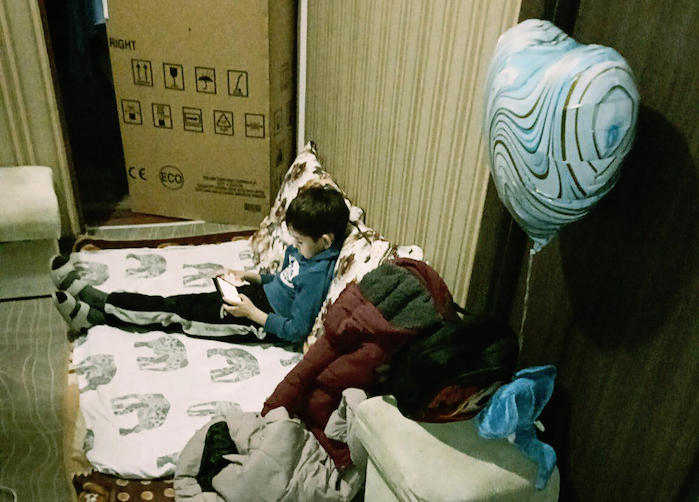 On March 23, 2022, 7-year-old Maksim sat on the floor of his family's apartment in Mariupol with packed suitcases nearby. Later, the family piled into a broken car and began their long and harrowing journey to the border. © UNICEF/UN0616554/Hrom

In five weeks of war, 4.5 million children — more than half of Ukraine's child population — have been forced out of their homes

As of March 31, according to the UN Office of the High Commissioner on Human Rights, 112 children have been killed during the conflict and 149 have been injured. These figures represent only those reports that the United Nations has been able to verify. The true toll is likely far higher.

"The situation inside Ukraine is spiraling," UNICEF Executive Director Catherine Russell said on March 30. "As the number of children fleeing their homes continues to climb, we must remember that every single one of them needs protection, education, safety and support." 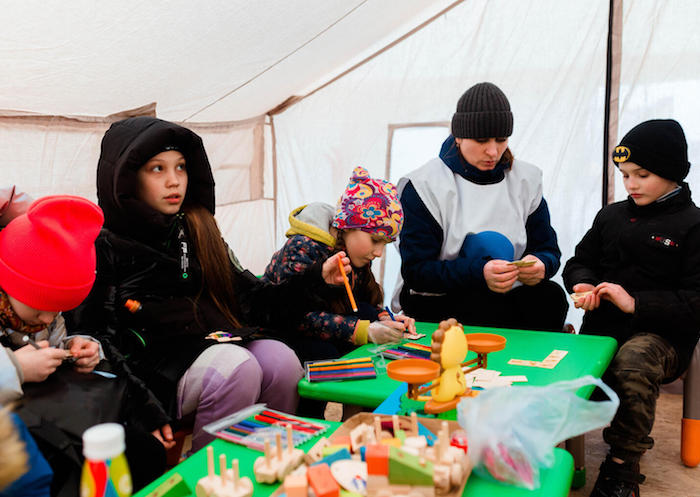 To aid families fleeing Ukraine, UNICEF and UNHCR have opened six Blue Dot humanitarian refugee support centers in Romania and Moldova, with one center in Poland in development. The centers already open have so far reached 24,263 people. An additional 26 Blue Dot centers are being established in Hungary (4), Moldova (4), Poland (10), Romania (3) and Slovakia (5), which, once operational, will reach at least 13,000 people, including 5,200 children, per day.

UNICEF is working with partners to reach children in Ukraine and in neighboring countries with humanitarian assistance. Inside Ukraine, UNICEF has delivered medical supplies to hospitals and maternity homes in Dnipro, Donetsk, Kharkiv, Kyiv, Lviv, Mykolaiv, Odessa, Vinnytska and Zhytomyr, improving access to health care for 596,000 mothers, newborns and children since Feb 24.

Despite access challenges, more than 68,000 people have been reached with drinking water and hygiene supplies in communities under siege in Donetsk, Luhansk, Kharkiv, Dnipro, Kyiv and Lviv.

UNICEF is also increasing the number of mobile child protection teams working inside acute conflict zones from 22 to 50, and has delivered 63 truckloads of lifesaving supplies to support the needs of more than 2.2 million people.

A new cash transfer program will reach 50,000 households with children in Ukraine

On March 31, UNICEF and Ukraine's Ministry of Social Policy launched a multipurpose cash transfer program to support the immediate needs of vulnerable families as the conflict continues to rage across the country. The program will provide the equivalent of $74 per person to 50,000 households struggling to provide for their children. The cash assistance targets households with three or more children, including at least one child under age 2, as well as families with two or more children, with one living with a disability.

"This horrific conflict has devastated children's lives," said Murat Sahin, UNICEF Ukraine Representative. "Families are not only trying to stay alive, but also struggling to provide for the essential needs of their children. This cash support will at least give some buffer and relief. But more needs to be done."

Help UNICEF scale up relief operations in Ukraine and neighboring countries. Your contribution can make a difference. Donate today.

Top photo: Maksym, 7, and his family escaped from Mariupol, Ukraine, in March 2022 after weeks of terror and bombardment. The family traveled to Uzhhorod, where this photo was taken, then continued on to Slovakia, where they are now living as refugees. © UNICEF/UN0616557/Hrom