As Muslims all over the world prepare to celebrate Eid al-Adha, a reminder to stand with UNICEF to protect vulnerable children growing up in impossible circumstances.

For impoverished families and children displaced by violence, the challenges of daily life under the COVID-19 pandemic are greatly magnified. Social distancing and regular handwashing are a luxury for parents struggling to keep their children safe in crowded refugee camps and informal settlements. COVID-19 has also disrupted the delivery of lifesaving vaccines and immunization services, threatening to reverse decades of hard-won progress.

Now more than ever, children growing up in some of the world's most challenging circumstances rely on UNICEF for the support and services they need to survive.

“One year into the COVID-19 pandemic, progress has gone backward across virtually every key measure of childhood,” said Henrietta Fore, UNICEF Executive Director, in March. “The number of children who are hungry, isolated, abused, anxious, living in poverty and forced into marriage has increased. At the same time, their access to education, socialization and essential services, including health, nutrition and protection has decreased. The signs that children will bear the scars of the pandemic for years to come are unmistakable.”

In Yemen, UNICEF child-protection programs are inspiring children to innovate and dream

After more than six years of civil war, increased hostilities are pushing thousands of families to flee. Yemen's health care, water and sanitation systems are in ruins.

Over 12 million young lives are in danger and their future prospects in question. Skyrocketing fuel and food imports have put the essentials families need to live out of reach. Almost 2.3 million children under 5 are at risk of acute malnutrition — among the highest levels seen yet in Yemen. The combined effects of the prolonged conflict and COVID-19’s assault on education has pushed just over 2 million school-age girls and boys out of school.

UNICEF has been in Yemen for decades, treating severe acute malnutrition and providing health services, safe drinking water, sanitation and hygiene. Over the past year, UNICEF and partners have continued that work while responding to COVID-19, keeping primary health care centers and hospitals damaged by war running and providing emergency cash transfers to families impacted by the nation's worsening economic crisis. In May, UNICEF and the World Health Organization launched a door-to-door immunization campaign across 14 Yemeni governorates, vaccinating millions of children against polio.

Life is unbelievably difficult in Yemen, but children still have hopes of a brighter future. Mohaned, a student from Sana'a, took part in an Innovation Lab activity offered by his school’s UNICEF-supported child protection program. Mohaned says COVID-19 was the inspiration for his invention, a fingerless glove with a sensor that lights up and beeps when the person wearing it gets too close to another: “This invention alerts people to social distance, especially in public places, where transmission of the disease and infection is quick, and also helps blind people sense obstacles," explains Mohaned.

His invention also has him focusing on his future: “I aspire to be the owner of a pharmaceutical manufacturing company and the biggest innovator in the world."

As Syria marked a decade of war in March, children continue to bear the brunt of triple crises: continued conflict, economic downturn and the COVID-19 pandemic. For the six million children born in Syria and as refugees in neighboring countries since the civil war began in 2011, death, displacement and destruction are facts of life. Violence in northwest Syria has left the 3.4 million people, including 1 million children, who live in camps for the displaced are fully reliant on humanitarian aid to survive.

UNICEF and partners are on the ground in northwest Syria and across the region to protect children, help them cope with the impact of conflict and resume their childhoods. In 2020, thanks to a generous contribution from Kuwait, UNICEF supported the treatment and recovery of 856 children under 5 from severe acute malnutrition in rural Damascus through a community-based program through 135 health facilities and 48 mobile teams that travel to help children in need. 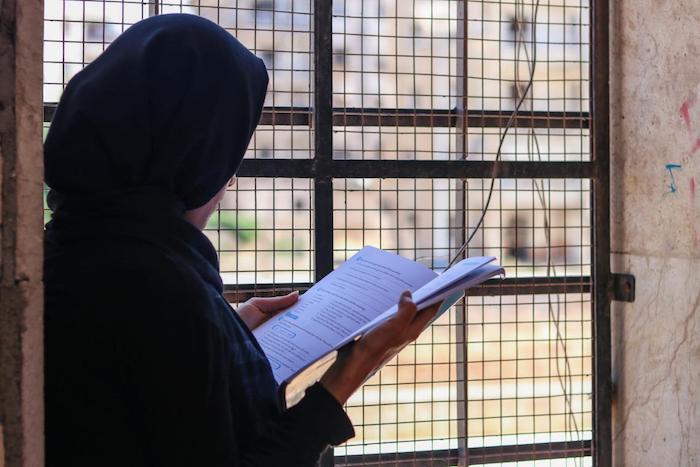 Many children in Syria know nothing but loss, but despite all the disruptions they've experienced, the multiple relocations and uncertainty, Syrian children and young people still show incredible resilience. In May, brave 12th graders from war-ravaged areas like Aleppo traveled through conflict zones to take national exams.

UNICEF and partners provided everything from remedial classes, test prep, and psycho-social support to funding for transportation and COVID-19--safe accommodations to set them up for success. That assistance helped Najah, a 19 year old from Manbij, northeast of Aleppo, make up for lost time. Her family was against her going to school, and she had to study in secret, pawning her jewelry to buy textbooks. But she has persevered, hoping to become a role model for young girls who have big ambitions like herself: “I had wanted to become a doctor," says Najah. "But now I would like to become a journalist, to help people see the truth.”

It has been four years since militia chased almost 725,000 terrified Rohingya refugees across Myanmar's Rakhine State border into Cox's Bazar, Bangladesh. The vast refugee camp that sprung up to accommodate them is a sea of tents pitched on steep hillsides crosshatched with paths that turn into muddy rivers during monsoon season.

A crowded refugee camp makes COVID-19 prevention measures like social distancing and regular handwashing difficult. But UNICEF is doing its best to keep the 900,00 residents of Bangladesh’s temporary settlements safe. To help reduce the spread of COVID-19, UNICEF and partners are providing safe water and soap supplies and have installed communal handwashing stations. By the end of 2020, UNICEF had provided safe water and sanitation services and supplies to 240,000 Rohingya refugees in eight camps and completed over half the 40 solar-powered water networks planned for construction. Through radio and television broadcasts, children are also getting lifesaving information on protecting themselves and their communities against COVID-19. Sharifa, pregnant with her first child, holds her infant nephew in front of shelters destroyed by a massive fire that swept through the Balukhali area of the Rohingya refugee camps. UNICEF immediately responded to help the tens of thousands of residents like Sharifa, who lost their homes. © UNICEF/UN0431933/Mohsin

Schools and learning centers have been shut down to prevent the spread of the virus. But since the Myanmar educational curriculum was approved for middle and high schoolers in the camps, UNICEF and partners have been preparing to expand educational offerings to 10,000 students in grades six to nine once they reopen.

UNICEF won't stop until all children receive the care and services they need to reach their full potential. This Eid al-Adha, give children hope. Your generous donation will help children and families in need by supporting UNICEF's lifesaving programs.

Top photo: Almost 2.3 million children under 5 are at risk of acute malnutrition in Yemen. But UNICEF is on the ground, treating children like Afnan, seen here on her fourth day of treatment with therapeutic food at a UNICEF-supported center in Yemen’s Hudaydah governate. © UNICEF/UN0456881/Abaidi