Ebola in Sierra Leone —The Joy of Survivors

At center of a terrifying outbreak, 7-year-old Vandy survived Ebola.

Jo Dunlop is a UNICEF consultant based in Sierra Leone.

When you arrive in Kenema, one of the worst-affected areas of Sierra Leone, there’s a feeling that Ebola has settled in with no plans to move on any time soon.

Chlorine buckets sit outside most restaurants for people to wash their hands. Ebola information posters are plastered on buildings. Crackly radios are loudly broadcasting conversations about Ebola. People are talking about  "dis Ebola bisnis" relentlessly on the street. Handshaking has been replaced by a brush of elbows.

"I am so happy for this day. I thank God that he has helped me survive."

In all of West Africa, including Guinea and Liberia, Sierra Leone is now recording the highest number of new Ebola cases each week. Spending a few days around those most affected was an unforgettably sad experience. I was heartened, however, by meeting some of the lucky people who are surviving the disease.

Their numbers are increasing – growing gradually to a current total of 143 people across Sierra Leone out of the almost 500 people who have contracted the virus.

And in places like the Ebola treatment center on the grounds of Kenema Hospital, now packed to capacity with 45 patients, their stories are emerging regularly.

Each day at around 3 p.m., survivors are released from the center. In a place where so much tragedy exists, it's a moment of unlikely joy and relief. Those who make it through, like Vandy Jawad, 7, are symbols of hope and survival. 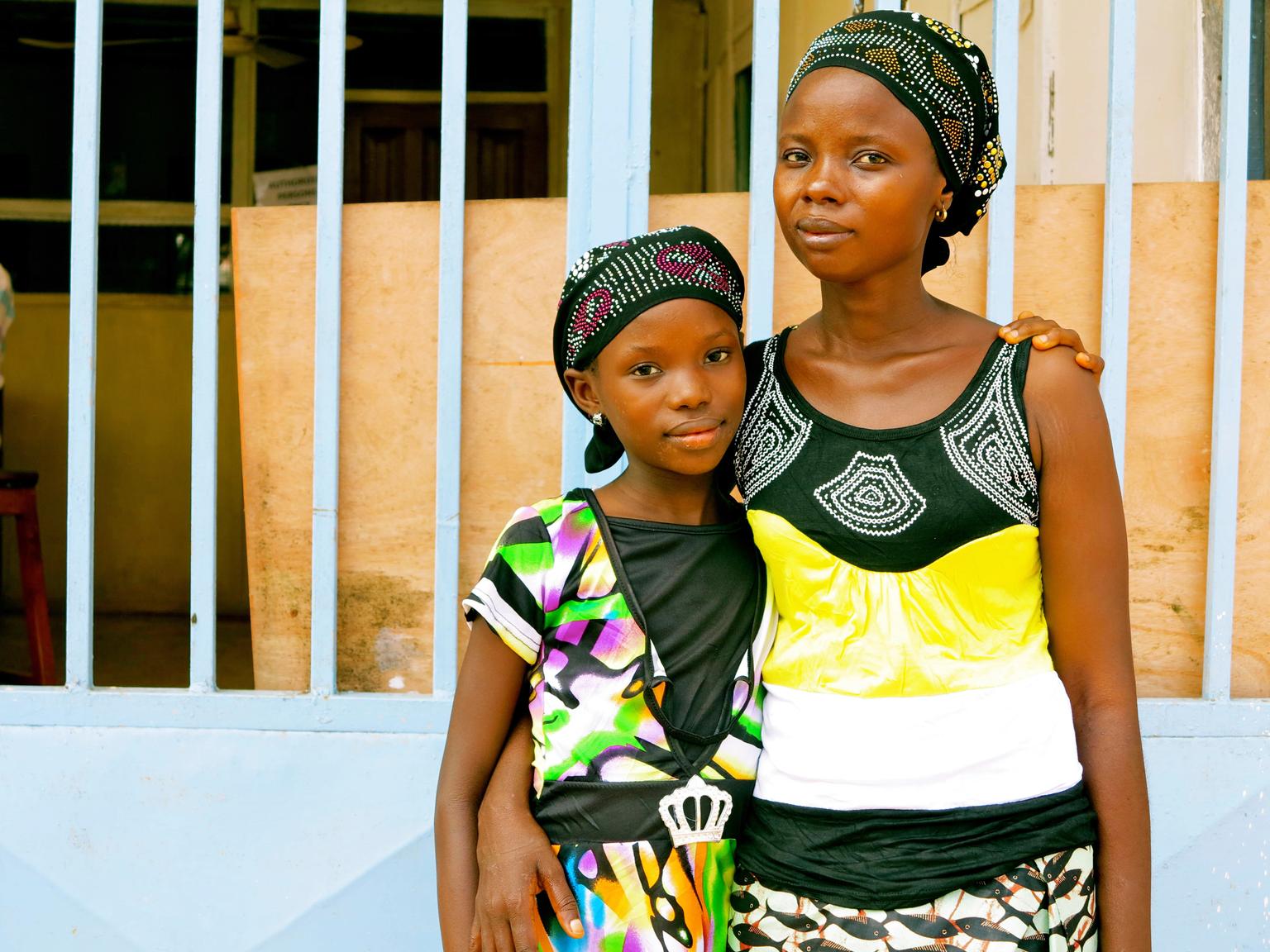 Fatmata Sesay stands with her 11-year-old daughter, Tata, both survivors of Ebola in the city of Kenema, Sierra Leone. Fatmata contracted the disease while working as a nurse in Kenema Government Hospital's Ebola treatment center.  ©UNICEF/NYHQ2014-1059/Dunlop

Vandy contracted the virus in Daru village, about 40 km. from Kenema and one of the country's hardest-hit communities. According to nurses, he displayed very serious symptoms when first admitted to the treatment center.

“That small boy was very, very sick. We did not think he would survive, as so many haven’t,” says Sister Nancy Yoko, the nurse in charge of the center.

Vandy spent a month at the center and started showing signs of recovery within a few weeks, slowly gathering his strength. When he finally achieved a negative test result revealing the absence of Ebola virus in his system, it was time for him to go home. “Little Vandy provided laughter at the most unlikely moments inside that ward. I’m so happy for his recovery,“ says a British volunteer nurse who treated him.

"Little Vandy provided laughter at the most unlikely moments inside that ward."

Before patients leave the ward, they are presented with transport money to get home (about U.S. $10), a clean set of clothes and a certificate declaring that they are Ebola-free. They are photographed and congratulated by staff and, in humble way, celebrated for their resilience.

Vandy was also given a small plastic truck. He proudly showed it off to all the nurses before he left the restricted compound area with an enormous grin on his face. “It’s nice for the children to have a toy before they go, it makes them happy.  Look at Vandy,” says Sister Nancy.

Isata Konneh, 35, was another patient whom I met leaving the ward. She had tears in her eyes and proudly displayed her certificate to the nurses. “I am so happy for this day, I thank God that he has helped me survive,” she says.

Many of those contracting the virus are health workers who come in daily contact with very sick patients. Six nurses from the center have died. Among the staff infected is survivor Fatmata Sesay. She was released from the ward with her 11-year-old daughter Tata. 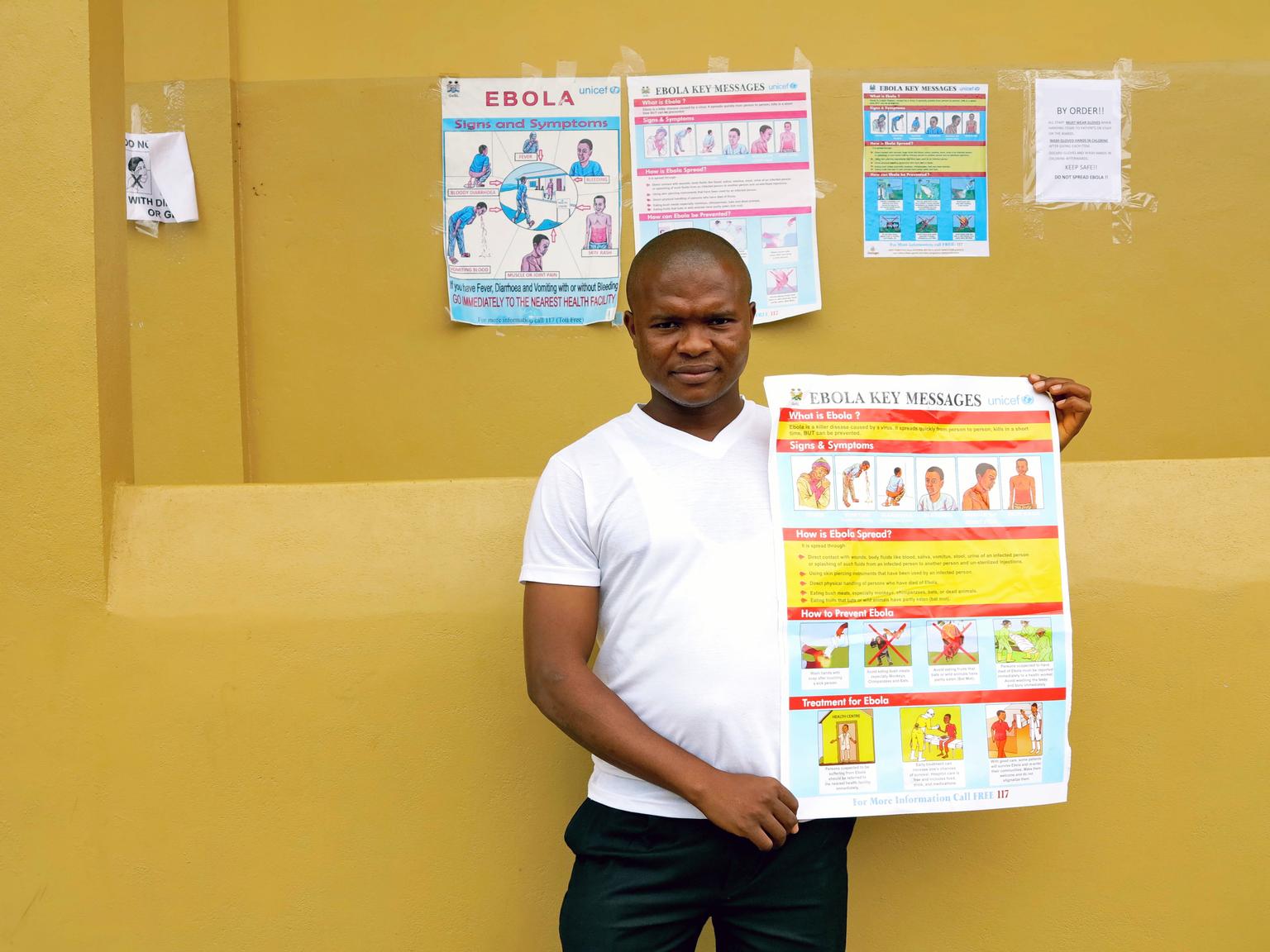 Fatmata spent three weeks in the ward, while Tata was there for two, “I am the happiest person in the world right now. I knew I was very sick, as I was bleeding through my nose and vomiting blood clots, but I am lucky. I am better now and so is Tata. It is not easy to recover from this terrible disease,” says Fatmata.

Fatmata raises her arms in the air — "I thank Allah and the nurses who have cared for me."

As the survivors leave the hospital, local journalists are waiting to photograph them and hear their story. Fatmata raises her arms in the air, “I thank Allah and the nurses who have cared for me. We are alive.”

Survivors play a valuable role in dispelling myths and gaining community support in the fight against Ebola. Some people in Sierra Leone still have not accepted that the disease is real. While many survivors fear stigma, some are coming forward and telling their brave stories. These testimonies will help communities accept that Ebola is a genuine illness and that the community must fight it together.

UNICEF is working with Sierra Leone's Health Ministry and other partners to respond to the Ebola crisis, supplying drugs and equipment and supporting vital communication efforts to ensure that people get the knowledge they need: critical messages about prevention, how to identify symptoms and how to seek medical support.

Ebola has no known cure or preventative vaccine and has a 50%-90% case fatality rate. It spreads through contact with body fluids of infected people who have symptoms of the illness or through animal carriers like fruit bats, primates, antelopes and porcupines. People with Ebola who report early to treatment centers have a greater chance of survival.