Earth Day 2020 dawned with the world on lockdown due to coronavirus, underscoring the urgent need for unity in the face of global crises.

2020 is the 50th anniversary of Earth Day, the day Americans from all walks of life rose up in protest over escalating environmental damage to the planet. Oil spills, rivers so polluted they caught fire, unfettered factory emissions and worsening smog galvanized students, academics and government officials who launched demonstrations nationwide to demand a better, healthier future for the environment and all who live in it.

In 2020, as the global community grapples with the unprecedented threat of the coronavirus pandemic, the day that launched the environmental movement is a powerful reminder of the good people can do by banding together to face global challenges.

When is Earth Day?

Why do we celebrate Earth Day?

The climate is rapidly changing and humans are directly responsible. Climate change undermines many basic human rights, but especially those of the world’s children. Children and young people will be living with the impact of climate change, which is a violation of their rights that will impact the life-support systems that make the world habitable and their futures.

“Climate change has the potential to undermine all of their basic rights and indeed most of the gains made in child survival and development over the past 30 years,” said  UNICEF Executive Director Henrietta Fore in her Open Letter to the World’s Children on the 30th Anniversary of the Convention on the Rights of the Child. “There is perhaps no greater threat facing the rights of the next generation of children.”

The origins of Earth Day

Various people deserve credit for the founding of Earth Day. Morton S. Hilbert, an environmentalist and University of Michigan professor emeritus of public health, is one. In 1968, Hilbert and the U.S Public Health Service organized the Human Ecology Symposium to educate students about the environmental dangers to their health. That symposium helped catalyze a campaign Hilbert and a group of students pursued over the next two years to get what became the first Earth Day off the ground.

1969's Santa Barbara Oil Blowout, a huge oil spill that occurred off the coast of California, was what propelled then Wisconsin Senator Gaylord Nelson to take action. Inspired by the energy of students' anti-war, Nelson announced a teach-in on college campuses to the national media and enlisted Denis Hayes, a young activist, as organizer. The date was set for April 22 to coincide with students' spring break but once the plan was broadened to engage all Americans, the concept drew national attention as a groundswell began to form around the day.

Where does the Earth Day name originate from?

Once a wide range of organizations and faith-based groups came on board and national media picked up the developing story, what had begun as a teach-in turned into a national day of protest and was renamed Earth Day. For the first Earth Day, 20 million Americans — 10 percent of the U.S. population took to the streets in hundreds of cities to protest the environmental damage already done and demand immediate action to safeguard the planet.

After the first earth day on April 22, 1970, the U.S. government took significant measures to protect the environment. The Clean Air Act was passed and the Environmental Protection Agency was created that same year. The Clean Water Act followed in 1972, followed by the Endangered Species Acts in 1973.

Why children are the most vulnerable 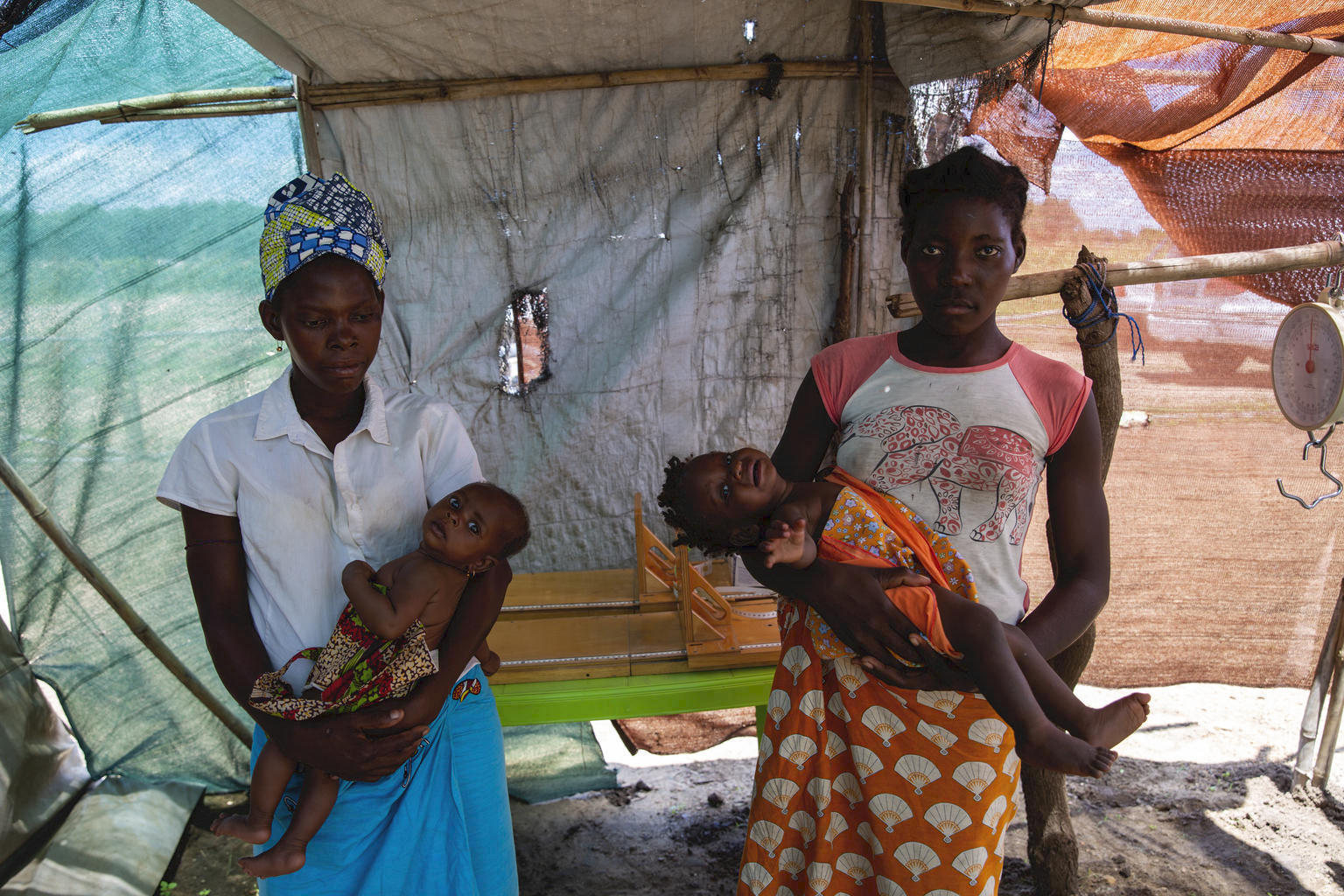 Women bringing their children to be screened for malnutrition at a UNICEF health center in Ndjenja Resettlement camp, Mozambique © UNICEF/UNI310194/Prinsloo

In 2019, extended drought and global warming exacerbated the wild forest and peatland fires that put nearly 10 million children at risk from air pollution in Indonesia. Scientists also blamed global warming for the Australian bushfires that have taken a devastating toll on families and children and killed more than a billion animals.

Pollution poses another danger to children’s health. About 300 million children breathe air that contains exceptionally toxic levels of pollution, which led to the deaths of about 600,000 children under age 5. By 2040, 1 in 4 children will live in areas with extreme water stress and polluted water will make thousands sick.

There is no greater threat to children’s rights than the climate crisis.​ But children have UNICEF, working around the world to mitigate those threats, find new solutions and provide emergency relief. 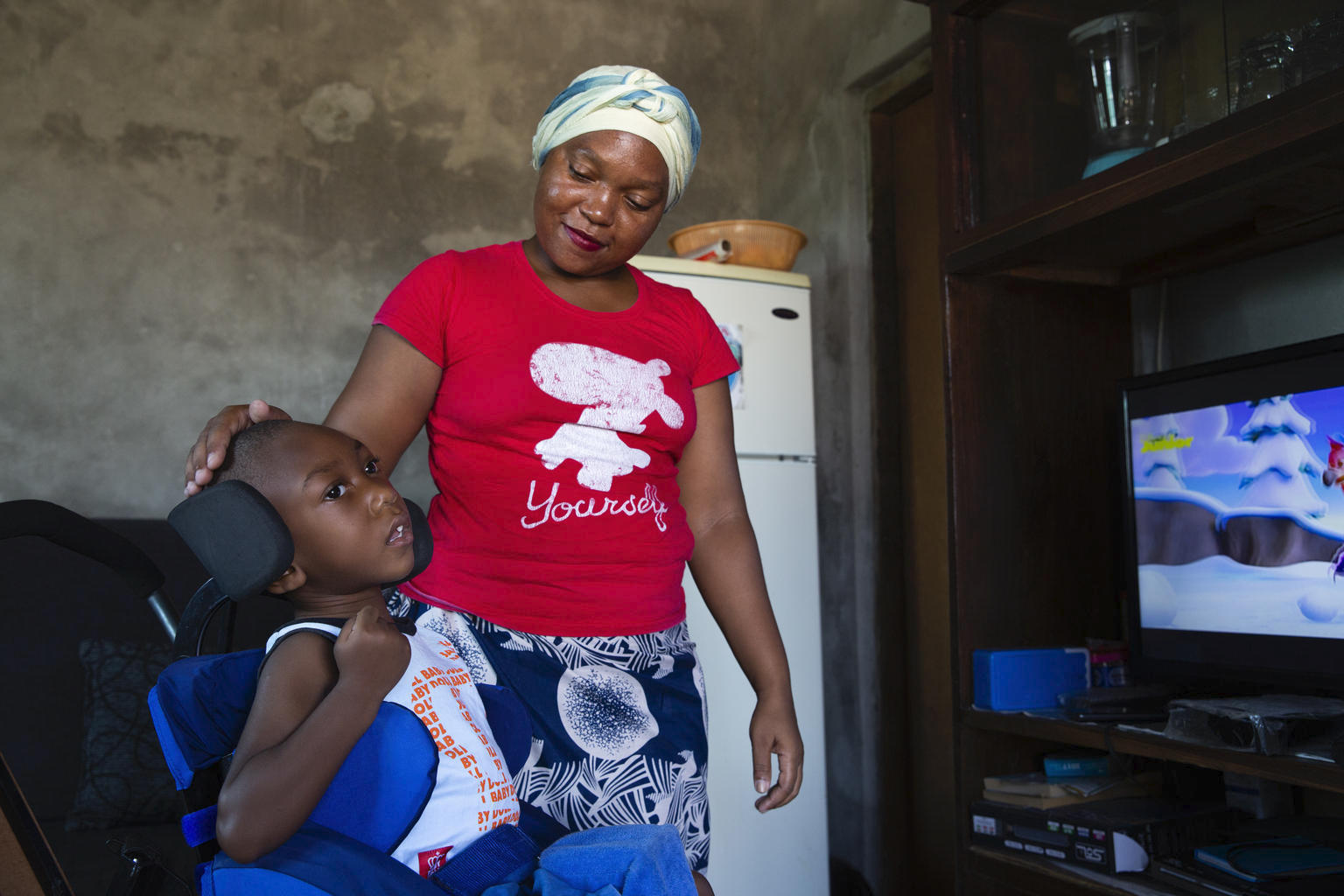 Anna Rosa Aniva stands with her son, Tercio Cangela (4) in his wheelchair provided by UNICEF at their home in Beira, Mozambique © UNICEF/UNI310138/Prinsloo

In 2019, two major cyclones — Idai and Kenneth — hit Mozambique, causing flooding that upended the lives of 1.1 million children. In Beira, one of the areas hardest hit by Cyclone Idai, over 600 people were killed and nearly 240,000 homes destroyed when the superstorm made landfall in March.

One year after the storms, families and children are still suffering. Recent floods and drought have exacerbated the situation.

Food shortages in the area have increased the number of children suffering from severe acute malnutrition (SAM). But since the crisis, UNICEF has been screening and treating thousands of children and providing other essential health services like vaccinations.

Mobile brigades have traveled to remote parts of Mozambique to screen 640,000 children for SAM and provide treatment to over 3,000. Brigades provide other essentials, such as  Vitamin A supplements, vaccines and counsel to mothers on the importance of breastfeeding and other ways they can protect their children from common childhood illnesses.

In Côte d'Ivoire, where overcrowded classrooms mean over 2 million children are out of school, UNICEF has used one of the nation’s biggest environmental problems — plastic waste — to bring education to more children. 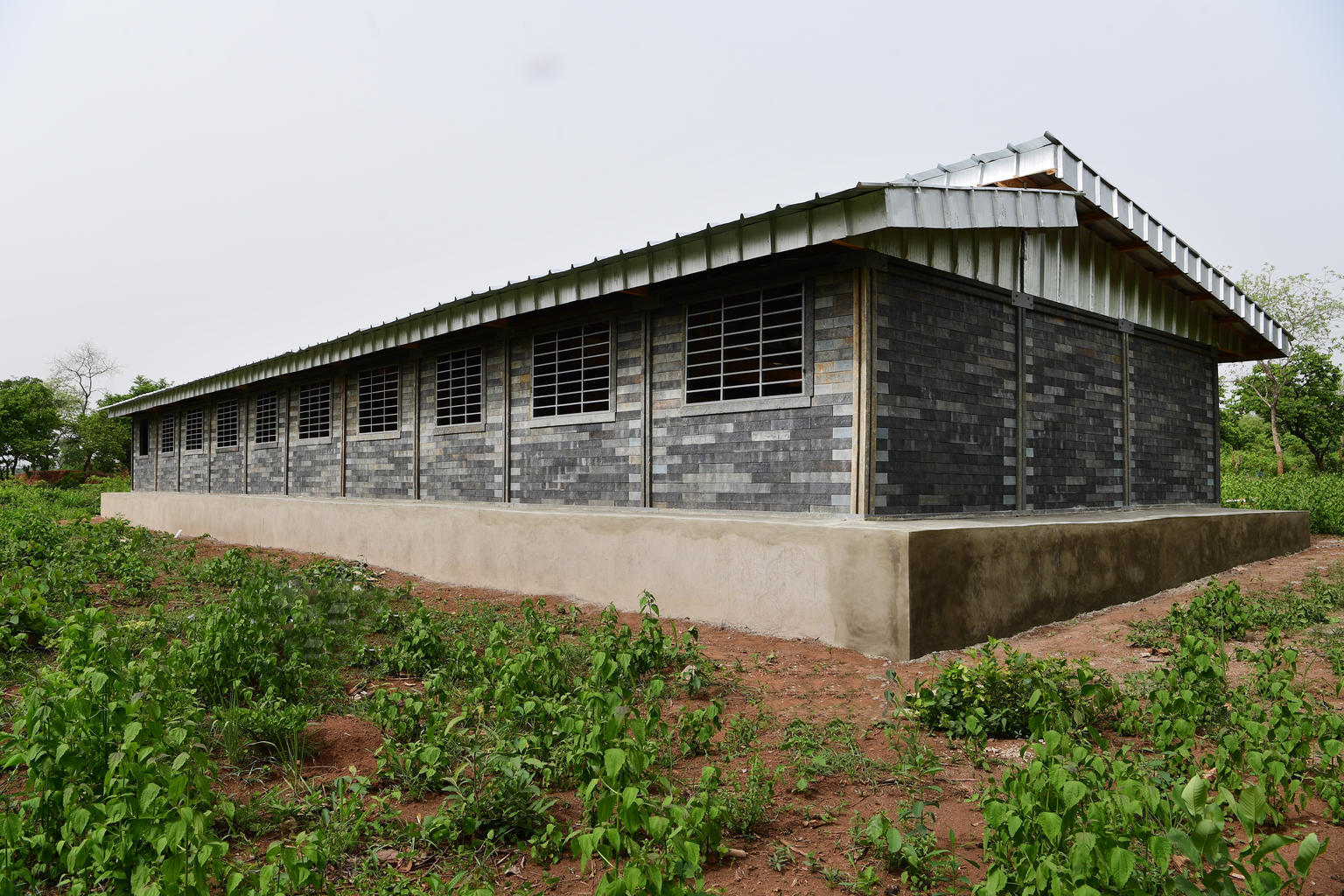 Abidjan, the nation’s largest city, produces 288 tons of plastic waste every day. Unfortunately, most of it ends up in landfills and oceans. UNICEF worked with the Colombian company Conceptos Plasticos to build a factory that transforms plastic waste into bricks. UNICEF then used the recycled plastic bricks to build a model classroom at a school in Gonzagueville, on the outskirts of Abidjan. In the coming year, UNICEF and Conceptos Plásticos plan to build 30 more new classrooms in Côte d'Ivoire.

What are the themes of the 50th anniversary of Earth Day in 2020?

Earth Day offered inspiration and hope as the global community marked its 50th anniversary amidst the global coronvirus pandemic. The world stayed home, rather than marching in the streets. But young people still had many ways to follow the lead of that first generation of climate activists and make themselves heard.

Since the first day Earth Day, young people have been leading the charge to protect themselves and our planet. 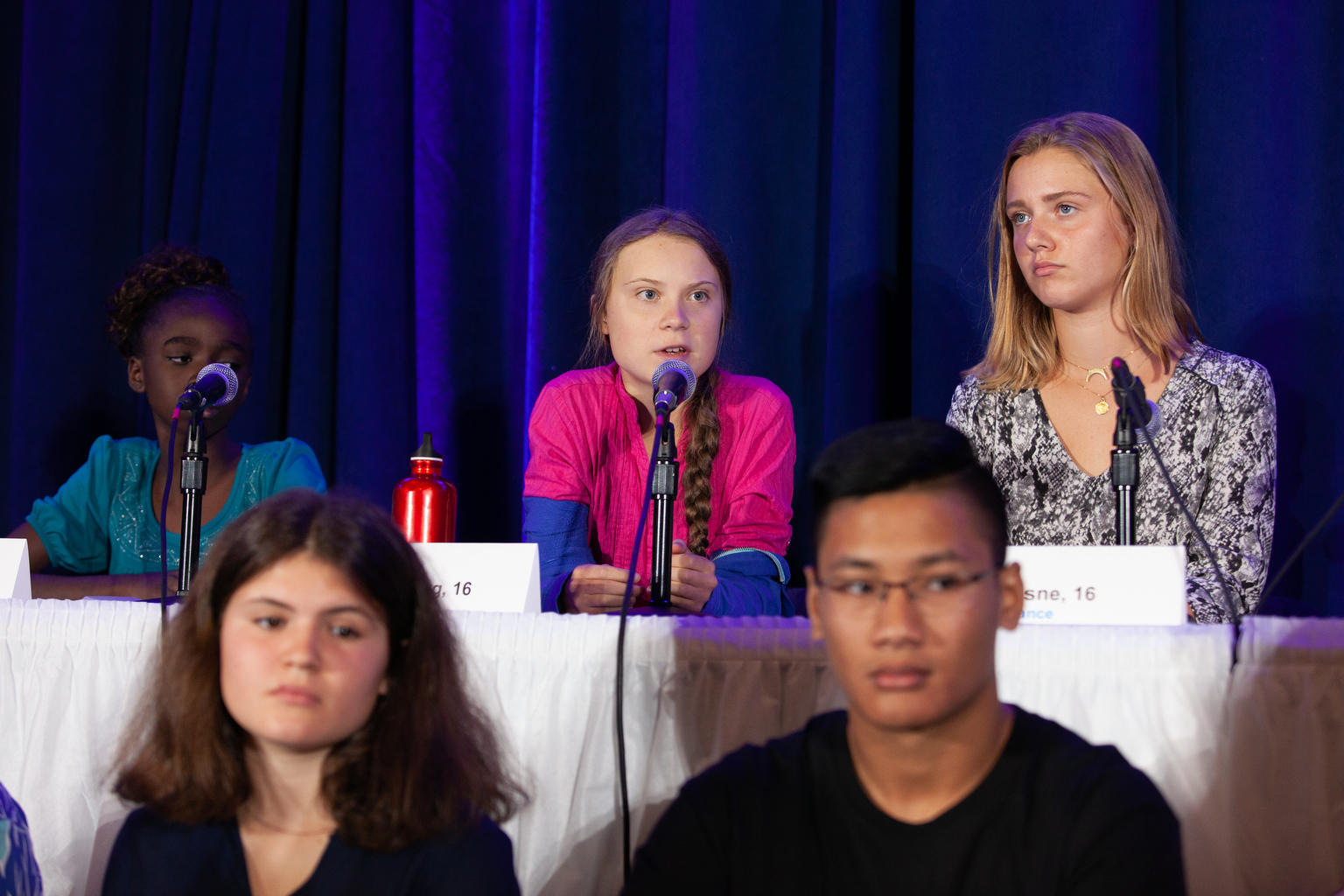 In September 2019, a 16-year-old Greta Thunberg (center) spoke at UNICEF House in New York at a press conference announcing young people’s determination to address the climate crisis. “I’m doing this because world leaders are failing to protect the rights of the child by continuing to ignore the climate and ecological crisis." © UNICEF/UNI207440/Chalasani

Fifty years later, young people are no less committed to the cause. One of the most visible is Greta Thunberg, who began her activism at age 8 after watching a documentary about climate change. From then on, she single-mindedly dedicated herself to reducing her carbon footprint and saving the planet.

In August 2018, she skipped school to stand outside the Swedish Parliament with a sign that read “School Strike for Climate.” From that day forward she became a powerful force for climate action, who has rallied young people around the world to the cause.

On September 23, she and 15 other child petitioners went before the United Nations Committee on the Rights of the Child to call attention to the lack of global government action to address the climate crisis.  The child petitioners, all between the ages of 8-17, asserted that the inaction of UN Members constituted a violation of child rights.

“Change needs to happen now if we are to avoid the worst consequences. The climate crisis is not just the weather. It means also, lack of food and lack of water, places that are unliveable and refugees because of it. It is scary,” said Greta Thunberg.

UNICEF fully supports such activism and encourages kids and teens who are now finishing up their school years at home to use this Earth Day to take their demands for a healthier planet online. UNICEF club and council members, as well as young volunteers, advocates and ambassadors, have been participating in online marches. UNICEF also encourages children and young people to talk with their parents and other family members about the parallels between COVID-19 and climate change. 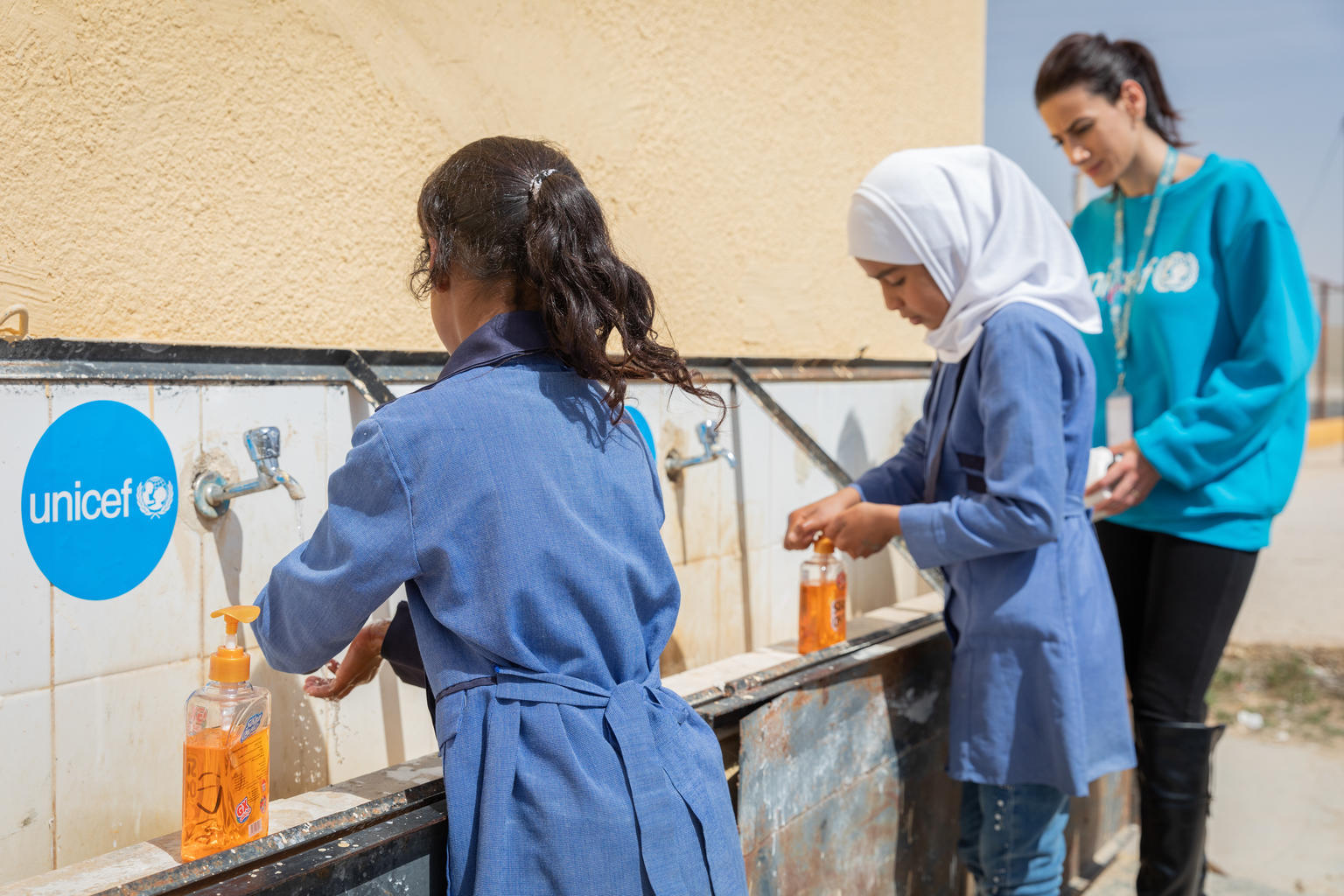 Students at the Al khader primary school in Jordan practice proper handwashing, one of the most effective ways to prevent COVID-19.  UNICEF helped create an Environmental Action Club at the school and is working across Jordan to provide safe water, sanitation and hygiene supplies to the Syrian refugee families living within its borders. © UNICEF/UNI313290/Matas

Both climate change and COVID-19 take the most significant toll on the most vulnerable. In the case of climate change, that’s children. In the case of COVID-19, that’s the elderly. This year, Earth Day gave everyone a chance to think about how to protect themselves and others from the global problems affecting us all.

Children and young people supported the elderly by staying home. Older generations acknowledged young people’s fears by standing up for climate action. By working together, young and old, we can make the world a safer place for ourselves, our families and those who are always hardest hit by any crisis.

What can we do for Earth Day?

In honor of Earth Day 2020, the Earth Day Network launched Earth Challenge, a citizen science app that allows people to document environmental changes in their communities then upload this information to a global database, which tracks air quality and plastic pollution. As the year goes on, functionality will be added so people can track changes affecting insects, climate, food security and water quality.

These are other ways young people have been advocating for climate action from home. Every Friday, Thunberg and other young activists protest online by posting pictures of themselves holding up signs demanding environmental action. This Earth Day, young people followed their lead by:

Top photo: Maria, 32, carries her son ,Antonio, home after a visit to a UNICEF health center in Mozambique’s Ndjenja resettlement camp. After Mozambique was hit by two major cyclones in one season and extreme drought and renewed flooding, UNICEF is addressing the devastating impact of climate change on vulnerable families like Maria’s. © UNICEF/UNI310174/Prinsloo