Dad Tips for How To Give a Child a Happy, Healthy Start in Life

Abdo Gonzalez, like any dad, loves talking about his daughter, Paula:

“I have five friends, and all of us have girls," says the 35-year-old sales coordinator for Tigo a UNICEF-allied communications company. "All the girls are the same age, but Paula is by far the most outgoing — everyone is her friend."

Gonzalez is proud of his child's achievements. But he's just as quick to give credit to the Early Childhood Development (ECD) daycare center where the 14-month-old spends her days, while he and his wife, Milagos, are at work.

The other children in Gonzalez's friend circle aren't enrolled in daycare that emphasizes early childhood development. That, says Gonzalez, is what's given Paula a leg up.

"Paula has more developed language skills — a bigger vocabulary than the other babies. Most of them just want to be with their mother, but Paula is very independent.”

According to A World Ready to Learn: Prioritizing Quality Early Childhood Education, UNICEF's global report on pre-primary education, children who get at least one year of preschool are more likely to succeed in elementary and secondary school.

But just as important as education is to helping a child build confidence, there's no replacement for a parent's love — which Paula has in abundance:

“Milagos and I thought we were in love with one another, but you can’t believe the amount of love that you feel by becoming a parent," says Gonzales, who has this bit of advice for new dads. "Share every second you can with your baby. They grow up fast!”

In honor of Father's Day, here are a few more tips from some of our favorite dads who are doing a great job giving their children the healthiest, happiest start to life.

Babies need to learn how to be "good sleepers"

A full-night's sleep is the holy grail for new parents. But they may have to wait months before their new baby allows them a full five hours of uninterrupted shut-eye. The reason: Babies don't come into this world knowing that they are supposed to sleep at night and stay awake during the day.

What's normal for them is sleeping in bursts of three or four hours, waking up to breastfeed, then going down for another nap. When a baby is small there's no way around it. But as they get older, you can begin to adjust their schedule by giving them reasons to be awake and engage with you and the world. It's never too soon to start reading to your child, which will help their brains develop and give you precious time together. 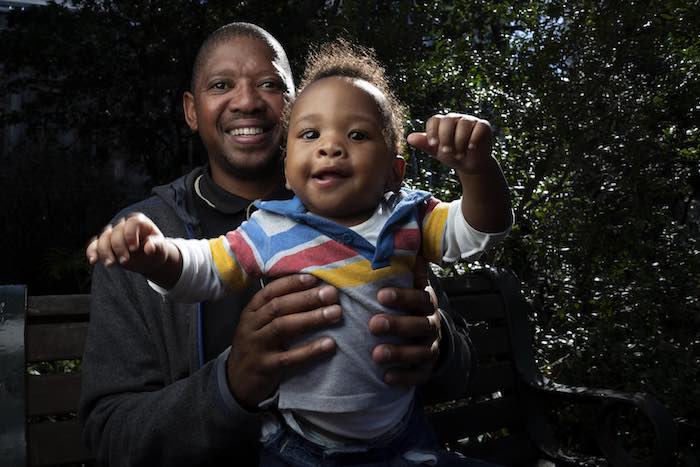 Bongani Ngqame, father of 8-month-old Khuma (above), has made his peace with exhaustion: “We don’t sleep like before! … [But our son] makes happiness in the house, even if we can’t sleep!” Alhough he's tired, the new dad is determined to make the most of every waking minute. When Khuma was born, Bongani took the maximum leave his employer offered — three to five days — then tacked on more

"I took two weeks off work so that I could be there to help Fezeka (his girlfriend). Fathers in previous generations were distant. Now we can chat with our children,” says Bongani, who wishes he and his dad had been able to bond that way.  “I would chat with my grandfather, but I couldn’t with my dad. We talk about it now, and he’s told me that he regrets things. I hope not to have those regrets with Khuma."

Did you know that babies begin developing memories as early as two or three weeks of age? That's how old children are, for example, when they start to remember your smell. Being there for your kids from the time they are born will make a difference that lasts a lifetime. 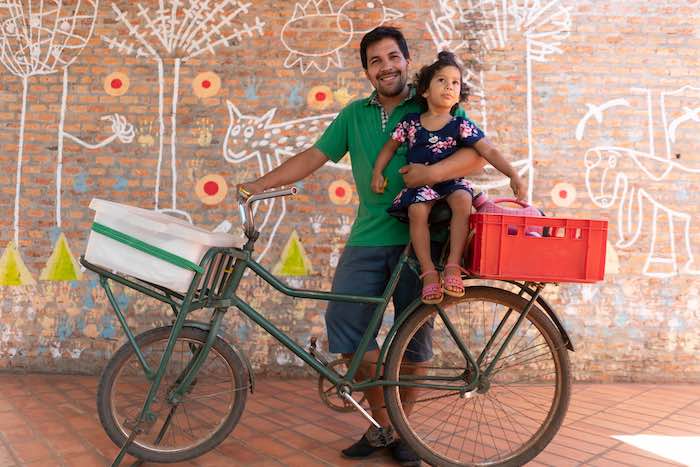 "Our families pressured us to be productive — to work a ton — and to make money," says Rafael Alfonso Araujo, here with his daughter 2-year-old Selva, atop the bicycle he uses to deliver the goods he and his wife, Luma, make at the bakery they own in Areguá, Paraguay. "But now I’m much more aware of the importance of being there for my kids — of being present.”

Rafael's priorities shifted once Selva and her 3-year-old brother, Amaru, began attending Torore, a UNICEF-supported Early Childhood Development Center. The father of two says the center has had a profound effect on the way that he and Luma are raising their family — and on Selva's development. The curriculum gives children a chance to learn by doing, which Rafael likes: “It makes for free thinkers, which we need more of.”

When they play, children learn how to explore, invent, create and collaborate with others. When kids play with their parents, the benefits for their brains are exponential.

"For very young children, all important learning takes place within the context of play," explains Harvard University's Dr. Jack Shonkoff. "Play can occur when you're feeding a child when you're changing a child's clothing when you are bathing a child. All of those interactions are opportunities for meaningful interactions. When you start playing, you are building brain circuits." 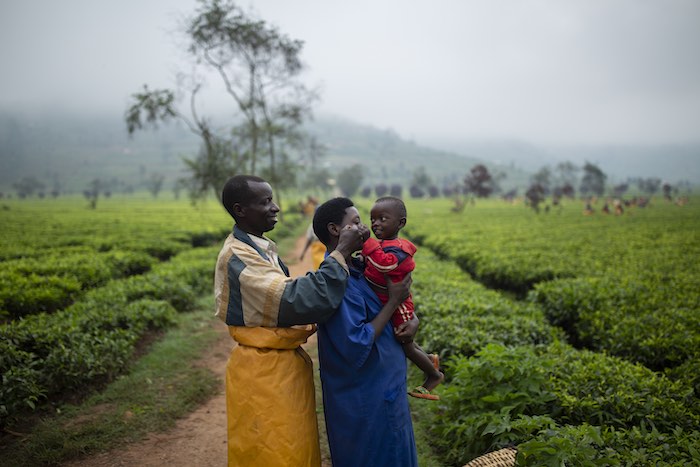 Christophe (above with his wife and son Kevin) learned the importance of taking an active role in his children's lives thanks to the UNICEF Rwanda Early Childhood Development center Kevin attends. In Rwanda, fathers have traditionally left the parenting to their wives. And Christophe was no different: "I didn't feed Kevin's older sisters when they were small. I didn't play with them as babies."

But thanks to the childcare, nutrition and hygiene training the center provides parents, Christophe now understands the rewards of proactive parenting: "I realize that the most important role of a father is to take care of them and make time for them. There's nothing more important than playing with your child; it helps with their brain development."

During the first few years of life, a child’s brain develops at a speed of more than one million new neural connections every second. This pace of rapid growth gives moms and dads a once-in-a-lifetime chance to shape a child’s ability to learn and grow. An equitable division of parenting responsibilities during these crucial years will show kids they are loved equally by both mom and dad and counteract gender stereotypes that can be limiting to both boys and girls. 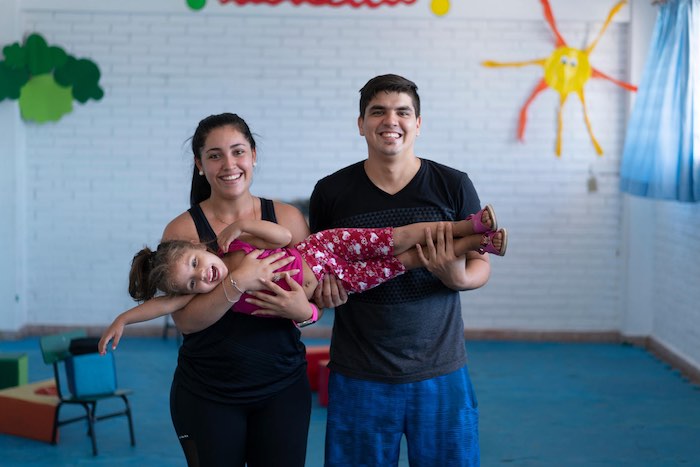 Leticia and David, above with their daughter, Xiomara, share the love and the chores. Xiomara, 3, attends a UNICEF-supported Early Childhood Development center,  just one minute away from the family’s shoe business in Paraguay's capital, Asunción. The daycare center has a special place in David’s heart because it's where he was looked after when he was Xiomara’s age. It’s also close to the shop, which makes drop-off and pickup easy for David, who doesn't believe parents should defer to traditional gender roles. “Leticia and I collaborate. That’s why you live with someone—to have a partner. Sometimes I cook, which is the way it should be.”

David grew up in a family that functioned outside traditional provider or caregiver roles. "Dad would always take me to school. Even if the sky was tearing itself apart with rains," he recalls. "That’s how I learned to be a responsible father.”

June 1, the Global Day of Parents, kicked off the first-ever global parenting month, a time to acknowledge all dads and moms around the world for their selfless commitment to love and nurture their children.

For over 70 years, UNICEF has been putting children first, working to protect their rights and provie the assistance and services they need to survive and thrive. With a presence in 190 countries and territories, UNICEF has helped save more children's lives than any other humanitarian organization in the world.

Top: Abdo Gonzalez is impressed with his daughter Paula's independence, a trait she's picked up at the Early Childhood Development (ECD) daycare center where she spends her days, while he and his wife, Milagos, are at work. All photos © UNICEF/Sokol