Still in lockdown to prevent the spread of COVID-19, vulnerable communities in India & Bangladesh now face the deepening consequences of the most destructive cyclone in decades.

UPDATE May 22, 2020: An estimated 10 million people in southern Bangladesh and 4.4 million in eastern India are reeling after Cyclone Amphan battered the region, destroying homes and crops and disrupting electrical and communication services.

Flooding and small landslides have been reported in several refugee camps in Bangladesh and half a million are homeless across the country, according to the United Nations. Amphan, the worst storm to hit the region since Cyclone Aila in 2009, caused an estimated $13.2 billion in damage in West Bengal, India and killed at least 84 people. 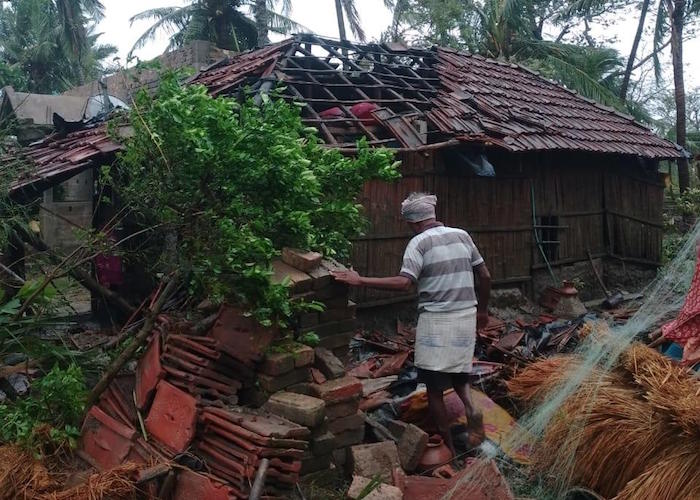 Residents of Sunderban, West Bengal, India are picking up the pieces after Cyclone Amphan tore through the region on May 21, 2020. UNICEF is working  with government and partners as part of the West Bengal Inter Agency Group. © UNICEF/UNI331578/West Bengal IAG

Cyclone Amphan descended on the eastern India and Bangladesh coastline on May 20 with sustained winds of 100 miles per hour, uprooting trees and destroying homes. Heavy rains and flash flooding are predicted in low-lying areas, and the storm is expected to hammer Kolkata, one of India's largest cities.

The region is home to 58 million people, including some of the most vulnerable communities in South Asia. At least 19 million children are at imminent risk.

UNICEF is working to ensure that coastal radio stations are broadcasting lifesaving messages and warnings to communities before, during and after the cyclone, one of the most violent storms in decades. Bangladesh evacuated up to 2 million people to 12,000 cyclone shelters as Amphan made its way across the Bay of Bengal. Another 650,000 people were moved to safety in the Indian states of Odisha and West Bengal.

But the emergency shelters themselves pose a second risk: the threat of being exposed to the novel coronavirus. More than 12,000 shelters in Bangladesh were equipped with, among other things, masks and sanitizers to prevent the spread of the virus. Social distancing, however, remains a challenge for those packed into shelters for safety.

The more than 850,000 Rohingya refugees crowded into the muddy camps of Cox's Bazar in southern Bangladesh have been on lockdown since March 14 to prevent the spread of the virus. The first case of COVID-19 in the Rohingya refugee camps was confirmed on May 14, raising fears of a large-scale outbreak in the densely populated settlements and surrounding communities. As of May 20, there were 26,738 confirmed cases of COVID-19 across Bangladesh and 106,750 confirmed cases in India.

The next few hours are critical! ⚠️

UNICEF is working vigilantly with the Government of Bangladesh to ensure that no one is left behind in the emergency response, such as minority groups, and is ready to work with partners to protect children and their families. UNICEF has prepositioned emergency lifesaving water, sanitation, hygiene and medical supplies to meet the humanitarian needs of up to 1.5 million people.

“We continue to monitor the situation closely,” said Jean Gough, UNICEF Regional Director for South Asia. “The safety of children and their families in the areas that will be impacted is a priority and it is good to see that the authorities have planned their urgent response factoring in the ongoing COVID-19 pandemic."

Your generous contribution will help UNICEF be there to protect vulnerable children and families.

Top photo: A UNICEF-supported Cyclone Preparedness Program (CPP) volunteer uses a megaphone to urge residents to evacuate to shelters ahead of the expected landfall of Cyclone Amphan in Khulna, Bangladesh on May 19, 2020. © UNICEF/UNI331280/Shanto/AFP