Hero Image for Children in Crisis.jpg

Today, protracted conflict, famine, poverty and forced migration threaten the lives of millions of people and the future of entire nations. Even worse, an extraordinary onslaught of natural disasters this year, including earthquakes in Mexico and hurricanes in Texas and the Caribbean, has tested the world’s ability to respond. But — when speed means the difference between life and death — UNICEF has an unparalleled capacity to deliver urgent aid to children and their families quickly and efficiently. Last year, for example, with decades of experience, UNICEF was able to respond successfully to 344 emergencies —a record number — in 108 countries.

Funds from the UNICEF Bridge Fund were the first to arrive, and it was very significant. The fund accelerated UNICEF’s ability to reach 40,000 individuals with immediate relief.

By accelerating funding after disaster strikes, the UNICEF USA Bridge Fund can enhance the timeliness of UNICEF’s emergency response, filling gaps between appeals, pledges or actual grants and immediate need. Bridge Fund donors contribute to a capital pool against which the Bridge Fund can borrow on a revolving basis, while impact investors provide us with low-risk loans in return for high-impact social returns. Like the Bridge Fund itself, our supporters believe that fast funding is the best funding when it comes to emergencies. 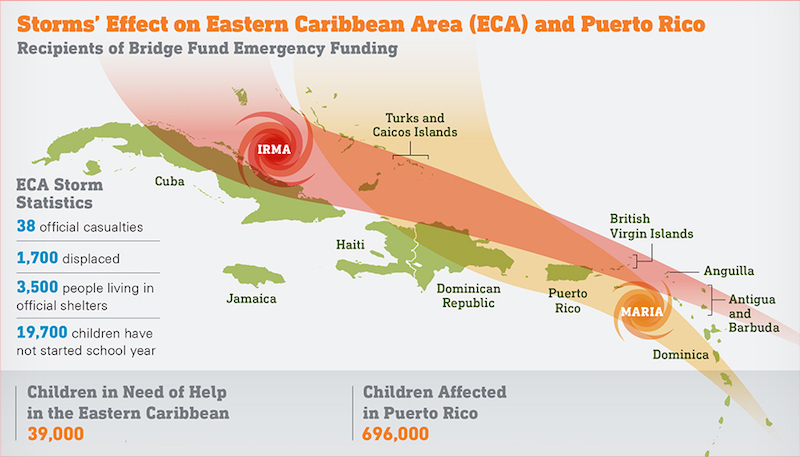 Charting the immense destruction of Hurricanes Irma and Maria in the Eastern Caribbean, this infographic details the islanda and countries affected by these overlapping storms. © UNICEF/2017

Not only is UNICEF on the ground as soon as disasters strike but, in the 157 countries where UNICEF operates programs, it is there beforehand, too. UNICEF pre-positions emergency supplies where they will be needed most, both for rapid response and financial efficiency. A UNICEF study suggests that investment in emergency preparation might save 50 percent in response costs, while facilitating more rapid response and saving lives. Post-emergency recovery, rebuilding and sustainable resilience are core components of UNICEF’s strategy, too. UNICEF’s “Build Back Better” approach is an example of this systemic approach to resilience, one that UNICEF believes helps ensure children both survive emergencies and thrive in following years.

Long after the immediate danger of an emergency has passed, UNICEF also works to restore and improve safe water and sanitation, health care systems and schooling, while protecting children from abuse, violence and exploitation. With country and regional offices in place, UNICEF brings another unique advantage to emergency response: well-established relationships with national, regional and local governments and non-governmental organizations. Analyzing risks in advance with partners and collaborating on emergency response plans can save lives in a crisis.

Quick, accurate damage assessment is key to UNICEF's emergency response strategy. UNICEF-commissioned aerial footage like this, after Hurricane Irma struck Barbuda, a Carribean island which falls under the operational jurisdiction of UNICEF's Eastern Caribbean Office, is vital to reaching the most vulnerable children quickly with lifesaving safe water, food, shelter and relocation services.

Given its expertise and preparation, UNICEF was able to spring rapidly into action when Hurricane Irma, a Category 5 storm, devastated the northeastern Caribbean, starting on September 6, 2017. Initially, 5.8 million people were affected, including more than 350,000 children.

“Strong winds and torrential rains barreled through some of the smallest and most exposed islands in the eastern Caribbean, including Anguila and Barbuda," explained Patrick Knight, Head of Communication for UNICEF's Eastern Caribbean Office. "As the extent of the damage became clear we saw severe levels of destruction. Our priority was to reach all those children and families in the affected communities as soon as possible.” 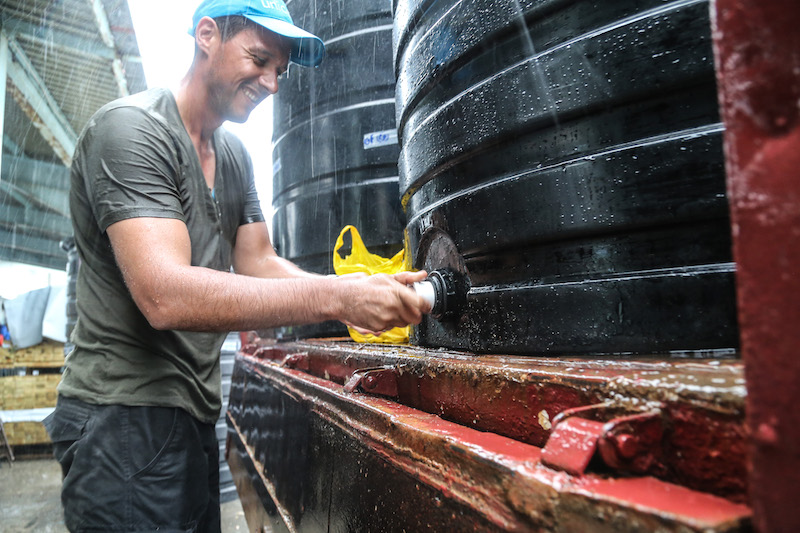 Despite the trailing effects of Hurricane Maria, UNICEF Supply Chain Specialist, Djani Zadi, loads water containers for distibution at the port of Roseau, capital of Dominica.  UNICEF's goal is to provide safe drinking water to families and communities as quickly as possible after a natural disaster. © UNICEF/UN0127068/Moreno Gonzalez

"The Bridge Fund is grateful to our supporters for their crucial help in accelerating UNICEF's response to Hurricane Irma and the dramatic difference they made in the lives of so many childre on the Caribbean islands affected by this terrible storm," said Erin Egan, Director of Bridge Fund Operations.

Top photo: On September 7, 2017 in Boba, Nagua, a boy, 7, stands in front of debris as Hurricane Irma moves off from the northern coast of the Dominican Republic. © UNICEF/UN0119399