Building on Polio — Strengthening the Immunization System in Chad

The world is closer than ever to eradicating polio. But with the three new cases in Nigeria, we must remain vigilant. Nigeria’s neighbor Chad is doing just that.

We can build on polio eradication achievements in Chad

The world is closer than ever to eradicating polio, with only 21 wild polio cases reported so far in 2016.

But with the three new cases that recently emerged in Nigeria in August 2016 on what would have been the two-year anniversary of no reported cases in Africa, we are reminded that we must remain vigilant. Many countries face the dual urgent concerns of continuing critical functions to safeguard a polio-free world, such as disease detection and rapid outbreak response, while at the same time reaching overall routine immunization goals as outlined by the Global Vaccine Action Plan (GVAP): 90% national immunization coverage and 80% coverage at district level.

One country that is balancing these tasks of preventing resurgence of polio while strengthening its routine immunization system is Nigeria’s neighbor Chad, who counted its last case of wild polio virus in 2012. Although circulation of the polio virus has been interrupted, Chad remains on high alert and is ever committed to preventing new cases.

Woman with baby and note.jpg 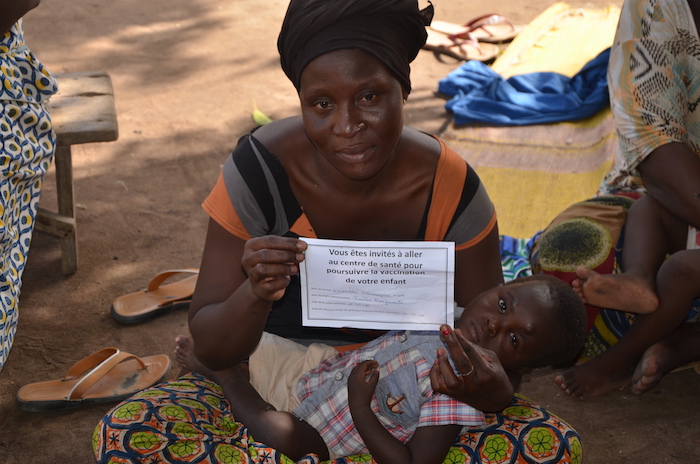 A mother receives an invitation from a community relay member to take her child for vaccination at the health center. © Soterine Tsanga/2016

As one of the largest countries in sub-Saharan Africa with a widely dispersed population, low literacy rates, ongoing security concerns (especially in the Lake Chad region), and a very weak health system, Chad needs to overcome many challenges to reach GVAP goals. In 2014 national DPT3 coverage was 55%, up from 48% in 2013, indicating improvements in the weak routine immunization program. In order to sustain the immunization rates of Chadian children and help avoid the resurgence of polio and prevent other diseases like measles and maternal and neonatal tetanus, the routine immunization system must be further strengthened.

Since 2013, Chad has revitalized the immunization program through the Reaching Every District Approach and close monitoring of its implementation, using polio assets to support the government in this effort. While more children have been vaccinated, the demand for immunization is still weak. To address this, Chad is currently implementing a promising approach to link health centers to communities by using the same resources that have been successful in combatting polio, complementary to the RED approach.

In order to keep the immunization rates high enough to avoid the resurgence of polio, routine immunization system must be strengthened.

In order to keep the immunization rates high enough to avoid the resurgence of polio and prevent other diseases like measles and maternal and neonatal tetanus, routine immunization system must be strengthened. Chad's answer to this challenge is to implement a promising approach to link health centers to communities, using the same resources that have been successful in combatting polio.

Getting communities involved in immunization

In Chad, community mobilizers are key. Nominated by local leaders and managed by health centers, these paid volunteers have been trained to educate their communities in local languages about the importance of immunization against polio. In an effort to build on the strengths of the polio program while increasing coverage for all immunizations, UNICEF Chad, with the Ministry of Health and partners, initiated the “Community Based Vaccination Promotion” approach in 15 districts.

This initiative uses the same volunteers who are trusted and trained from the polio program to go one step further: proactively seek out children who are being missed for their routine vaccinations and connect them to the health center.

Community relay members (APCVs) use community vaccination registers to monitor the immunization status of each child in the population. The program is intended to create social pressure and shared responsibility to keep children up-to-date on routine vaccinations, to increase communities’ understanding of the importance of vaccination and to stimulate demand for immunization. APCVs make visits to all homes in their respective assigned areas in order to:

The APCV’s also meet regularly with health center staff to understand reasons why coverage remains low in certain areas and make plans for improvement. This team approach of regularly monitoring, educating and engaging communities creates a stronger link to the health system that is mutually reinforcing.

Due to the APCV program, health centers are reporting increased demand for immunizations like they have never seen before. Across the 15 districts in phase 1, April to August 2016, the number of fully vaccinated children increased from 71,015 per month (as per pilot phase) to 95,067 per month. The 2632 ACPVs have identified and referred 150,869 children of whom 80,468 (53%) have been vaccinated and 30768 vaccination cards distributed.

In the N’Djamena region alone, a challenging area with an urban and transient population, 50% of children who had previously dropped out of the routine immunization schedule were mobilized and received vaccinations as a result.

Ms. Suzanne Kamandit Koutou, Manager of the Yalnas Health Center in Sarh, southern Chad, commented that the “community approach is a great victory because the understanding of the mothers [about vaccination] is increasing, leading to big results in a short amount of time. The health center relationship with the community is growing stronger.” 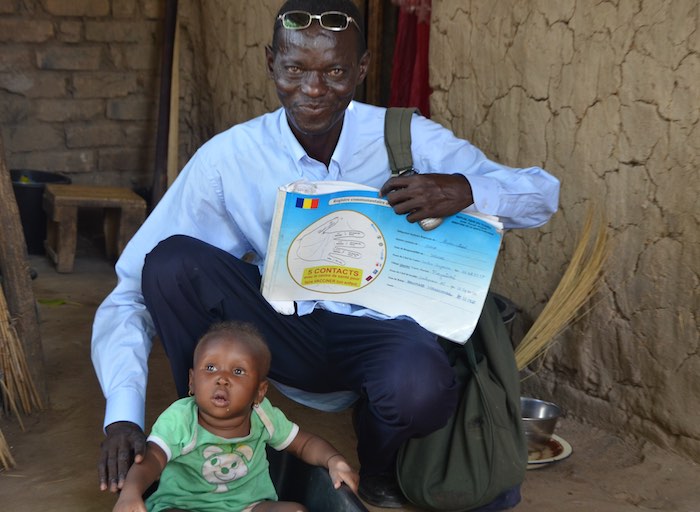 A community relay member with community register in Sarh, Chad, that enables him to review a child’s vaccination status. © Soterine Tsanga/2016

The APCV program is learning from early successes and challenges to improve performance in the coming year. Ongoing supervision, transport and monitoring of activities from the health center and district levels were identified as challenges due to the vast distances between the communities and shortage of workers who could help.

As demand for immunization is stimulated through the program, the supply chain will need more attention so that mothers who travel to health centers with their children will be able to access services.

Some initial lessons experienced by the program include:

Now is a critical opportunity to build on the polio program in Chad to strengthen routine immunization systems, lest recent gains will be lost. Recent success is fragile — Chad must continue the program in order to keep every child free from polio and other deadly vaccine preventable diseases.

Learn about nine-year-old Job, one of the last children in Kenya to contract polio, and Sabina — a vaccinator who will do whatever it takes to ensure that no child should suffer polio again — in our 360/VR film narrated by UNICEF Goodwill Ambassador Ewan McGregor.