Breaking Gender Norms From the Nile to the Red Sea

How a girl in Egypt found her dream job, with support from her family and UNICEF.

QENA, Egypt, 11 October 2018 – Donia Zakareya, 24,  was born in Qena, a city on the Nile just a few kilometers north of Luxor, in the Valley of the Kings. This region, known as Upper Egypt, is located along the Nile River in the southern part of the country. Though the area is known for its rich culture, it also clings to strict traditions, including common practices that limit opportunities for girls and women. Many girls are deprived of an education and discouraged from leaving their hometowns to pursue their studies or careers.

“Being a girl was the biggest challenge I faced in my career,” says Donia.

But with the help of a supportive, open-minded family, she would grow up to become the first female landscaping engineer in an Egyptian tourist resort. 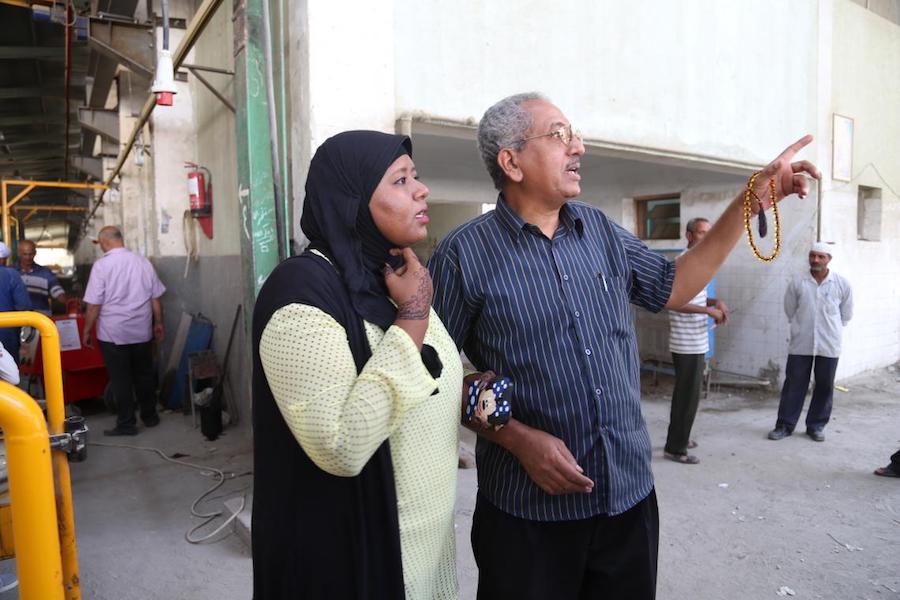 "Taking her to the factory as a little girl, I had no learning objectives," says Donia's father, Yehia Zakareya. "I was just a proud dad enjoying more quality time with my child. I am glad she learned many things that made her what she is today." © UNICEF Egypt/2018/Younis

Breaking into male-dominated fields from a young age

It all started at the railroad ties factory where Donia’s father, Yehia Zakareya, has worked since she was a child.

“She was four years old when she came here for the first time, and she was all over the place,” says Yehia. “Everybody here loved her and helped me keep her away from the machinery.”

As she grew, her father became her mentor. “He showed me how to write official letters, develop work sheets and other stuff,” Donia says. “This gave me an edge in all the student activities and volunteer work I joined later.”

Being a girl was the biggest challenge I faced in my career. — Donia Zakareya, 24

Donia went on to study agriculture at university and faced her first big gender hurdle when she chose landscaping as a major.

“Landscaping and fieldwork in general, which I loved the most, were considered exclusively for males,” says Donia. “There was a general belief among my peers that my only career options in agriculture were administrative jobs because I am a girl.”

But Donia’s professors were supportive, and encouraged her to pursue her dream. “My father is the only person who looks at me as if I’m all his achievements,” says Donia. © UNICEF Egypt/2018/Younis

The opportunity of a lifetime

As graduation approached, Donia knew that to stand out in the job market, she would need more hands-on experience so she joined a series of skills development training programs in Qena.

The training programs were offered through Meshwary (“My journey”), a UNICEF-supported project in collaboration with Egypt's Ministry of Youth and Sports that's partly funded by USAID.

After six months, through Meshwary, Donia was given an opportunity that would change her life: an interview at a large tourist resort. But there was one catch. The resort was over 300 miles away.

“A girl working and living far away from home is a frowned-upon concept in Upper Egypt. Some fathers won’t even let their daughters work in the same governorate,” she says.

I wanted to make them feel that their struggle against social norms and traditions to empower and defend me were worth it.

Donia was also worried that her interviewers would look down on her gender and background.

“I mean, who would agree to transport, accommodate and give a girl extensive training in landscape engineering, a male-dominated field, in an international hotel?”

To her surprise, she was accepted.

“I went directly to my dad and told him this was my dream opportunity,” says Donia.

Yehia was convinced to take up another fight for her against taboos.

“You go work there, and I will deal with your critics here,” he said. Donia started her job as landscaping engineer at the Hilton Waterfalls in Sharm El-Sheikh, Egypt in March 2018. She was pleased to discover that assignments at the resort were based on an employee's skills, interests and determination, not gender. © UNICEF Egypt/2018/Younis

From the Nile to the Red Sea

Donia started her training at the Hilton Waterfalls in Sharm El-Sheikh, Egypt in March 2018. A month later, she received a job offer as a landscaping engineer at the same resort.

Even though this was her dream job, the decision to accept it wasn’t an easy one.

“Moving to Sharm El-Sheikh, far away from my family home, was the biggest decision I had to make in my life,” she says.

“I thought about some of my peers from Upper Egypt who also got job offers [in other fields] at Hilton, but couldn’t accept them because their parents wouldn’t allow them to move out to Sharm El-Sheikh,” she says. “I suddenly had a strong feeling that I needed to go and achieve something out there not just for myself, but for my supportive parents. I wanted to make them feel that their struggle against social norms and traditions to empower and defend me were worth it.”

Today, Donia is thriving in her new job. And her initial worries that she would be given mainly administrative tasks did not materialize.

“The greatest thing happened: We all had equal chances! Our capabilities, determination and interest were the only criteria of our assignments,” she says.

At a recent Meshwary event for International Youth Day, Donia gave a speech in which she called for girls who feel less confident because of their gender, color or hometown to keep fighting.

“Show the country and the world that Upper Egypt’s girls can work and develop their careers. Show them we’re capable of doing anything and everything.”

Find out more about what UNICEF Egypt does for adolescent development.