Blog from the Field: Kite String Connects Us All | UNICEF USA

Blog from the Field: Kite String Connects Us All

In a rowdy, boisterous celebration of what it means to look out for each other, a group of villagers in the Luang Prabang province of Laos taught us that we are all connected by kite string. The lesson started as a group of Kiwanians and UNICEF officials visited Laos to see firsthand how the joint project to eliminate maternal and neonatal tetanus was progressing.

On the second day, we travelled by boat to a village only accessible by river. Our guides docked the boats on the shore, and we disembarked to climb up the hill to the village. As we followed a trail through the dense forest, we heard the sound of slow, rhythmic clapping. It was the villagers. Children and adults lined both sides of the trail to welcome us. As we passed, they stepped forward to present bouquets of beautiful wildflowers to us. 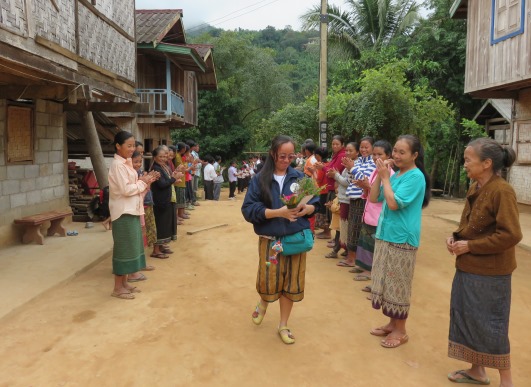 Exiting the corridor of villagers, a wide dirt path ran through the center of the village. Roughly 40 buildings with thatch walls and roofs lined the path. A makeshift medical center —marked by a large blue tarp—stood in the middle.

The scene was moving as the medical team acted with efficiency and precision to administer immunizations. Moms, dads and kids in attendance behaved as they would in my hometown. Yet, the physical surrounding reminded me that the situation was vastly different. 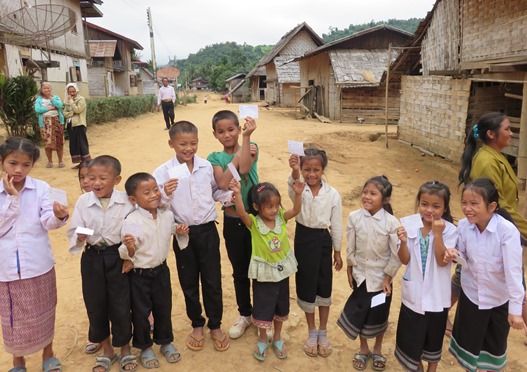 Once the immunizations were complete, the village leaders escorted us into a building and invited to sit on the floor in the center of the room. Perhaps 30 villagers took seats around us. Quiet laughter and smiles marked the occasion. One man read remarks from a handwritten sheet, drawing good natured chuckles from the crowd when he faltered.

Then an older man assumed a kneeling position and began chanting. When he finished, he called for the string. It was ordinary kite string, wrapped around an empty water bottle. As the man passed the bottle to me, I took hold of the loose end, unwound some string and passed it to the person on my left. 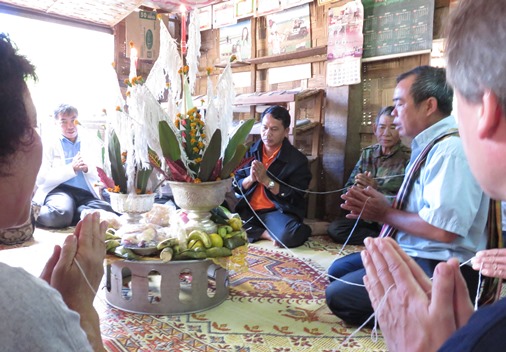 When the string had made it around the room, the man spoke. Our guide whispered to reach forward and touch the people in front of us so all would be connected. The man spoke again, and our guide invited us to make wishes for the future.

My single wish was simple and embodied the reason for our visit:

Good health for everyone in the village. Forever.

A few more words, and the string was collected. The villagers pressed upon us in a happy, noisy, mass movement. Wearing grins and speaking words I couldn’t understand, they tied short lengths of the kite string around our wrists. Each string represented that villager’s wish for us. 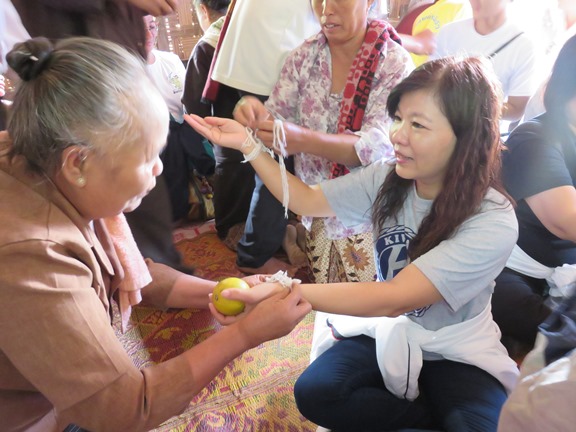 As one after another tied string around my wrists, I felt their wishes were as heartfelt as the wish I made for them. My colleagues and I grinned as we displayed our newly decorated wrists, relishing the moment and our new connections. 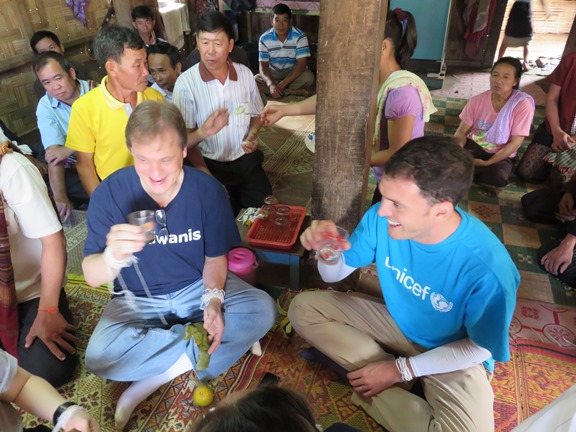 The ceremony ended with ceremonial drinks and a feast. As we left the village, three little girls followed us to the river bank and shouted "I love you!"

We were told to keep the strings intact for three days or the wishes would not come true. After four days, not one member of our group had removed their strings. On the fifth day, I boarded a plane, the wishes of a Lao village still decorating my wrists.

I eventually cut the strings off, but I still remember the important lesson the villagers taught me. Kiwanians are connected to anyone who wishes for health and prosperity for others. It doesn’t matter how far the connections reach. Kite string will do the job.