Political instability and migration back and forth along the porous, rugged border between the two countries has made it difficult to reach every child with the polio vaccine, the only form of prevention against the highly infectious, paralyzing and sometimes fatal disease.

The wild poliovirus remains endemic in only two countries: Afghanistan and Pakistan

Health workers in the region face another hurdle: religious and cultural norms forbidding unrelated men from entering a household make many mothers reluctant to open the doors of the family compound to male vaccination teams.

The solution? Female vaccinators, many of whom are mothers themselves, play a key role in encouraging parents to immunize their children against preventable diseases, building community trust and reaching children who might otherwise be missed.

Protecting Afghanistan's children from polio, one household at a time

In the video above, UNICEF Communication Specialist Veronica Houser joins a team of female polio vaccinators as they go from house to house in Afghanistan's Herat Province, vaccinating children under 5 during a national polio immunization campaign.

There is no cure for polio, only prevention

Each vaccination team visits around 120 households per day, explaining to parents that there is no cure for polio, only prevention.

"Polio is a type of virus to which children under 5 are more vulnerable," says Morvarid, one of the vaccinators. "We must vaccinate children so they do not get the virus. If a child gets the virus, they will become permanently disabled." 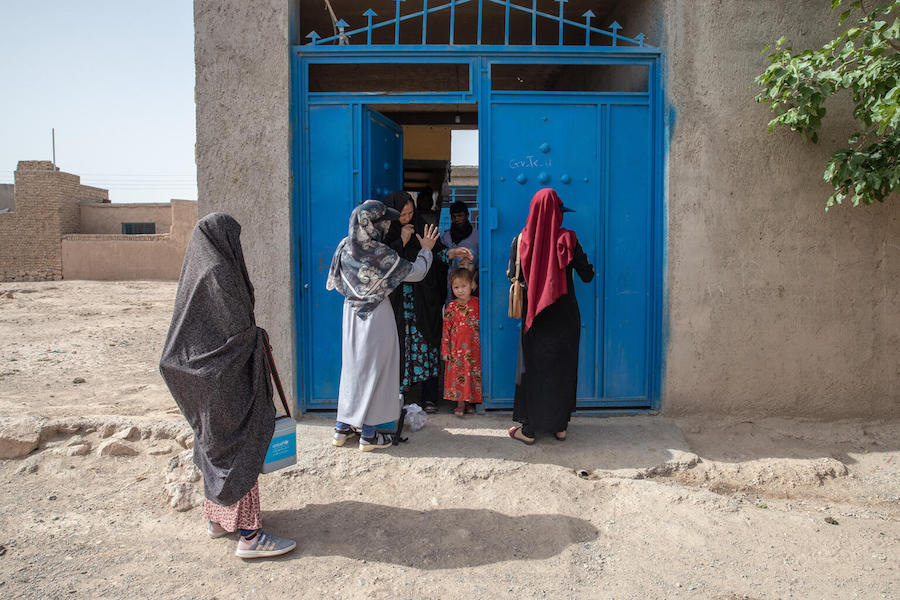 As long as polio exists anywhere in the world, the unvaccinated everywhere remain at risk: the poliovirus is just a plane ride away.

This year, new polio cases have been reported in places that have been polio-free for years, if not decades — the result of falling childhood vaccination rates caused by health system disruptions related to the COVID-19 pandemic, the difficulty of reaching children uprooted by conflict, and vaccine misinformation.

The goal of eradicating polio is still within reach

Despite recent setbacks, the goal of eradicating polio is still within reach. UNICEF and other GPEI partners are doubling down on efforts to reach every child with polio vaccines, so that no child will become paralyzed or pass along the disease to others in their community.

"The new detections of polio this year in previously polio-free countries are a stark reminder that if we do not deliver on our goal of ending polio everywhere, it may resurge globally, " Dr. Tedros Adhanom Ghebreyesus, WHO Director-General, said at the World Health Summit on October 18. "We must remember the significant challenges we have overcome to get this far against polio, stay the course and finish the job once and for all."