KRISTEN JONES IS THE VICE PRESIDENT FOR MAJOR GIFTS AT UNICEF USA. 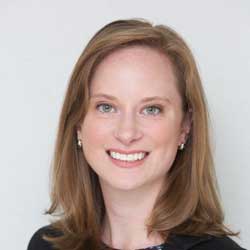 Kristen Jones is responsible for leading major gift fundraising across the country as well as UNICEF NextGen and Community Fundraising.

Previously, Kristen was Vice President for Regional Fundraising with responsibility for UNICEF USA’s nine regional teams. From 2009 to 2013 Kristen served as the Managing Director for the New England Region working in partnership with the regional board to grow UNICEF USA’s presence in the region through major donor fundraising, special events, and educational opportunities. Kristen has traveled extensively with UNICEF in Latin America, the Caribbean, Africa, and the Middle East.  Kristen joined UNICEF USA in 2005.

Kristen has over fifteen years of experience working in non-profits, including professional positions at Boston Ballet and Museum of Fine Arts, Boston.  Kristen also held several volunteer leadership positions with the human rights organization Amnesty International USA, including a term as the chair of the board nominating committee.

Kristen graduated from Simmons College in Boston with a Bachelor’s degree in Economics and International Relations.  She lives in San Francisco.